The LCR Honda rider escaped serious injury in a huge high-side crash during qualifying on Saturday, but was kept under observation at the Centre Hospitalier du Mans before being released just in time to take part in Sunday morning's warm-up.

From 13th on the grid, he eventually finished in eighth place, 25 seconds down on victorious Honda stablemate Marc Marquez.

Crutchlow said he had initially thought he broke his pelvis in the qualifying crash, and explained that he had to remain in hospital because he had "blood on the lung".

"I had a contusion to my pelvis area, I thought my pelvis was broken because my internal around my stomach area was really sore at the track and in the medical centre," he recalled.

"I had a CT scan, it found there was a problem with the lung, the proteins of the heart were not good, that was another reason they kept me in. A contusion sends your heart protein strange, apparently."

Crutchlow said he was on oxygen "for quite a long time" on Saturday and "didn't feel great" when he made it to the track on Sunday "because I got no sleep" during his hospital stay.

"Lucio [Cecchinello, team boss] and Lucy [wife] didn't leave the place until midnight, then I had to be woken every two hours for my blood," Crutchlow explained.

"Finally we were trying to check out [of the hospital] at around 6.30am, we didn't get out until about 8.40am.

"Then I didn't think I would be racing, because I thought we would either be arrested or be in a car crash with Lucio driving! But he made it." 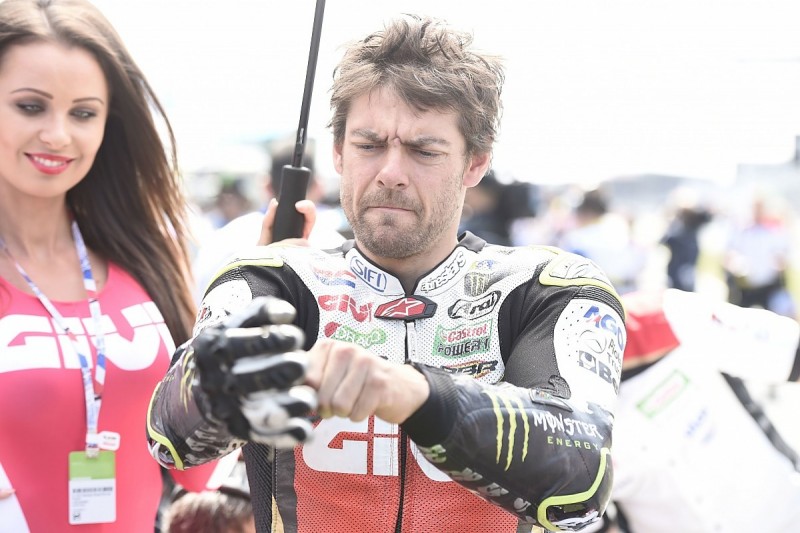 Crutchlow said he knew he would be "in trouble" if he fell again in the race, which meant he took it steady for the majority of the distance.

The Briton also admitted he had difficulty breathing as a result of his crash.

"The whole race I was unable to breathe very well, as you can imagine with blood on the lungs and the situation that there's been," he revealed.

"I was just not willing to push at the start of the race. For the first 15 laps I was just riding around, making sure I stayed on the bike. If I crashed I would have been in trouble.

"But once I started to feel comfortable, with 10 laps to go, I started to push a little and was able to pick some riders off.

"In the end I had good pace this weekend, it's just a shame I made the mistake in qualifying.

"I could have been on the podium, because I was faster than [Danilo] Petrucci on Friday and he finished second to Marc."