On MotoGP's first-ever visit to the Buriram circuit - which will play host to the inaugural Thailand Grand Prix later this year - Crutchlow proved the benchmark, setting a 1m30.797s with a little under 40 minutes to go despite suffering a crash earlier in the day.

It was works Honda man Marc Marquez that led the way for the bulk of Friday's running, cementing his position at the top of the timesheets with a 1m30.912s just after midday, and that time wasn't challenged until a flurry of late improvements came in the final hour.

Besides Crutchlow, the only other man to beat Marquez was Rins, who leapt from fourth to second with a time of 1m30.809s aboard the Suzuki.

Andrea Dovizioso, second behind Marquez for much of the day, was fourth on the best of the Ducatis, just a tenth-and-a-half slower than Crutchlow.

Dovizioso trialled a new type of aerodynamic fairing for the first time, while works team-mate Jorge Lorenzo - who was 10th-fastest - had his own variant to sample. 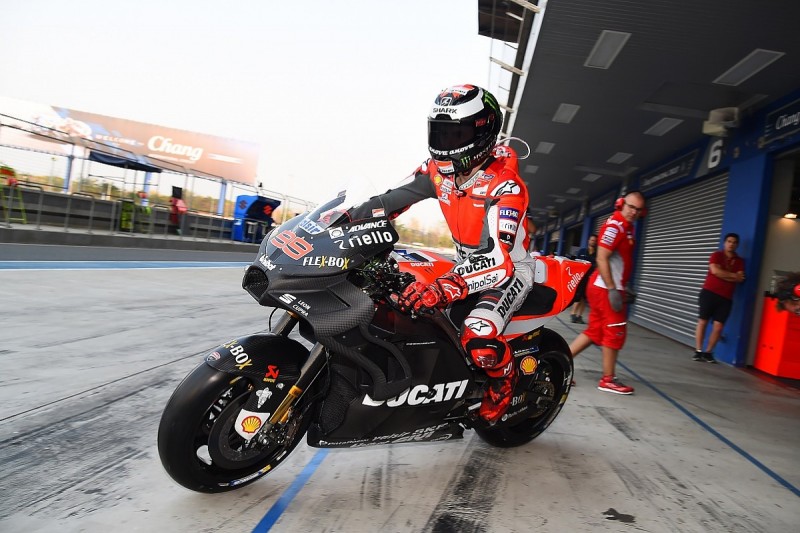 A late improvement by Dani Pedrosa on the second works Honda made it three Hondas in the top five, ahead of Pramac Ducati pair Danilo Petrucci and Jack Miller.

Valentino Rossi was top Yamaha in eighth, 0.392 seconds off the pace, ahead of the second Suzuki of Andrea Iannone and Lorenzo.

Maverick Vinales could do no better than 11th, fractionally ahead of Tech3 Yamaha man Johann Zarco.

Aleix Espargaro was best of the Aprilias in 15th, while Bradley Smith led the charge for KTM in 20th in the absence of team-mate Pol Espargaro.

KTM tester Mika Kallio, deputising for Espargaro, had his day cut short by a major high-side and was taken to the medical centre for checks, finishing up 23rd.

In his first-ever MotoGP outing, Malaysian rider Hafizh Syahrin - who is in line for Jonas Folger's vacant seat at Tech3 - was 24th and last, 2.368s off the pace.