Andrea Dovizioso remained on top in third practice for MotoGP's Thailand race, as Marc Marquez crashed and consigned himself to a place in the first part of qualifying

After setting the pace in Friday's second session, Dovizioso was again fastest on Saturday morning at new-for-2018 venue Buriram, leaving it late to set the best time of 1m30.399s.

Marquez had been first to beat the Italian's FP2 benchmark, with a 1m31.079s that remained the time to beat until the final 10 minutes when Jack Miller (Pramac Ducati) leapt to the top with a 1m30.566s.

That time proved good enough for second only to Dovizioso, while Yamaha's Maverick Vinales led the charge against the Ducatis just a further tenth behind Miller.

As more and more riders set times with the soft rear tyre, Marquez slipped down the order, and after the reigning champion abandoned his penultimate run after running wide at the last corner, he had been bumped out of the top 10. 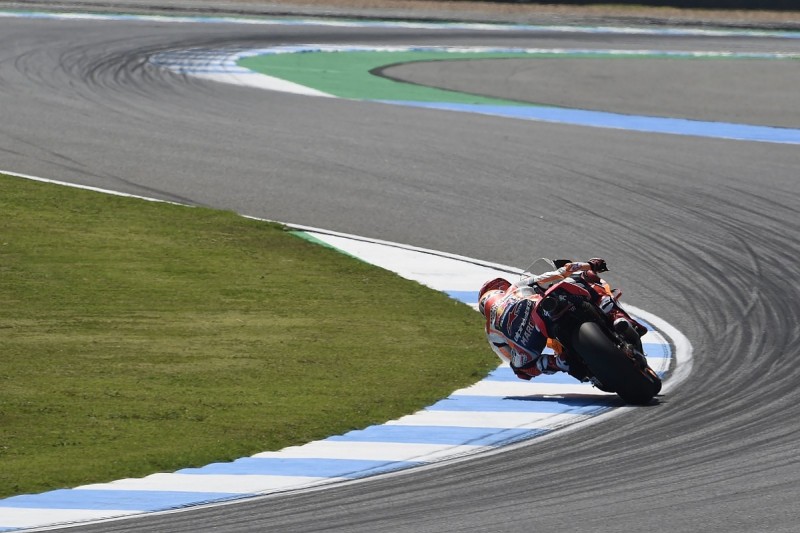 The Spaniard barely made it out of the pits in time for one more flying lap, crossing the start/finish line with seconds to spare, but lost the front end of his works Honda at Turn 4 and crashed.

His previous time was good enough only for 11th, 0.064 seconds short of the automatic Q2 cut-off.

Cal Crutchlow took over the mantle as top Honda runner in fourth place, ahead of Danilo Petrucci (Pramac) and the lead factory Honda of Dani Pedrosa.

Alex Rins struggled to match the pace of Suzuki stablemate Iannone, ending the session in 16th behind both KTMs and the leading Aprilia of Aleix Espargaro.

Jorge Lorenzo did not take part in FP3 after his monster crash on Friday afternoon, which left him with a hairline fracture in his left wrist. He will take no further part in the Buriram weekend.