Yamaha rider Rossi set his 1m55.162s benchmark with a minute left on the clock, edging Marquez, who had held first place for the final three of the test's eight hours, by 0.018 seconds.

Rossi's team-mate Maverick Vinales made up the top three as Yamaha tested a new aero fairing on the YZR-M1. 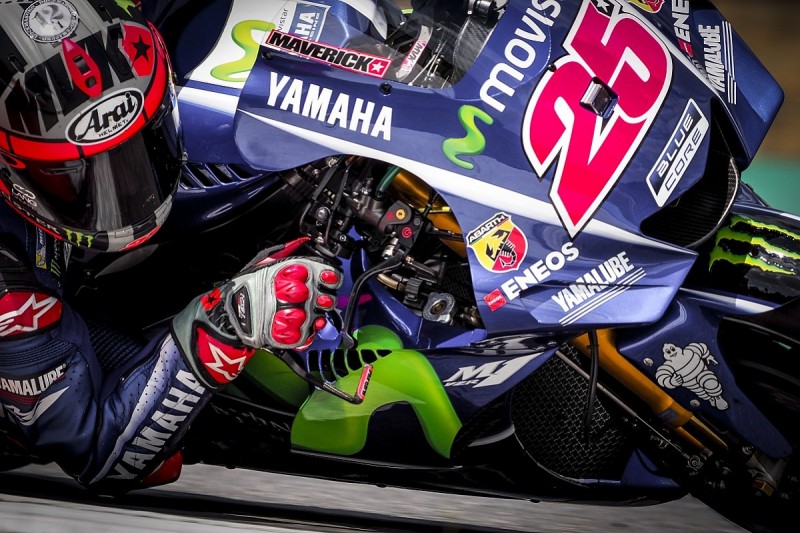 Vinales led the way for the majority of the session and improved his lap time late on, but ultimately could not outpace Rossi and Marquez.

Jorge Lorenzo took fourth, while his Ducati team-mate Andrea Dovizioso was only 11th.

Dovizioso ran with Ducati's radical new fairing, which was introduced for the Czech GP but used only by Lorenzo over the weekend, for the first time.

Tech3 Yamaha's Johann Zarco was fifth, followed by Cal Crutchlow, who was close behind Vinales in second in the early stages but didn't ride in the second half of the test as he rested his back after his Saturday crash.

Andrea Iannone was the fastest of three Suzukis, as the two full-timers were joined by test rider Takuya Tsuda.

Though Iannone crashed in the morning and spent the majority of the day in the bottom half of the order, a late improvement put him ninth.

His team-mates Alex Rins and Tsuda were 14th and 18th respectively.

Aleix Espargaro completed the top 10 for Aprilia, while the KTMs of Pol Espargaro and Bradley Smith were 15th and 16th.

Ducati satellite teams Pramac, Aspar and Avintia did not take part in the test.