Quartararo took the lead on lap five of 20 and eased away from the rest of the field to open up a gap of 65 points in the championship over reigning world champion Joan Mir, who was ninth in the race.

Honda’s Pol Espargaro converted his first pole for the Japanese marque into the holeshot at the start with Quartararo and Aleix Espargaro on the Aprilia slotting in behind.

After a sluggish launch, Francesco Bagnaia threw his Ducati up the inside of Quartararo and Aleix Espargaro take briefly take second from them, while drama unfolded behind.

After a near-miss at Stowe between Pramac’s Jorge Martin and Marc Marquez, the Honda rider made contact with Martin at Club corner and took both out of the race.

Aleix Espargaro took second away from Bagnaia at Brooklands at the end of the first lap to make it an Espargaro 1-2 as the leaders roared onto the second tour.

The top four of Pol and Aleix Espargaro, Bagnaia and Quartararo already had six tenths between themselves and the pack behind on the second lap.

Quartararo demoted Bagnaia on the following tour before passing Aleix Espargaro moments later to lead the chase on the Honda-mounted Pol Espargaro.

On lap five Quartararo scythed up the inside of Pol Espargaro at the fast Farm left kink to take the lead, with the Yamaha rider immediately moving six tenths out of reach now in clean air. 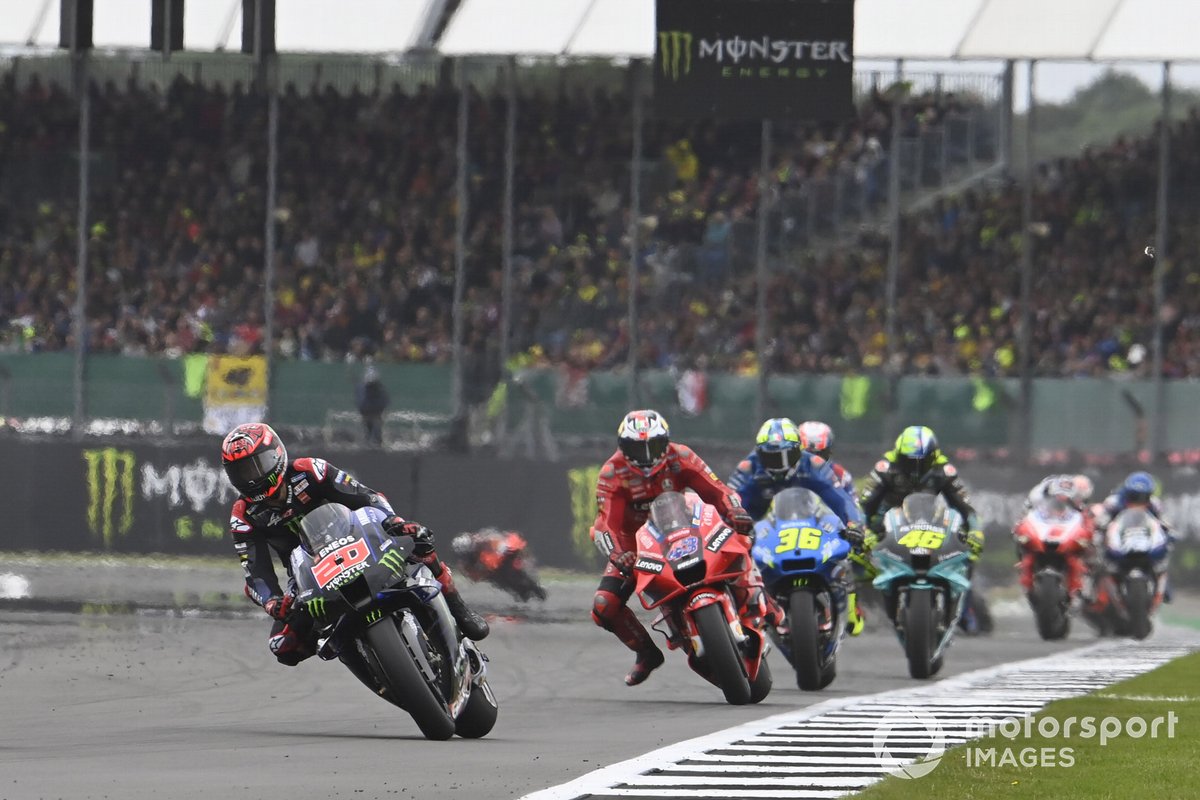 Aleix Espargaro found his way through on Pol at the Vale on lap six, but Quartararo was easing away at the front and would quickly find himself over three seconds clear.

Able to manage his tyres at the front of the field, Quartararo eased to his fifth win of a 2021 campaign he is fast taking control of.

Suzuki’s Alex Rins had worked his way up to second at just over mid-distance and stage-managed his race from that point to keep a hold of the runner up spot.

Jack Miller put on a late charge for the podium on his factory Ducati and piled the pressure on Aleix Espargaro in the closing stages.

The Australian launched a raid on third into the Village corner on the final lap, but Espargaro drew alongside on the outside and cut back underneath Miller at the Loop to retake the position.

Running a defensive line through Brooklands and Club, Espargaro fended Miller off by 0.149 seconds to secure the first-ever podium for Aprilia in the modern MotoGP era – and Espargaro’s first in the premier class since Aragon 2014.

Pol Espargaro completed the top five for his best result of his debut Honda season, with Brad Binder making a late charge for sixth on the factory KTM.

Johann Zarco had a difficult afternoon in 11th on the Pramac Ducati, with Avintia’s Enea Bastianini and LCR’s Takaaki Nakagami shuffling Bagnaia back to a mystifying 14th.