Ahead of the session, Aprilia announced Lorenzo Savadori has been withdrawn from the remainder of the British GP as he continues to struggle with the broken ankle he suffered in a fiery Styrian GP crash.

The cooler conditions for FP3 at Silverstone meant the combined timesheets went largely unchanged for the first half of the 45-minute session.

After 25 minutes only reigning world champion Joan Mir in 12th, LCR Honda’s Takaaki Nakagami in 14th and Pramac Ducati’s Johann Zarco in 15th had improved on their Friday lap times.

Moments late Aprilia’s Aleix Espargaro made the first significant improvement as he moved up to third overall with a 1m59.840s.

With just over 11 minutes to go, Quartararo’s Friday benchmark was finally toppled by Ducati’s Miller.

The Australian – who was second overall after Friday – found himself with Suzuki’s Rins as a reference ahead of him and produced a 1m59.288s to go fastest of all.

In the closing stages, the timing screens were awash with session-best sector times as the field put on their charges for a direct spot in the Q2 qualifying session.

But no one could topple Miller’s time, Aprilia’s Espargaro his closest challenger with a 1m59.386s – the Spaniard just 0.098 seconds adrift. 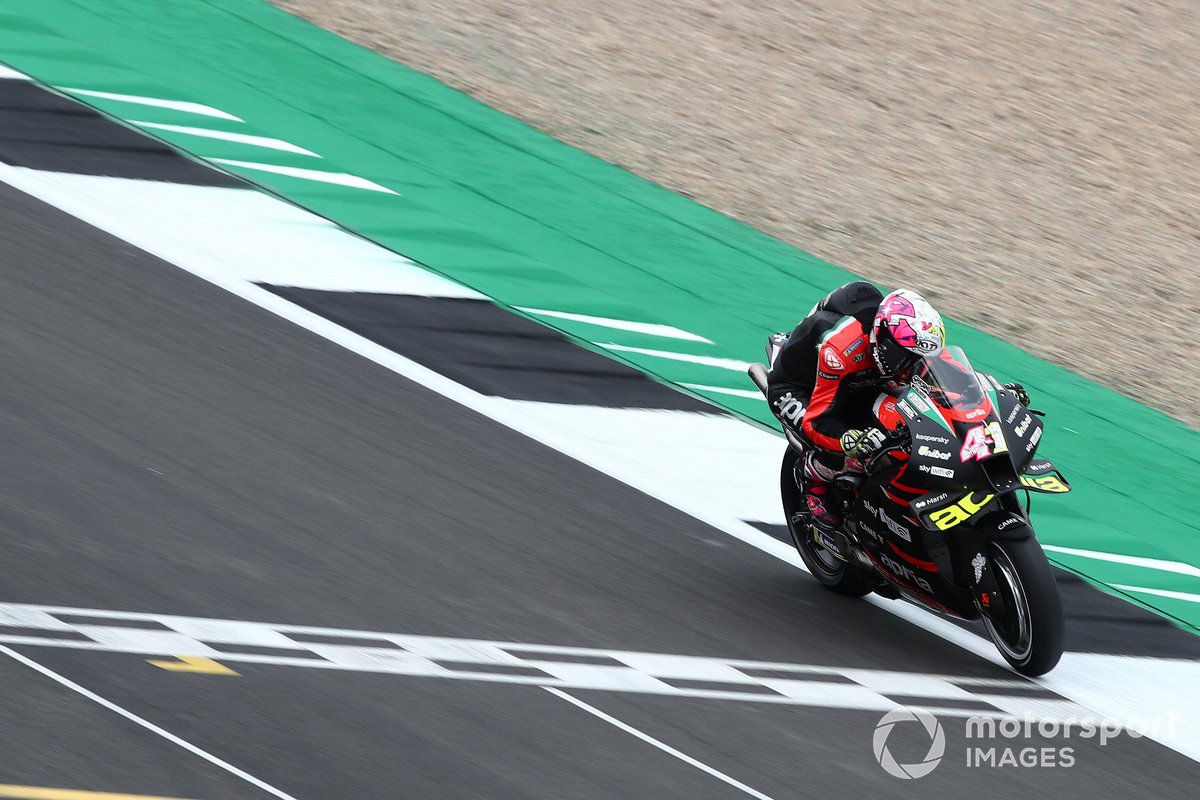 Pramac Ducati’s Jorge Martin leaped up to third late on ahead of Yamaha’s Fabio Quartararo, the championship leader remaining second on the combined times courtesy of his 1m59.317s lap from FP2.

Francesco Bagnaia completed the top five on the second factory Ducati ahead of Honda’s Pol Espargaro, who bagged a place in Q2 despite a late crash at Stowe.

Valentino Rossi felt he had to find a second on his Friday best to make it into Q2 on Saturday and did exactly that in FP3, the Petronas SRT rider producing a 1m59.553s to go seventh quickest ahead of Mir, KTM’s Brad Binder and Honda’s Marc Marquez.

Johann Zarco will face a volatile Q1 session later this afternoon, with the Pramac rider set to be joined by the likes of Yamaha’s Cal Crutchlow – who did run as high as ninth at one stage before dropping to 13th – and Rins, who crashed at Farm curve late on while on a flying lap.

KTM’s Miguel Oliveira continued to struggle at Silverstone in FP3 and was only 19th on his factory RC16, 1.5s off the pace, while Tech3 counterpart Danilo Petrucci in 17th suffered a mechanical failure at the end of the session.

MotoGP debutant Jake Dixon suffered his first tumble 15 minutes into FP3 when he slid off at Brooklands, with the SRT rider ending the morning in last spot.