Pol Espargaro snatched a first MotoGP pole position as a Honda rider in a British Grand Prix qualifying that ended in confusing fashion following a false pole for Jorge Martin.

Pramac rookie Martin was clocked at posting a 1m58.008s lap at the end of Q2 which smashed the lap record and put him over eight tenths clear of the field.

However, this lap was eventually scrubbed after the chequered flag when that time was incorrectly registered after Martin cut the chicane at the Vale section of the Silverstone circuit.

Suzuki’s Joan Mir set the early benchmark at the start of Q2 with a 2m00.237s, with the Aprilia of Aleix Espargaro shadowing him by 0.020s.

Jack Miller dropped the lap times into the 1m59s with a 1m59.640s on his factory Ducati, but Quartararo blew this out of the water with his first flying lap.

The factory Yamaha rider set the fastest lap of the weekend to that point with a 1m58.990s, Quartararo’s advantage standing at 0.270s over Ducati’s Francesco Bagnaia at the conclusion of the first runs. 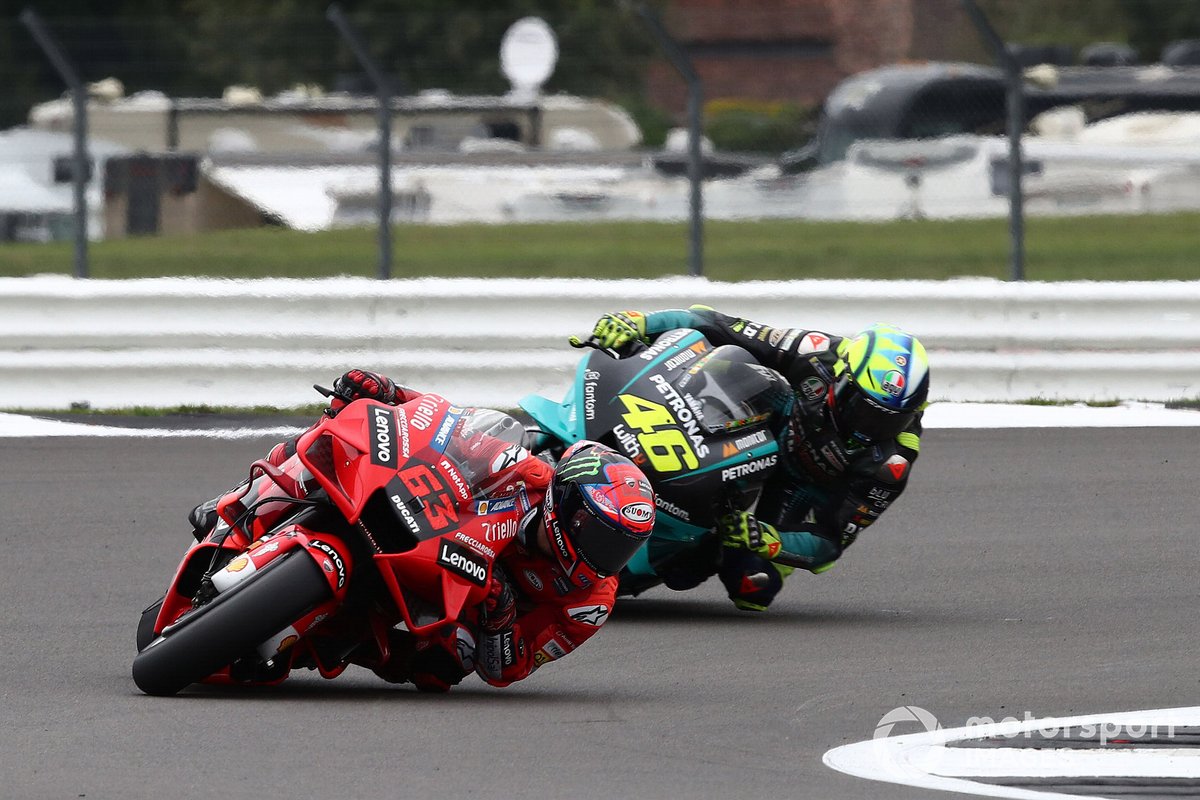 With just over 30 seconds left on the clock Honda’s Espargaro fired in a 1m58.889s to snatch pole position away from Quartararo, with the Yamaha rider shuffled back to third by Bagnaia.

After the confusion over Martin’s lap was corrected, Espargaro was promoted back to a first pole for Honda amidst a difficult season for the Japanese manufacturer.

He heads Bagnaia by 0.022s, with championship leader Quartararo completing the top three.

It marks Honda's first pole in MotoGP since Aragon 2020, and the first for the Repsol Honda squad since 2019.

Martin was initially dropped back to sixth once the timing screens had been corrected, but was then pushed up to fourth ahead of the sister factory Honda of Marc Marquez and Aprilia’s Aleix Espargaro.

Miller was shuffled back to seventh come the chequered flag ahead of Petronas SRT’s Valentino Rossi and Q1 pacesetter Johann Zarco on the Pramac Ducati.

Avintia rookie Enea Bastianini was on course to progress into Q2 for the first time, but a late crash at Farm curve in Q1 resigned him to 13th following improvements for Rins and Zarco.

Bastianini will head team-mate Luca Marini on their two-year-old Ducatis, while LCR’s Takaaki Nakagami could do no better than 15th on his works Honda.

Danilo Pertucci was 16th on the Tech3 KTM ahead of Alex Marquez on the sister LCR Honda, while home hero Cal Crutchlow was only 19th on the factory Yamaha behind the sister Tech3 KTM of Iker Lecuona.

The struggling Miguel Oliveira will line up a disappointing 20th on the factory KTM, with Jake Dixon making his first ever MotoGP start from 21st on the SRT Yamaha.