Marquez overhauled Suzuki's Andrea Iannone with four minutes left on the clock in the eight-hour session, posting a 1m38.916s - a lap time that would have been good enough for third on the grid for Sunday's race.

The status quo out front remained unchanged for a long time, before Marquez - who trialled a black-liveried prototype Honda RC213V during the day - took second from Rabat with just over half an hour left to run.

Marquez then sped up again, beating Iannone's long-standing benchmark by 0.104 seconds, with Rabat remaining best of the rest in third, 0.446s off the pace. 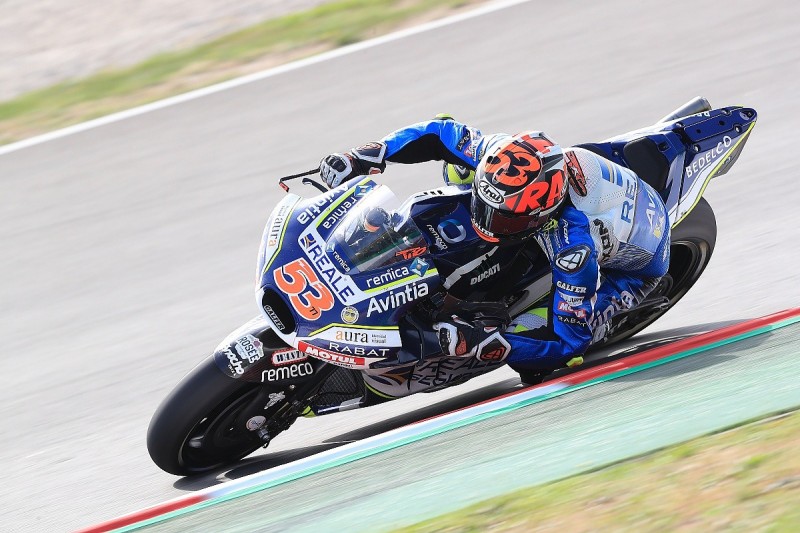 With Ducati works riders Jorge Lorenzo and Andrea Dovizioso skipping the test, the firm provided "new things to try" for Pramac's Danilo Petrucci - who will replace Lorenzo in the factory team next year.

Petrucci placed fourth, but his day had come to an early end when he crashed out at the high-speed Turn 9 right-hander.

"I'm fine, just a crash, was a low-side at Turn 9, but when [I] arrive on the gravel, there is always a little step between the grass and the gravel and I start to get round, round, round," Petrucci explained.

"I start to feel very, very bad with my feet, but no fracture, so that's important, even if my foot is getting bigger and bigger.

"Anyway, I'm so sorry, because it was my first test to try new things for Ducati factory, and the most important thing, I crashed with this.

"Fortunately, I'm OK, and the majority of the test we have done, so I'm happy because I was even quite fast."

Tech3 Yamaha rider Johann Zarco had briefly taken the lead from Rabat early on, but was shuffled down the order, ending the day in fifth.

Vinales and factory team-mate Valentino Rossi ventured out on track relatively late in the eight-hour test, and spent most of it outside the top 10, with the Italian eventually settling for 14th.

A new, larger-profile front tyre was made available to riders in the test by supplier Michelin, with Iannone saying: "I like it. Good job, Michelin."