Andrea Dovizioso made it back-to-back MotoGP victories for Ducati for the first time since 2010, beating Marc Marquez to win the Catalunya Grand Prix

From seventh on the grid, Dovizioso jumped into the lead pack and then emerged on top after a battle with Honda's Marquez and Dani Pedrosa.

Seven days after winning in the dry for the first time at Mugello, Dovizioso claimed Ducati's first win at Barcelona since Casey Stoner's 2007 victory.

Stoner was also its last winner of consecutive races, at Aragon and Motegi in 2010.

Despite making a terrible start from the middle of the front row, Jorge Lorenzo was able to pass Pedrosa for the lead at Turn 5 on the opening lap, and ran at the front for the opening stages.

But the Ducati rider never led by more than half-a-second and then fell to sixth in the space of just over one lap, a chain started by Marquez firing a move down the inside at Turn 10 on lap six.

Pedrosa followed Marquez through, before Lorenzo was passed by his team-mate Dovizioso at Turn 14, then Tech3 Yamaha's Jonas Folger and Pramac Ducati's Danilo Petrucci - who bumped into Marquez off the line - the next time around.

Lorenzo's drop left the Hondas and Dovizioso as the lead three, shadowed by Folger.

Dovizioso passed Marquez for second on lap eight, and starting the second half of the 25-lap race the lead quartet was covered by just eighth tenths. 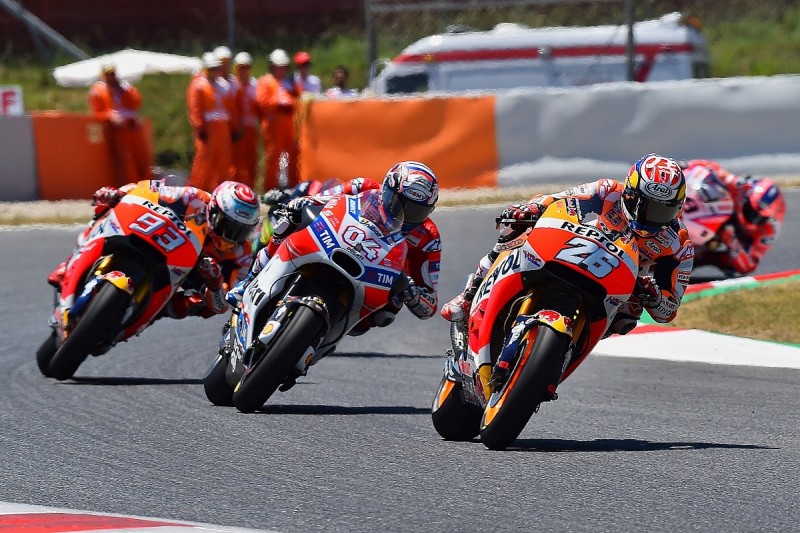 It was status quo for the next phase, until Dovizioso made his move, passing Pedrosa into Turn 1 starting lap 17, finishing it with a 0.439s buffer.

Marquez put a move on Pedrosa into Turn 4 the next time around to reclaim second, by which time Dovizioso's lead had doubled, with seven to go.

While Marquez initially looked like he might be able to mount a challenge, Dovizioso responded and led by more than one second for the first time entering the final five laps.

From there, Dovizioso charged on to take his fourth career MotoGP victory by 3.544s.

Marquez settled for second, having crashed five times across the weekend, while Pedrosa faded late but still completed the podium.

After dropping down the order in the first third of the race, Lorenzo regrouped to finish in fourth place as his hard rear tyre came into its own.

He fought off a challenge from Valentino Rossi, then emerged on top of a spirited battle with Alvaro Bautista and Johann Zarco.

With a pair of quick moves on Folger and then Petrucci, at Turns 10 and 13 with four laps remaining, he moved into fourth place, ultimately finishing 9.608s behind Dovizioso.

Petrucci crashed at Turn 5 on the penultimate lap, while Folger struggled late on heavily-worn tyres and was passed for fifth by Zarco, the pair split by just 0.083s crossing the line.

Bautista finished seventh, while Rossi was the best of the Yamahas in a distant eighth, 20.821s off top spot.

Vinales got away slowly from ninth and fell to 16th, and ultimately finished in 10th, largely aided by attrition.

He maintains the championship lead, but now only by seven points over Dovizioso, with third-placed Marquez 23 adrift.

Marc VDS Honda's Jack Miller was the only rider other than Petrucci to crash, also at Turn 5, from 10th place early in the second half of the race.