Marc Marquez topped a frenetic third practice session for the Australian Grand Prix, which sentenced a host of big MotoGP names to the first phase of qualifying in mixed conditions

The newly-crowned champion set his time of 1m33.155s in the final window of improvement early in the second half of the session, which was brought forward by an hour and extended by 15 minutes after Friday's washout at Phillip Island.

Marquez finished 0.054 seconds ahead of local hope Jack Miller, while the likes of Maverick Vinales, Valentino Rossi, Cal Crutchlow and Jorge Lorenzo - who finished last - will have to contest Q1.

Improved conditions on Saturday morning and the constant threat of more rain resulted in a mini-shootout at the start of the hour, on a largely-dry track surface.

Times quickly eclipsed the Friday benchmark set by Crutchlow in the wet, even before Marquez set a 1m33.661s on intermediate tyres seven minutes in.

That effort was 4.557s clear of the pack, and he improved again the next time around to 1m33.304s, as some of his rivals started to make inroads.

Other riders had headed to pitlane as light rain started to fall again, the likes of Yamaha's Rossi and Ducati's Andrea Dovizioso opting to match Marquez's intermediate strategy, but with Miller the first to gamble on slicks.

Honda injury fill-in Nicky Hayden slotted into second place, but was displaced by Miller who found a groove on slicks to close to within 0.729s of Marquez.

A flurry of times followed, but with riders on a medley of slicks, intermediates and even full wets, as drizzle came and went.

At the halfway stage, Marquez led Miller, Hayden, Dovizioso and Alvaro Bautista, who crashed at the first corner moments after Aprilia team-mate Stefan Bradl fell at Turn 4, amid what was then the most-meaningful of the rain. 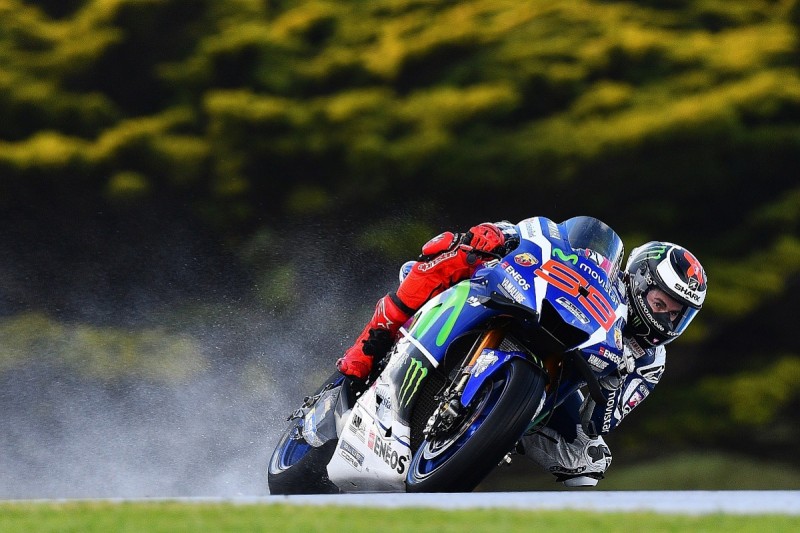 Conditions remained clear enough for another batch of improvements early in the second half.

Marquez got back ahead with a 1m33.155s, on an intermediate front and slick rear, which was ultimately good enough to finish on top.

Before rain returned with 19 minutes to go, Aleix Espargaro and brother Pol Espargaro vaulted up the order to finish third and fourth, ahead of Dovizioso.

Outside that, and set to contest the first phase of qualifying, Vinales improved to run as high as fourth, before falling back to 11th, one spot ahead of Rossi.

LCR Honda's Crutchlow tried slicks tyres in the first half of the session but ultimately wound up 15th, while Lorenzo was 21st and last, 5.163s slower than Marquez, having headed out on slicks moments the final heavy shower.