For the second year in a row, Dovizioso was taken out of the Termas de Rio Hondo race by another rider, this time being hit by Espargaro at Turn 5 on the 15th lap of 25, after Espargaro lost the front end of his Aprilia.

But the Italian says he does not blame Espargaro for the crash, as he believes the way Pramac Ducati rider Petrucci was riding to defend sixth just ahead was the main catalyst.

"When I was behind Danilo and he had finished completely the rear tyre, he was riding in a bad way," said Dovizioso.

"He stopped a lot of riders, braking in a strange way, I think too much.

"Everybody tries to use his own style, but in the way he uses it, it was very bad.

"I tried to overtake him inside and he braked later and closed the door.

"Like this it's very bad because you don't give the possibility to do something.

"You can't brake like him, he's heavier and he's able to brake harder, this not fair. It wasn't over the limit, but this is not fair.

"That created the crash. I almost hit him, and Aleix made a mistake for that manoeuvre.

"For sure the mistake was from Aleix, but everything leading up to that was Danilo." 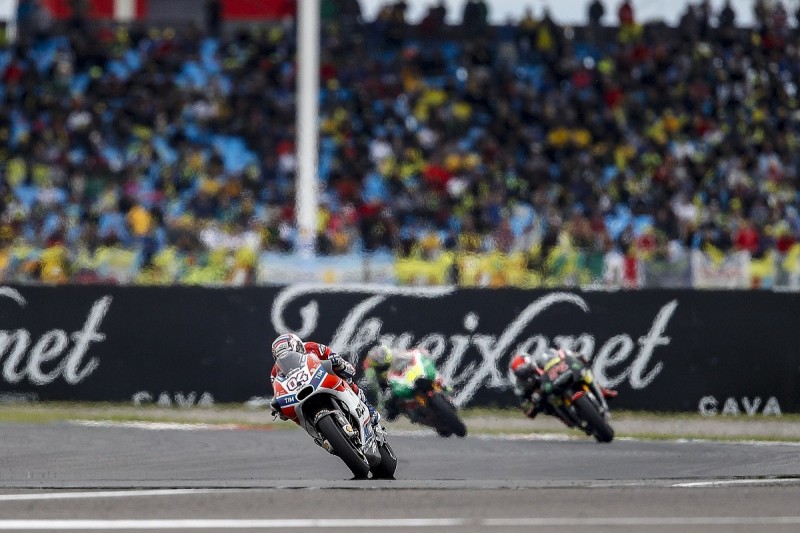 After Dovizioso came a close second to Maverick Vinales in Qatar, both factory Ducatis failed to score in Argentina, as Jorge Lorenzo crashed out at the first corner after hitting the Suzuki of Andrea Iannone.

The incidents aside, Dovizioso said he also lacked the pace he enjoyed in the season opener due to a lack of rear grip across a frustrating weekend.

"After the race we confirmed the limit was the grip on the rear," said the Italian.

"I couldn't brake as hard as I wanted or I could, because the bike was able to brake harder but the limit was the slide on the braking.

"The bike was quite good, I didn't lose too much, but on the exit I was really bad, so I struggled the whole race.

"With that speed, anyway, I was able to fight for fifth position."