MotoGP riders have complained about track conditions at Termas de Rio Hondo, saying they are having difficulty passing on parts of the Argentina circuit that are "like ice"

The Termas circuit is notorious for having low grip as it is used infrequently throughout the year, which requires riders to clean the track up throughout the race weekend.

Riders struggled off the racing line throughout the opening day of MotoGP practice on Friday, with Jack Miller crashing at the tight penultimate corner in FP2 while attempting to overtake Valentino Rossi.

Giving his assessment of conditions, Pramac Ducati rider Miller said the track was "like ice".

"I was clearly faster than Vale, three or four key overtake points before I didn't really think I could do it and I thought there [at the penultimate corner] of all places I should be able to because it's quite a safe corner to pass," said Miller.

"I was right on his ass coming out [of the previous corner] and I thought I was safe, but just when I started braking I braked maybe a metre inside and when I grabbed the brake, the actual whole bike went sideways.

"I had to release and grab again, and when I got back onto the racing line, I started running wide and got off it again, and just tried to commit to the corner.

"As soon as I went over, I started releasing the brake to try to bring the bike back in and [it] just went on me.

"It's sketchy off line. I think most of the overtaking will have to be done prior to a braking [point] so you can sort of move your way back onto the racing line." 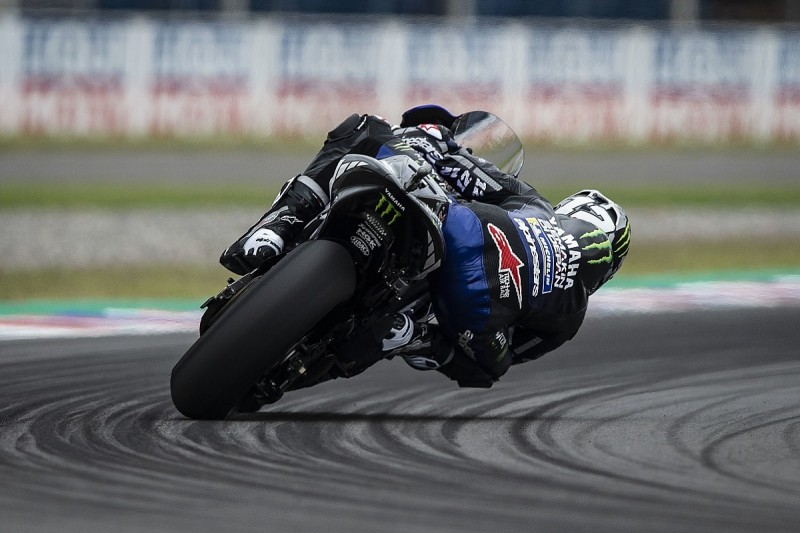 Yamaha rider Maverick Vinales said it was "impossible" to ride off line.

"I could not even touch the gas [off line], I was so critical, in a really small line there is grip, and no grip," he said.

"We saw many riders also in Moto3 go down, as soon as they lose the line a little bit. Also Jack [Miller] in last corner.

"We have to pay a lot of attention to where you are on the track."

Cal Crutchlow expected conditions to improve on Sunday after the Moto3 and Moto2 races, but the LCR Honda rider was puzzled to see wet patches on the track on Friday despite no rain falling for two days.

"I don't understand how it rained two days ago and there are still wet patches on the track," he said.

"If it rains, everyone is scuppered tomorrow [Saturday]. "It is really dusty off line but that is the problem, if somebody does pass you, you have to run off line, and the line is so narrow here for some reason.

"I think it will be better in the race because Moto2, they run a little bit different lines - [there are] 40 guys on the track going mad in the first laps, so it does clean up a little bit."

Argentina MotoGP: Marquez back on top for Honda in third practice