Championship leader Fabio Quartararo claimed his 10th MotoGP pole in qualifying for the Aragon Grand Prix, just hours after a heavy crash in FP3 left him with a hip injury

Quartararo was flicked from his Petronas SRT Yamaha in FP3 at Turn 14 and had to be taken to the medical centre for checks on his hip - but was found to have escaped broken bones.

FP4 pacesetter Franco Morbidelli set the early pace on his Petronas SRT Yamaha with a 1m48.090s, though he would be deposed by Q1 graduate Jack Miller.

The Pramac rider fired in a 1m47.657s on his Ducati, while Morbidelli's second lap put him just 0.002 seconds adrift.

Two minutes later, Quartararo showed no obvious ill-effects from his FP3 crash to take over provisional pole with a 1m47.657s and lead Morbidelli by 0.089s after the first runs.

Maverick Vinales moved the goal posts with two minutes to go on the sole works team M1 with a 1m47.125s, and improved marginally on his final lap to a 1m47.122s.

But Quartararo had enough in hand to deny his Yamaha stablemate, the Frenchman digging deep for a 1m47.076s in his last effort to claim his fourth pole of 2020.

Vinales held onto second, while LCR's Cal Crutchlow registered his first front row since last year's US GP in third.

Morbidelli found himself shuffled off the front row at the chequered flag into fourth, with Miller and Suzuki's Joan Mir completing the top six.

Takaaki Nakagami just missed out on a place on the second row in seventh on his LCR Honda, with Q1 pacesetter Danilo Petrucci eighth on the Ducati ahead of Aprilia's Aleix Espargaro. 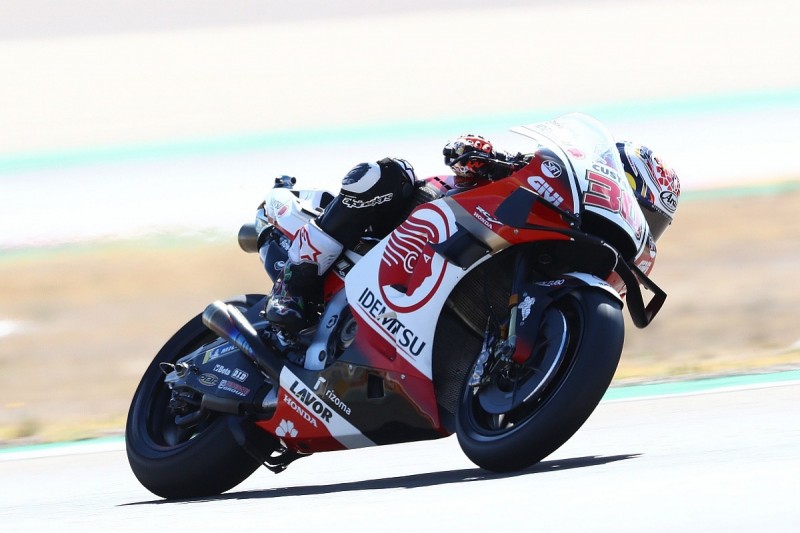 Espargaro and his KTM-mounted brother Pol made contact in the latter stages of Q2 at the last corner, with the latter ending up 12th behind Honda rookie Alex Marquez and the sister Suzuki of Alex Rins.

Andrea Dovizioso's tough Aragon GP weekend took another sour turn as he was knocked out of the Q2 progression slots by his own Ducati stablemates Petrucci and Miller.

Showing a rare outburst of anger as he returned to his garage, Dovizioso will start Sunday's race from 13th in another dent to his title hopes.

KTM's Brad Binder will start alongside in 14th ahead of KTM counterpart Iker Lecuona on the Tech3 RC16, with Johann Zarco (Avintia) leading the struggling Pramac Ducati of Francesco Bagnaia.

Miguel Oliveira was some four tenths shy of his Tech3 team-mate in 18th, with Aprilia's Bradley Smith, Tito Rabat on the sister Avintia Ducati and Honda's Stefan Bradl complete the field.