Former Suzuki man Espargaro has had a rollercoaster campaign on Aprilia's RS-GP so far, equalling the firm's best-ever MotoGP result on his team debut in Qatar with sixth.

Since then, he has taken three more top-10 finishes, but also retired from four races, leaving him down in 14th in the points midway through the campaign.

While only one of those retirements was due to a crash - when he collected Andrea Dovizioso in Argentina - he also went off during the Italian Grand Prix, having already earned a jump-start penalty, and has had nine other accidents across practice and qualifying sessions.

"The balance of the first half of the season is negative for the points, but there have been many factors such as two engines breaking down and the crashes, which have hampered us," said Espargaro.

"But at the same time we have been fast, faster than people and we ourselves expected.

"The good races will come, and I'm sure that in the second half of the championship we will enjoy ourselves.

"I am very excited to see that I am more competitive than I expected when I signed.

"Last year they had to work hard to score points, now they are much further up the field.

"We've made the mistakes of three years in these first nine races.

"The first half of the year has not been positive in terms of numbers, but we have been fast." 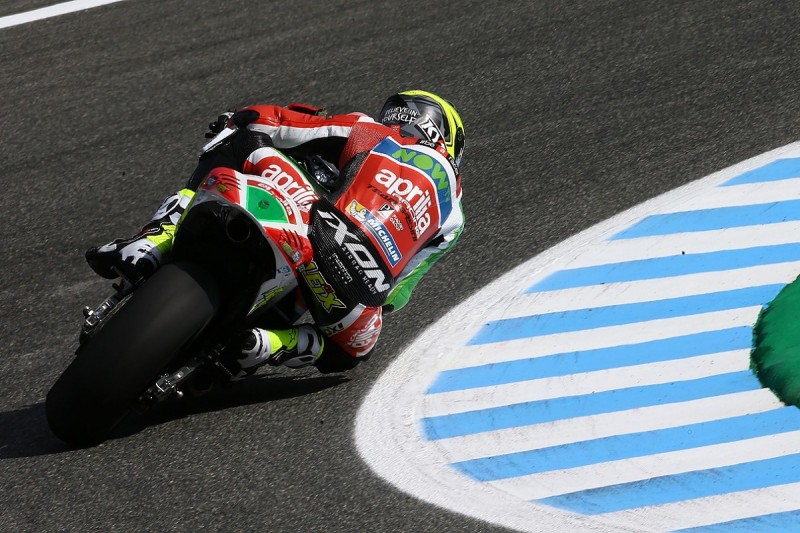 Engine failures have also held Espargaro back, causing his retirements at Jerez and Barcelona - both tracks where low-grip conditions were expected to suit the Aprilia.

He hopes it will be possible to get Aprilia on the podium in the second half of the season.

"The only thing now - I don't care about the points or the championship - I want is to finish on the podium before we arrive in Valencia," said Espargaro.

"It's going be difficult to go from 10th place [where he finished the last race at the Sachsenring] to the podium, but it's positive to be in the same group nearly the whole race as the factory Yamahas and Dovizioso."

Despite being a MotoGP regular since 2010, including two years as a works Suzuki rider, Espargaro's only premier-class podium so far is second place at a wet Aragon in '14 on a Forward Racing Yamaha.