The fight for victory at Motegi turned into a duel between Dovizioso and Marquez, with the Ducati rider needing to beat his opponent to keep his title aspirations alive.

Dovizioso led most of the race from pole position but never managed to pull away from Marquez, who made a successful move for the lead with four laps remaining.

Dovizioso then kept Marquez under pressure, but was unable to complete an overtake, before he crashed out on the penultimate lap at Turn 10.

Marquez went on to triumph, his eighth win of the season, and one which sealed his fifth title in six years in the premier class.

"I tried to win the race, but the positive thing was I wasn't over the limit when I crashed," Dovizioso said.

"I just made a small mistake because I wanted to prepare the exit in a better way compared to the lap before, because I was accelerating really good, but I couldn't exit close to Marc and tried to overtake him under braking.

"I did one lap and a half like this and I wanted to do this immediately, and I did a small mistake.

"I had a lot of [lean] angle when I prepared the corner and it was too early. I asked too much from the front tyre.

"The race was like we expected because in practice I saw really good pace from Marc.

"Also today I think he did something special, he tried to stay with me until the last seven laps, so we can just congratulate him." 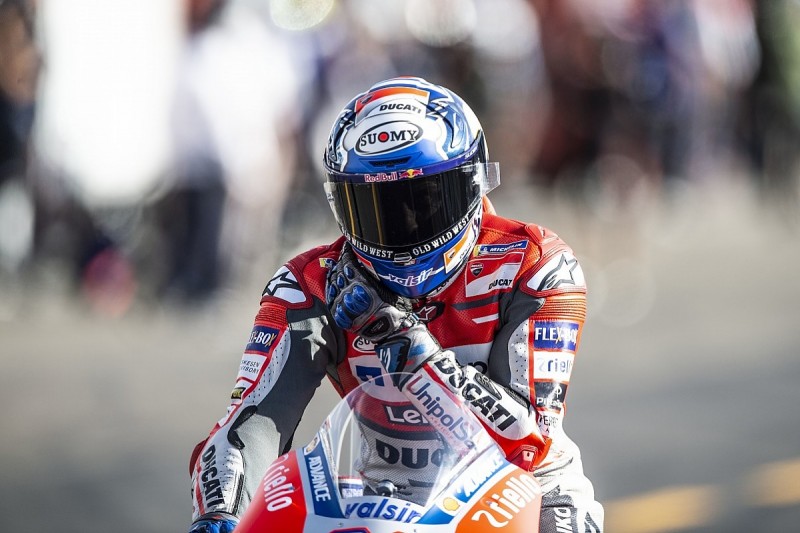 Dovizioso was quick to congratulate Marquez on taking another title, but says his and Ducati's form through the second half of the season provides optimism for 2019.

"They did another special year," said Dovizioso. "They won, this is normal because they did something better than everybody, he has more than 100 points to everybody.

"In this moment we are strong like him but at the end he won the title. We arrived from the middle to the end of the season with a very similar pace, this is very positive, to be strong like Marc.

"It is positive for next year but unfortunately today we couldn't finish in the way we wanted.

"I am so happy with the level we are now, to finish the season like this and to be really ready next year, more ready than this year."