Dovizioso qualified fourth at the Spanish circuit, but fell back during the race to eventually finish 11th, behind even the developing Aprilias, more than 30 seconds adrift of race winner Marc Marquez.

Having felt confident about his race preparation, Dovizioso said that his front tyre "didn't work like the Saturday" after four laps, while that tyre moving on the rim and a rear-tyre vibration also played a part in what he called a "disaster".

His team-mate for the weekend, Michele Pirro standing in for the injured Andrea Iannone, finished in 12th, his race also marred by a vibration.

While reluctant to theorise about the Aragon problem post-race, Dovizioso is keen to at least find out whether the problem lies at the Ducati or Michelin end, having experienced issues in several other races.

"Ducati and Michelin are in the same situation, both want to fix the problem, so we are working really hard and we will go into details to fix it," he said.

"But for sure we are really frustrated because especially when we work really hard on Saturday and we improve the situation and you have this problem in the race, it's very bad.

"It's strange. I want to keep the door open, everything is possible.

"They are working and studying the tyre, we are involved with the development of the tyre, every detail, every [piece of] data we share with Michelin to try to fix the problem.

"I think it's not the moment to say they made a mistake, [or] our bike is the problem, because it's too early." 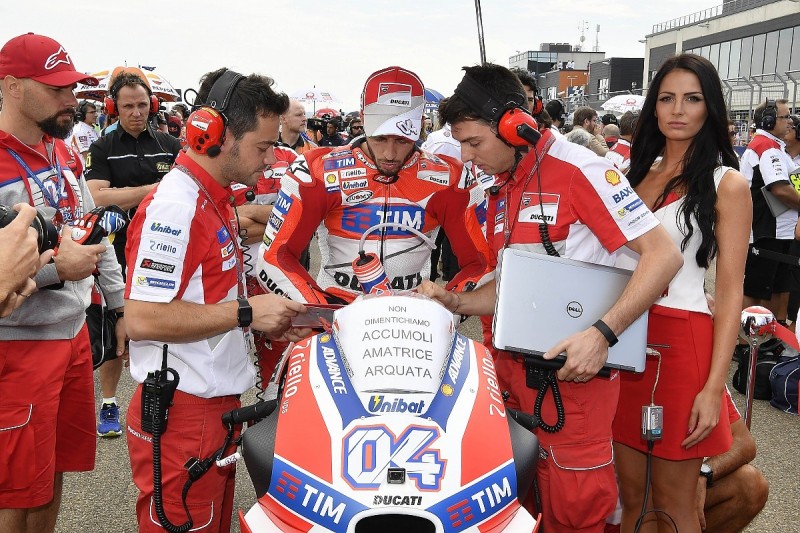 Dovizioso admits that at some races Ducati simply has not found the operating window with the Michelin tyres in the French firm's first year back, but believes the issues with consistency go beyond that.

"Sometimes the range of the Michelin is very small, so if you take a wrong decision and you are going higher or lower, it's a problem," he said.

"This happened to us, or some other riders, and this is one story.

"We have to understand the tyres, we have to manage in a better way. But [on Sunday] I didn't have that feeling, because about the temperature on the tyre was never so high.

"[On Saturday] we did a comparison to find the best tyre and Michelin was happy because the temperature was in the range.

"So maybe it's a different situation, but I don't know.

"It is something strange, because we didn't have a problem with the tyre, the pressure, we checked everything, it was all right."