Franco Morbidelli says Johann Zarco's line into Turn 3 in the MotoGP Austrian Grand Prix which led to a horror collision showed "little love" for both riders.

The Petronas SRT rider and Zarco were involved in a terrifying collision on lap nine, with Morbidelli clipping the rear of the Avintia Ducati as both headed through the Turn 2 kink.

Zarco's bike ploughed straight into the fence and vaulted the track at Turn 3, while the SRT M1 hurtled across the grass and only narrowly avoided wiping out Valentino Rossi and Maverick Vinales.

Morbidelli was taken to the medical centre for checks, but no serious injuries were found and he expects to race in the Styrian GP next week.

Commenting on the incident, Morbidelli told Sky Italy: "Zarco is a half-killer.

"Braking like this at 300km/h is really having little love for yourself and those you are racing with.

"I really hope that this huge accident makes him think a little more, because it was really dangerous for me, for him, and for Valentino and Maverick.

"I'm sorry because I couldn't do anything, because when I went to brake Johann changed trajectory and when he went out [of the racing line] I couldn't help but catch him because I was sucked in from the wake."

Zarco got away with some friction burns, and no penalty has currently been awarded for the clash. 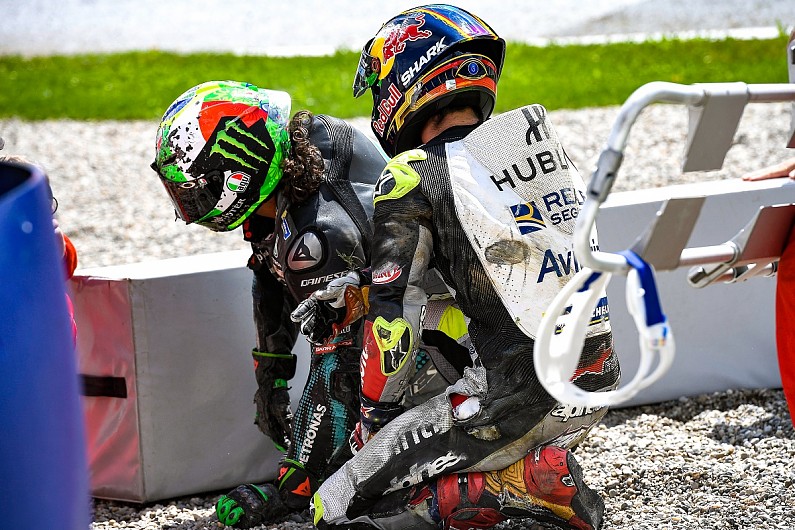 The Avintia rider insists he did not move under braking deliberately, and held 'clear the air' talks with Rossi afterwards to explain that he is "not a crazy guy".

"The bad things that they [Rossi and Morbidelli] were thinking, [that] I did it on purpose, that I wanted to stop Morbidelli..." Zarco said.

"This was not my thought. I was braking, for sure I thought that maybe he could overtake. But I didn't cut the line to stop him.

"It's too crazy to do it and dangerous, and I'm conscious enough to manage it.

"When I was braking, there were no bad thoughts.

"I saw Franco in the medical centre and we hugged each other because we were scared.

"And then I was sad because bad things came out from comments from Franco and [Valentino], so we spent 10 minutes together [with Rossi].

"I could say what happened and everything is much better now. It was a bad event during this race, fortunately nobody is really hurt.

"I just spoke to [Valentino] for 10 minutes to make him understand that I am not a crazy guy."