Ousted KTM MotoGP rider Johann Zarco says it felt like his "heart was ripped out" by the Austrian manufacturer's decision to drop him with immediate effect this week.

The six-time MotoGP podium finisher was already on his way out of KTM, after he requested to have his two-year deal with the team terminated last month following a woeful debut campaign aboard the RC16.

Enjoying his strongest weekend of the year with an eighth-place in qualifying - though was forced to start from 11th as punishment for his collision with Tech3's Miguel Oliveira at Silverstone (pictured below) - and 11th in the San Marino Grand Prix, KTM made the shock announcement it would be dropping him from its line-up in favour of test rider Mika Kallio with six races remaining.

Speaking to Canal+ for the first time since the announcement, Zarco says KTM "cut me off a little bit" with its decision and admits he was "shocked" at first.

"I found out on Tuesday," Zarco said at Aragon asked when he was made aware of KTM's decision.

"Now I'm in the paddock, I have things to get back. I'm not going to stay until the race, I'm going home early to train.

"It feels weird. 10 years of grand prix [racing] and now I was told 'no, you don't finish the season' - even though I decided during the summer not to do next year with KTM. 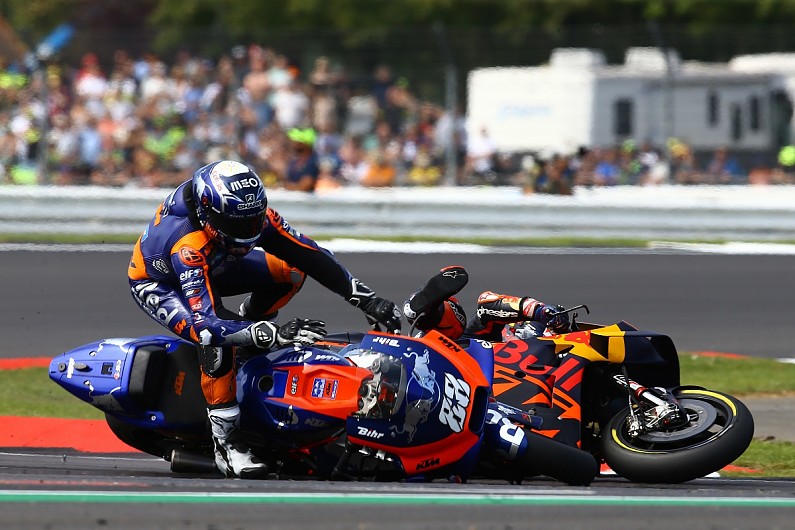 "I tried to anticipate to give myself a chance to bounce back, but they cut me off a little bit.

"Not finishing [the season] is weird, something was ripped out of my stomach a little bit, my heart was ripped out, I don't know... It's not easy to digest.

"I was a little shocked at first, and when the days go by, it's like everything else, you accept it better and move on."

Zarco's options for next year are limited, with all MotoGP seats and top Moto2 seats - where he was twice a champion in '15 and '16 - gone.

He has expressed a desire to take on a roll as a test rider in the premier class, and it is thought he is close to a return to Yamaha at its European test team in place of former Tech3 team-mate Jonas Folger.

In a press release issued on Tuesday, KTM stated "developments and on-going work mean that priorities have been aligned", suggesting this decision was taken to stop Zarco from taking any secrets with him.

When asked about his future plans, he replied: "A lot of options, maybe not, but I give the priority to MotoGP.

"I am currently in good shape to ride fast in MotoGP and I have to use that [in this] moment.

"These are career moments. I am in a MotoGP period and I want to do everything I can to be here and fight at the top.

"I'm dreaming about this, so right now I'm chasing after these dreams."