The 27-lap Moto3 race opened up Sunday’s proceedings, with poleman Izan Guevara storming to a fourth career victory in an imperious display.

The Aspar GasGas rider grabbed the holeshot at the start and quickly put half a second between himself and the chasing pack behind.

Guevara’s march continued to the point where he was a second out of reach in the early stages, with the Spaniard going on to open up a massive advantage of 5.2s come the final lap of the grand prix.

As the Leopard Honda of Dennis Foggia and Guevara’s Aspar team-mate Sergio Garcia – who came from eighth on the grid – battled over second, Guevara eased to the chequered flag to score his third win of the 2022 campaign.

Foggia made a mistake through the Turn 9 left-hander, which allowed Garcia to get a run on him into the big braking zone at Turn 12.

The Leopard rider held firm, but Garcia launched a daring raid up the inside of Foggia at the final corner.

However, Garcia ran slightly wide and then had a moment applying the throttle, killing his momentum and allowing Foggia to snatch second by 0.111 seconds.

Ayumu Sasaki was the sole Max Racing Husqvarna rider across the line in fourth after team-mate John McPhee was involved in an incident at Turn 1 on the opening lap.

Garcia’s championship lead has been hacked down from 16 points to seven by Guevara, with Foggia 51 adrift in third. 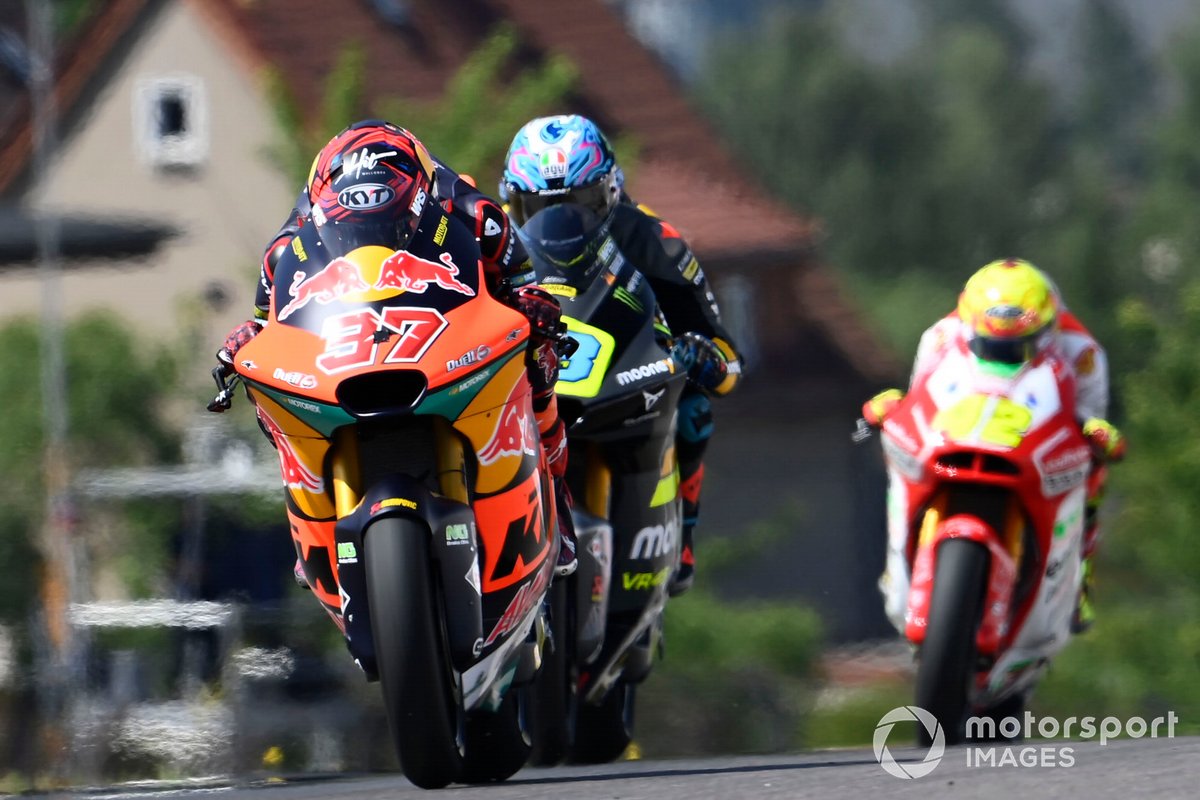 In the 28-lap Moto2 race, Augusto Fernandez dominated on his Ajo KTM to score his second win of the season as championship leader Celestino Vietti endured a nightmare race.

Marc VDS’ Sam Lowes grabbed the holeshot from pole, but Fernandez overhauled him on lap six and quickly pulled away from the chasing pack.

Over the course of the 28-lap race Fernandez moved over eight seconds clear of the field as he eased to the chequered flag to pull himself back into championship contention.

The Ajo rider is now back in the hunt courtesy of a crash with seven laps to go for VR46 rider Vietti.

The Italian was fighting outside of the top 10 for much of a difficult race, before sliding off at Turn 1.

Lowes lost second to Pedro Acosta on the sister Ajo KTM around mid-distance when he made a mistake at the Turn 3 right-hander.

But the Briton got back on terms with the Spanish rookie when he started to struggle with edge grip, with Lowes engaging over second again on lap 26.

Acosta, however, put up a stubborn defence and allowed home hero Marcel Schrotter on the Intact GP Kalex and Speed Up rookie Fermin Aldeguer to get into the battle for second.

As Fernandez eased to the win, Acosta and Lowes touched at the final corner on the last lap – but both stayed on their bikes.

Acosta got to the line in second, with Lowes 0.140s behind to take a podium on his 150th start.

Vietti now leads the championship by just eight points from Ogura, with Fernandez 12 behind in third and Canet 17 back in fourth.