Izan Guevara is the 2022 Moto3 world champion thanks to a thrilling Australian Grand Prix race win while Alonso Lopez dominated the Moto2 race at Phillip Island.

The Australian GP action kicked off with the 23-lap Moto3 race where Izan Guevara was able to seal the 2022 world championship.

Regardless of where his rivals finished a top two finish would do the job for the Gas Gas rider, however he made a shaky start to the race, dropping as far back as seventh on a frantic opening lap.

He was quickly able to work his way back through what was initially a seven-bike lead group, though, as he looked to get close enough to teammate and early race leader Sergio Garcia to put the title beyond doubt.

By Lap 9 the lead group was whittled down to five, local hero Joel Kelso dropping back as Guevara led the first time after working through Garcia, Ayumu Sasaki, Deniz Oncu and Diogo Moreira.

The latter would swiftly fall away from the lead group as well, leaving Guevara, Sasaki, Garcia and Oncu to stage a thrilling battle for the duration of the race.

The title picture continued to change as the top four jostled for position, each leading at some point as both the race and championship went down to the wire.

Ultimately it was a rapid final lap that made the difference, Guevara pulling far enough clear of the pack to win both the race and become world champion.

Oncu finished the race second ahead of Garcia and Sasaki.

Stefano Nepa finished fifth while the battle for sixth between John McPhee and Kelso came down to a dead heat and a photo finish. McPhee was ultimately classified in the position, Kelso forced to settle for a career-best seventh on home soil.

Moreira dropped back to eighth while Dennis Foggia, who came into the race second in the points, was never in the hunt as he battled his way to ninth ahead of Riccardo Rossi.

The Boscoscuro rider went into the race with a long lap penalty thanks to his Free Practice 1 clash with Celestino Vietta.

Starting from the outside of the front row, Lopez sprinted in the opening laps as he pulled more than two seconds over Fermin Aldeguer, Tony Arbolino and Augusto Fernandez.

On Lap 4 he was able to serve the long lap penalty and still resume with a lead of over a second.

At that point Aldeguer started to drop back through the field, leaving Arbolino sitting in second place. That was until a high-speed lowside into the Hayshed on Lap 7 sent him tumbling through the gravel and out of the race.

That left Red Bull KTM Ajo teammates Pedro Acosta and Fernandez battling it out for second place with no real pressure from behind.

With chief title rival Ai Ogura mired back outside the Top 10 and struggling for pace, it looked as if Fernandez would cruise to a podium finish and extend his points lead.

That was until Fernandez dropped the front of his KTM at Southern Loop on Lap 16 and slid out of the race.

That left Jake Dixon, who has started down in 14th sitting third, while Ogura went from facing a significant points deficit to Fernandez to leading the championship. 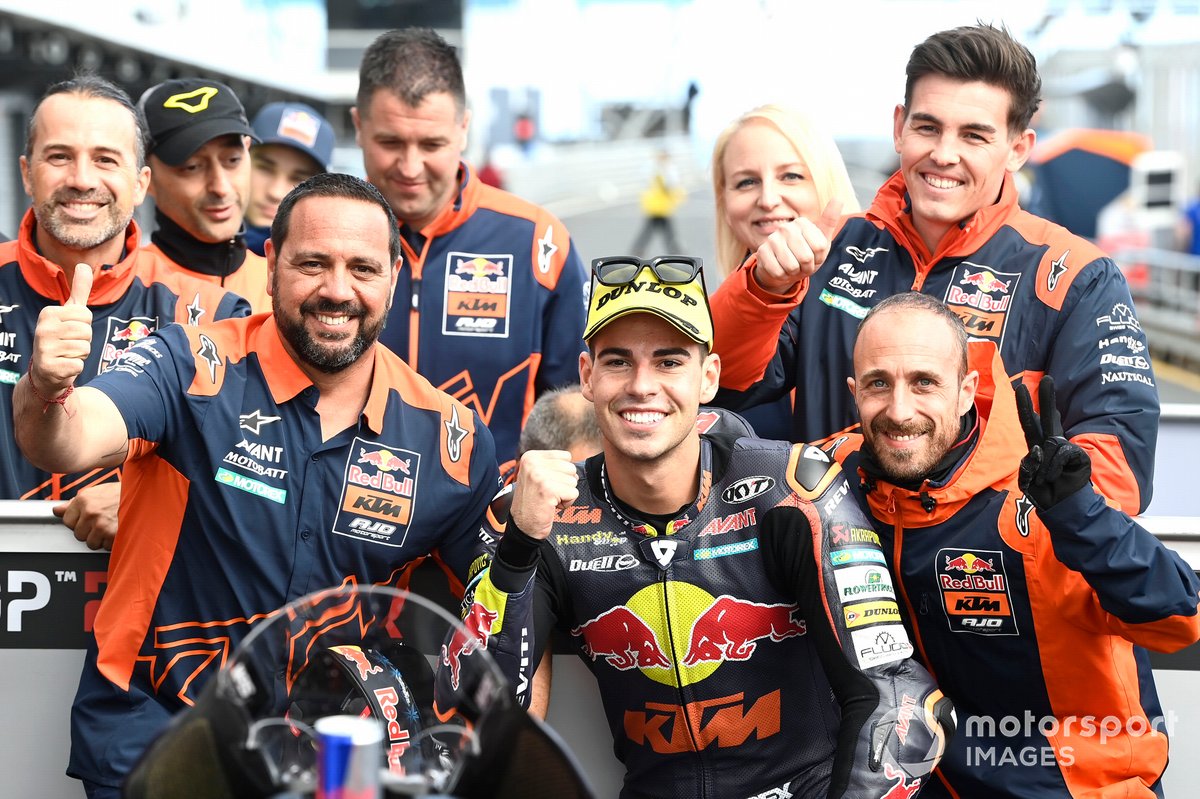 Out front there was no stopping Lopez, who managed the gap back to Acosta expertly as he ran out the remaining laps.

His final winning margin was 3.5s, while Dixon finished a lonely third a further 6s down the road.

Aldeguer fought back to finish fourth in a tight battle back with Manuel Gonzalez and Jeremy Alcoba. Cameron Beaubier was ahead of that group for much of the race, but dropped back to seventh by the finish.

Ogura fought his way to 11th, which means he takes a 3.5-point series lead over Fernandez into the final two rounds of the season.