The Thai rider was absent from the season-opener in Qatar due to injury, but shot from fourth on the grid to dominate a Moto2 race that had its lap count cut from 25 to 16 due to safety concerns over track conditions in the extreme Indonesian heat.

At lights out, poleman Dixon got the best launch on his Aspar Kalex, though was mugged into Turn 1 by a fast-starting Chantra.

Marc VDS rider Sam Lowes demoted his fellow Briton Dixon down to third, while Chantra immediately opened up a lead of half a second.

Despite sport of rain falling on circuit as dark clouds above the track threatened a heavy downpour, Chantra was never thrown off his stride.

While the racing behind him proved frenetic, Chantra continued to ease away from the chasing pack, his gap up to eight tenths by the third lap.

Lowes continued to chase Chantra, but would soon be overtaken by Diixon as the Aspar rider looked to stop the Honda Team Asia runner out in front from clearing off. 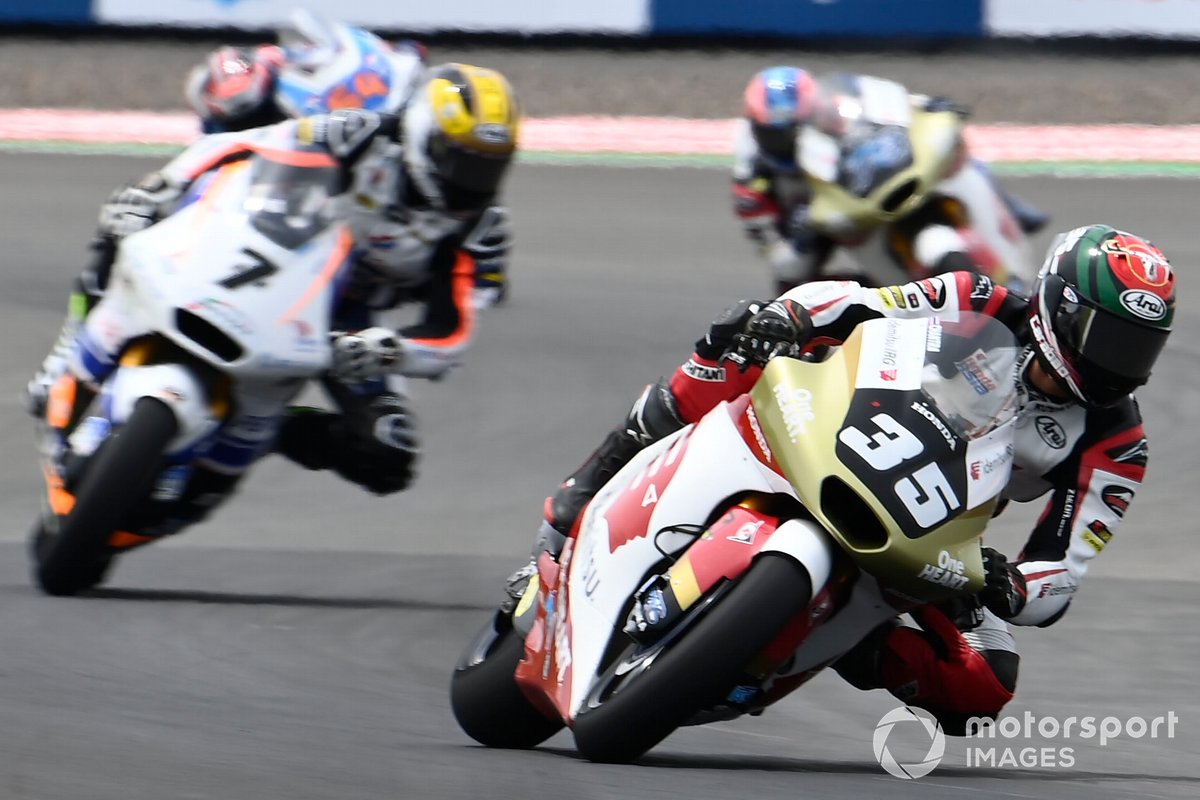 But just as he’d taken second, Dixon’s hopes came to a cruel halt as he crashed at Turn 10.

Lowes was released back into second, but Chantra was now 1.5s clear of the field and kept swelling that gap.

Coming under no pressure through to the chequered flag, Chantra took a first win for himself and for a Thai rider in any class of grand prix racing by 3.2s.

Lowes found himself shuffled out of second as the likes of VR46 rider Celestino Vietti and Pons Racing’s Aron Canet charged up the order.

Qatar winner Vietti would eventually find his way into second to extend his championship lead to nine points over Canet, who completed the podium at Mandalika.

Lowes had to settle for fourth, 3.5s behind Canet, while Ajo KTM’s Augusto Fernandez slid from second on the grid to fifth in the race ahead of the sister Honda Team Asia bike of Ai Ogura.

Impressive Speed-up rookie Fermin Aldeguer was just 0.312s from a top six in seventh, with Tony Arbolino eighth on the second of the Marc VDS bikes.

Reigning Moto3 world champion Pedro Acosta had to serve a long lap penalty for crashing under yellow flags in practice.

The Ajo rider dropped to 15th when he served his punishment on lap four, but recovered to ninth for his first top 10 result in the Moto2 class.

Acosta got the better of Albert Arenas on the sole-remaining Aspar bike at the chequered flag.