KTM has cast doubt on hotshot Moto2 rookie Raul Fernandez stepping up to MotoGP in 2022 as the Spaniard “said he wanted to stay one more year in Moto2”.

Fernandez stepped up from Moto3 to Moto2 in 2021 with KTM Ajo Motorsport and has won two races already this season, putting him firmly in championship contention.

Team-mate Remy Gardner – who leads the Moto2 standings – will step up to MotoGP in 2021 with Tech3 KTM, while Fernandez has been rumoured to join him.

However, speaking exclusively to Autosport, KTM motorsport boss Pit Bierer says Fernandez has expressed a desire to remain in Moto2 one more year.

“At the moment there is not even that much movement because the last time I spoke to Raul, a couple of weeks ago, he actually said he wanted to stay one more year in Moto2,” Beirer said. 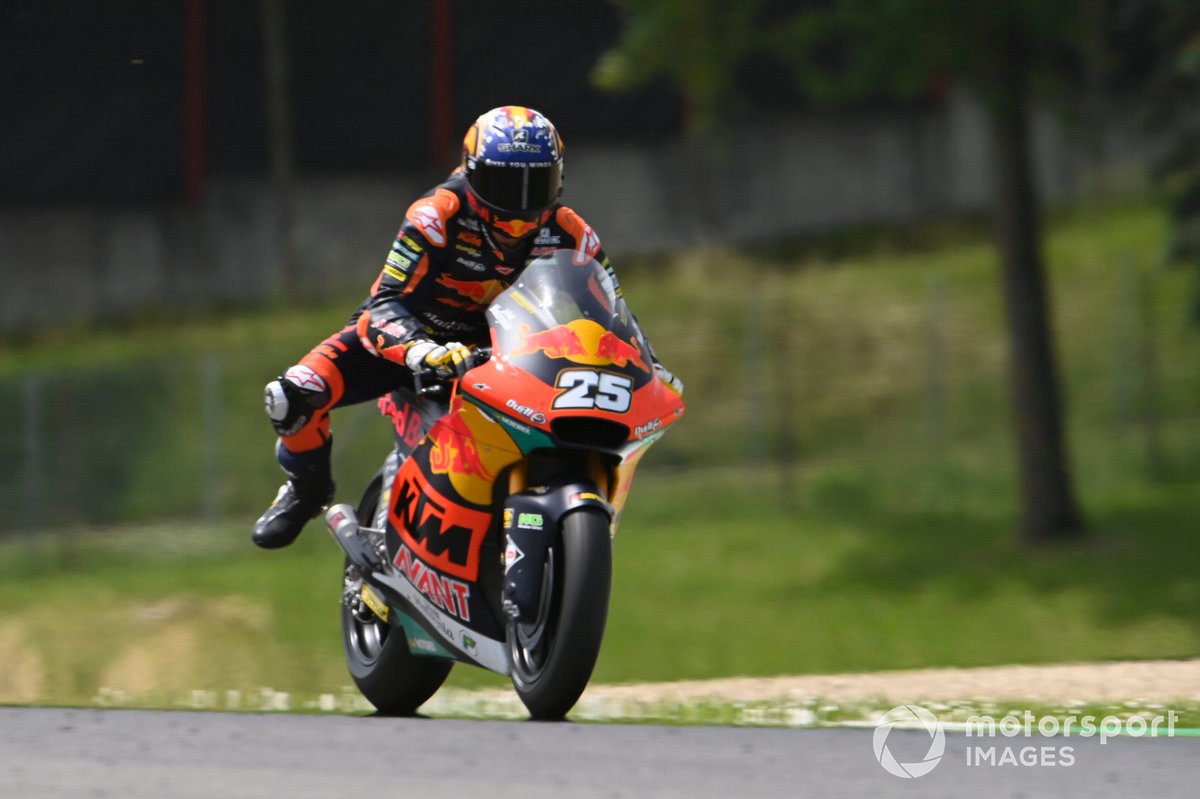 “This gives us now also the time to stay a little bit calm because we decided for Remy because we believe in him and since we told he’s stepping up he’s been even stronger and that’s so nice to see, that this gave him a little confidence boost.

“But also we have two really good guys there in Tech3 with Iker [Lecuona] and Danilo [Petrucci].

“We like both of them and we think still that the job is not done, so we need to get now Miguel and Brad better, but there is now also a big target on our side to get Iker and Danilo better.

“So at least there is a chance for all of them to stay in the team and just keep Raul in Moto2, also Pedro Acosta still maybe in Moto3.

“So, we want to take our time to take this decision, so you will not get any confirmations or news from KTM in the next couple of weeks.”

Fernandez has also been linked to a Yamaha move with Petronas SRT in place of Valentino Rossi, though it's thought Yamaha would have to pay to extract the Spaniard from his current KTM contract.

Gardner’s promotion to MotoGP has led to another star KTM rookie in 17-year-old Pedro Acosta being linked to a step to Moto2.

However, Beirer believes Acosta shouldn’t be rushed through the categories.

“You don’t need to jump quickly through the classes because if you look to other great guys in this paddock, they all had a minimum of two years in Moto3, two years in Moto2 and then jumped onto a MotoGP bike and they still had a long career because you have seen a lot of MotoGP riders even older than 30 – 31, 33, still can be good MotoGP years.

“So that’s why we say stay calm, let the guys develop and understand more.

“We could see exactly when people were saying Pedro must move up to Moto2, he got two or three difficult races.

“It’s normal, he will learn so quick. But in the end we also want to listen to the rider

“We don’t want to push through the classes, we want to feel with them and their parents what they think.

“The basis for this conversation would be from his [Acosta’s] side.

“If he says, ‘I absolutely want to move to Moto2’, we would maybe listen and make it happen.

“If he wants another year in Moto3, we’ll also listen.

“But also these young guys develop so quick during a season we want to give ourselves time to make these decisions, not in April and May when people are asking for it because a 16-year-old boy can still develop a lot from May to November.”