Ajo KTM rider Fernandez trailed team-mate Gardner by nine points coming into Sunday’s Misano race, and was on course to take the championship lead when he crashed out of the lead on lap 15.

Poleman Lowes took the lead at the start from Aspar’s Aron Canet and Speed Up’s Jorge Navarro, while Fernandez was seventh and Gardner 12th.

Canet took the lead for the first time into the Quercia hairpin, while Navarro would demote the Marc VDS rider come the third tour.

Fernandez had worked his way to fourth by the second lap and on lap four moved into the podium places in third ahead of Navarro, as Lowes returned to the lead.

As Lowes stretched his lead to over seven tenths, Fernandez’s charge continued on Canet into Quercia to move into second and begin his assault on the lead.

A lap later the championship picture took a twist as Gardner collided with Honda Team Asia’s Somkiat Chantra into the Caro hairpin at Turn 14. 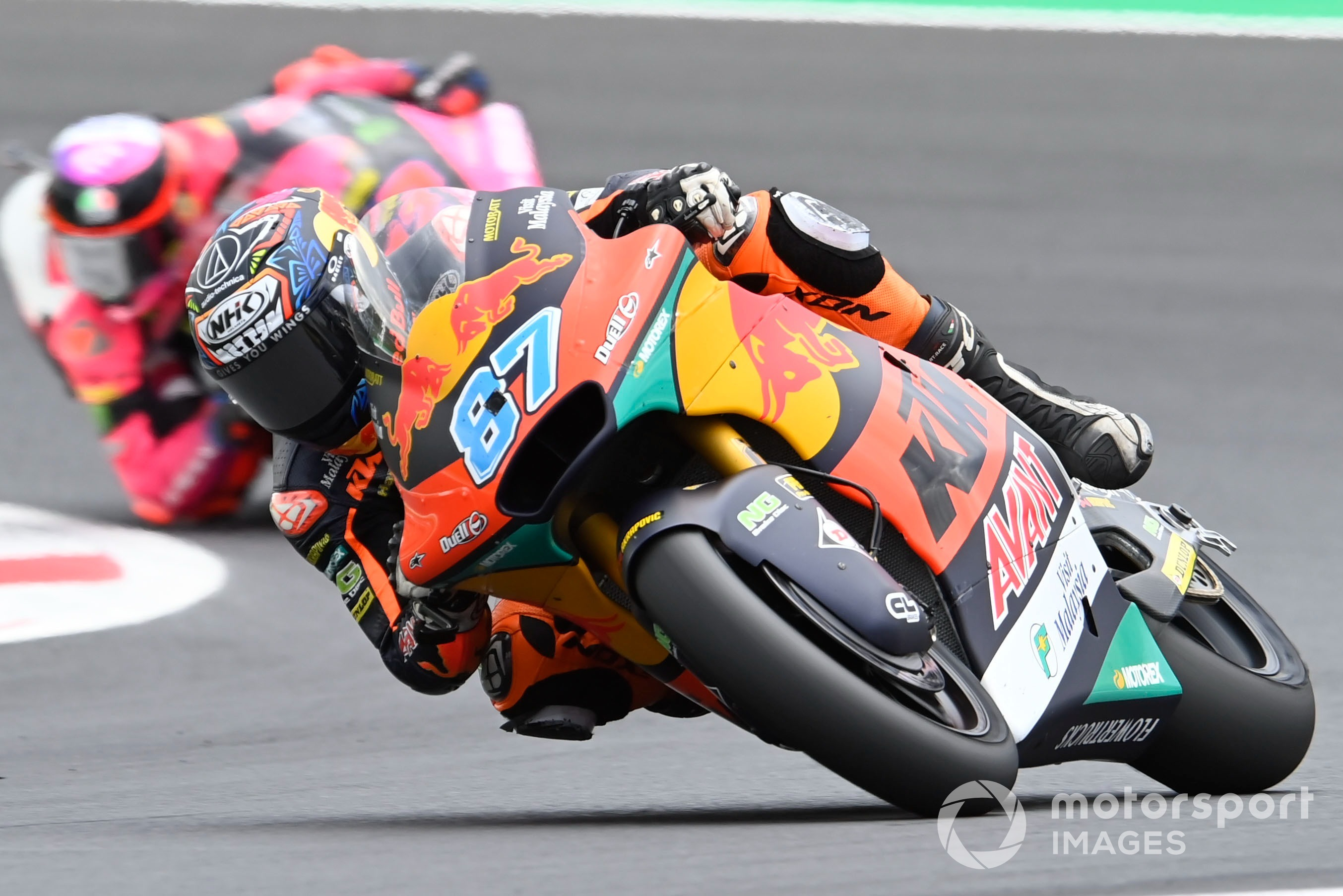 Gardner was eventually hit with a long-lap penalty by Race Direction on lap 15, while Fernandez capitalised on a mistake for Lowes on the previous tour to take the lead.

But just moments after Gardner was first notified of his penalty, Fernandez sensationally locked the front of his Ajo bike and suffered a fast crash into Quercia while leading.

Fernandez walked away unscathed, while Gardner lost no positions in seventh when he took his penalty.

At the front, Lowes ran wide on lap 18 at Quercia and allowed Canet into the lead, but carved past into Turn 2 a few laps later – the Briton having a big moment as he changed direction up the inside of the Aspar rider.

Lowes subsequently broke free of Canet to claim his first win of the season since April’s Doha GP.

Canet fell into the clutches of a late-charge from the sister Marc VDS Kalex of Augusto Fernandez, who had to serve a long lap penalty at the start of the race for blocking Canet in qualifying on Saturday.

Augusto Fernandez snatched second from Canet out of the final corner as the Aspar rider’s fuel-starved bike began to cut out to complete a Marc VDS 1-2 for the first time since 2017.

Canet held onto third from VR46 rider Celestino Vietti and Navarro, while Stefano Manzi got his Pons Kalex to the chequered flag in sixth.

Gardner came home seventh after a late crash for the sister VR46 bike of Marc Bezzecchi, with the Australian now 18 points clear of team-mate Fernandez in the championship.