An injured Raul Fernandez dominated the Moto2 Aragon Grand Prix for the fifth win of the Ajo KTM rookie’s season after a late crash for poleman Sam Lowes.

MotoGP-bound Fernandez broke a bone in his hand last Friday in a training incident and underwent surgery to correct it, but showed no signs of it holding him back at Aragon as he qualified third and eased to victory.

Poleman Lowes got his Marc VDS Kalex into the lead at the start of the 21-lap contest, with Ajo team-mate’s Remy Gardner and Fernandez following suit in grid order.

Fernandez quickly dispatched of Gardner into the Turn 12 left-hander, which allowed Lowes to open up a lead of over six tenths of a second.

Over the next few laps Fernandez was able to eat into Lowes’ advantage at the head of the pack, while Gardner didn’t have the pace to keep his hooks in his team-mate.

By lap five Gardner had dropped 1.6 seconds off the lead duo, while Fernandez had moved ahead of Lowes a tour earlier to take a lead he wouldn’t relinquish.

Fernandez’s gap quickly opened to a second by lap seven and would steadily grow by a few more tenths before Lowes’ race came to an end on the 13th tour when he crashed at Turn 7.

Now over six seconds clear of Gardner behind following Lowes’ crash, Fernandez would continue to extend his lead to over eight seconds as he cruised to the chequered flag.

Gardner came under some pressure in the final two laps from the chasing Augusto Fernandez on the Marc VDS Kalex and Speed Up’s Jorge Navarro.

A 1-2 for Raul Fernandez and Gardner has secured the teams’ title for Ajo Motorsport. 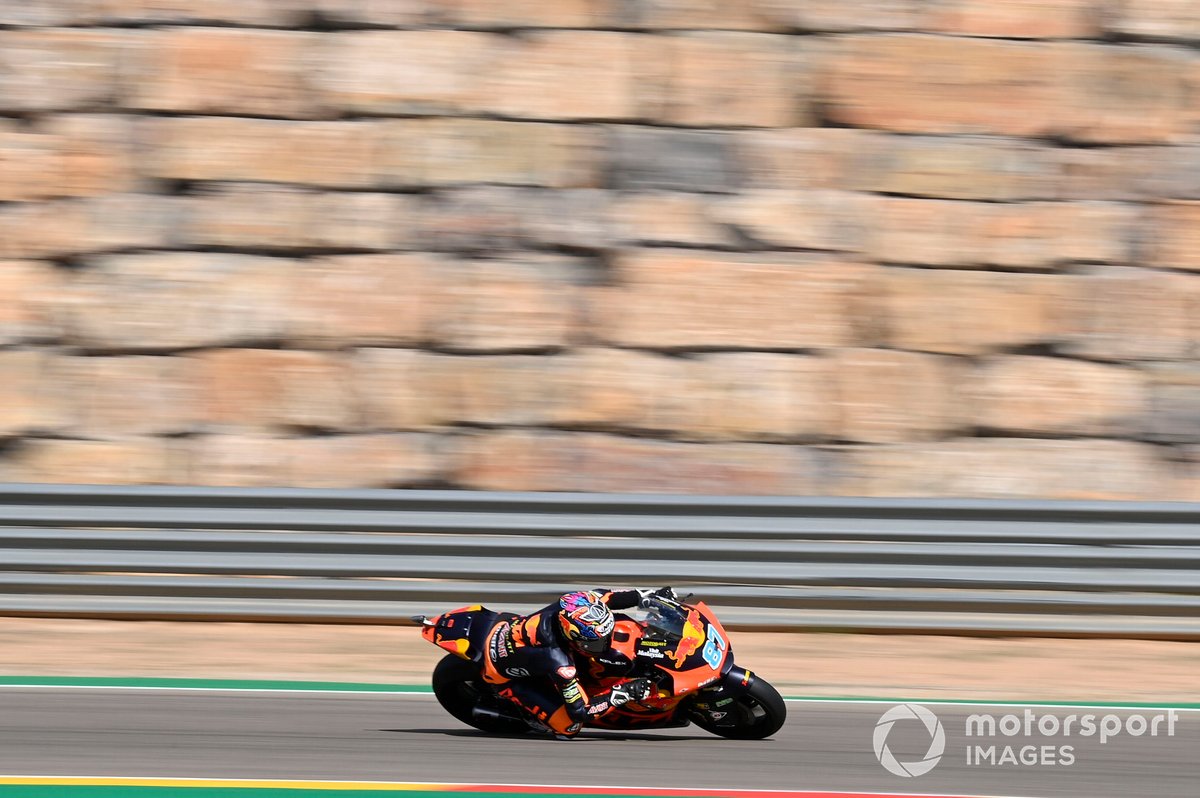 But the Australian was able to hold onto second through to the chequered flag to minimise his championship standings loss to just five points – his lead still a healthy 39 points going to Misano.

Augusto Fernandez was able to wipe a few more tenths out of Gardner’s advantage ahead of him, but the Marc VDS rider could do nothing to breach third ahead of Navarro.

Aspar’s Aron Canet had a lonely ride to fifth, with the Gresini Kalex of Fabio Di Giannantonio sixth ahead of an impressive Fermin Aldeguer on the other Speed Up bike on just the 16-year-old’s fourth Moto2 start.

Aldeguer beat Honda Team Asia’s Ai Ogura in the latter stages, with Intact GP duo Tony Arbolino and Marcel Schrotter rounding out the top 10 – though a post-race time penalty would demote the latter to 11th behind MV Agusta’s Simone Corsi.

A crash for VR46 rider Marco Bezzecchi on lap 10 has all but demolished his 2021 title hopes, the Italian now 72 points adrift of championship leader Gardner.

John McPhee was 20th and 47.756s off the victory on his Moto2 debut on the Petronas Sprinta bike, taking Jake Dixon’s place as his fellow Brit contests this weekend’s MotoGP race for Petronas SRT.