Toyota secured its fifth consecutive victory in the Le Mans 24 Hours as the #8 crew of Sebastien Buemi, Brendon Hartley and Ryo Hirakawa came out on top.

The Japanese manufacturer was never seriously threatened by its two Hypercar rivals, Glickenhaus and Alpine, in a relatively clean race for both of the two GR010 HYBRID crews.

The only major drama to hit either Toyota came just shy of the 16-hour mark, when Jose Maria Lopez stopped on track in the #7 car and had to perform a full power cycle of the front hybrid system to get going again, losing a lap in the process.

Although the car shared by Lopez, Mike Conway and Kamui Kobayashi was able to get back on to the lead lap, on pace there was virtually nothing to choose between the two Toyota crews, which had spent the first two thirds of the race exchanging the lead.

The only blip on the way to victory for the #8 car was a slightly slow changeover from Buemi to Hartley in the penultimate hour, with Hartley going on to secure victory by a final margin of 2m01.222s over Lopez in the #7 machine.

It marks a fourth Le Mans win for Swiss driver Buemi, a third for New Zealander Hartley - both of whom are now the most successful drivers at La Sarthe from their respective nations in terms of wins - and a first for Hirakawa, who becomes the fifth driver from Japan to win the event.

Best of the rest in the five-car Hypercar division was the #709 Glickenhaus 007 LMH of Ryan Briscoe, Richard Westbrook and Franck Mailleux, which ended up five laps down, enjoying a largely clean run barring an early trip to the garage to replace a sensor.

The quicker of the American manufacturer’s cars early in the race, the #708 car of Olivier Pla, Pipo Derani and Romain Dumas, had already dropped off the lead lap when Pla spun at Tertre Rouge in the eighth hour and damaged his suspension. The trio finally recovered to fourth overall, 10 laps off the winning Toyota. 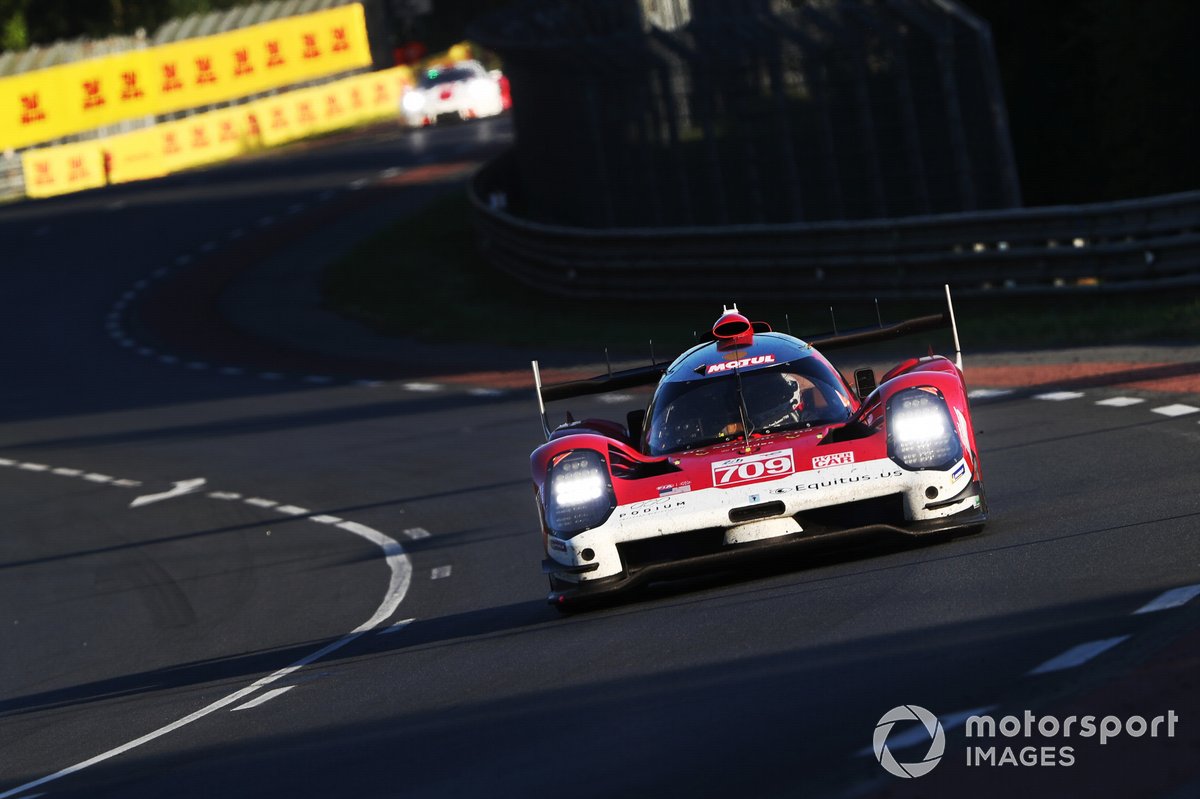 The best of the Glickenhaus runners, the #709 of Briscoe, Westbrook and Mailleux finished five laps adrift in third

Alpine’s solo grandfathered A480 LMP1 car had a disastrous race beset by technical gremlins that resulted in the entry shared by Nicolas Lapierre, Matthieu Vaxiviere and Andre Negrao finishing outside of the overall top 20, 18 laps down.

Two trips to the garage - first to replace the electronic clutch unit and then the ignition coil - were followed by a penalty for speeding and then another 20-minute spell in the pits after an off for Vaxiviere at the Porsche Curves in the morning hours.

Jota took a commanding victory in the LMP2 class that had appeared to be the likely outcome since the early stages of the race.

The #38 ORECA-Gibson 07 shared by Antonio Felix da Costa, Roberto Gonzalez and Will Stevens took the lead after the first round of stops and was barely headed after that, at one point building up an advantage of a lap over the opposition.

A crash for the #31 WRT entry of Robin Frijns in the early morning, which caused the one and only safety car period of the race, meant the #38 was delayed at the end of the pitlane by a red light, but that was just about the only misfortune that befell the team.

In the end, Stevens brought it home for Jota's first class win since 2017 by a margin of 2m21s ahead of the #9 Prema ORECA of Robert Kubica, Louis Deletraz and Lorenzo Colombo, which likewise enjoyed a largely smooth run.

Jota made it two cars on the podium as its second entry, the #28 of Ed Jones, Jonathan Aberdein and Oliver Rasmussen was a lap down in third ahead of the TDS Racing car of last-minute replacement Nyck de Vries, Mathias Beche and Tijmen van der Helm.

Team Penske logged a top-five finish in its final LMP2 outing for the foreseeable future with Felipe Nasr, Dane Cameron and Emmanuel Collard, despite losing time early on with an apparent brake duct issue that required a nose change.

Besides Jota, the other two multi-car powerhouse teams in LMP2 both had races to forget.

United Autosports lost a car from contention at Turn 1 as Will Owen’s #22 machine was hit by the pole-winning WRT car of Rene Rast, ending up in the gravel, while the #23 was also in the pits early on for a delaminated front-right tyre, dropping it down the order.

Delayed by a penalty for an unsafe release and another drive-through for a slow zone infringement, the #23 of Alex Lynn, Oliver Jarvis and youngest-ever Le Mans starter Josh Pierson could only recover to sixth at the finish, two laps down. 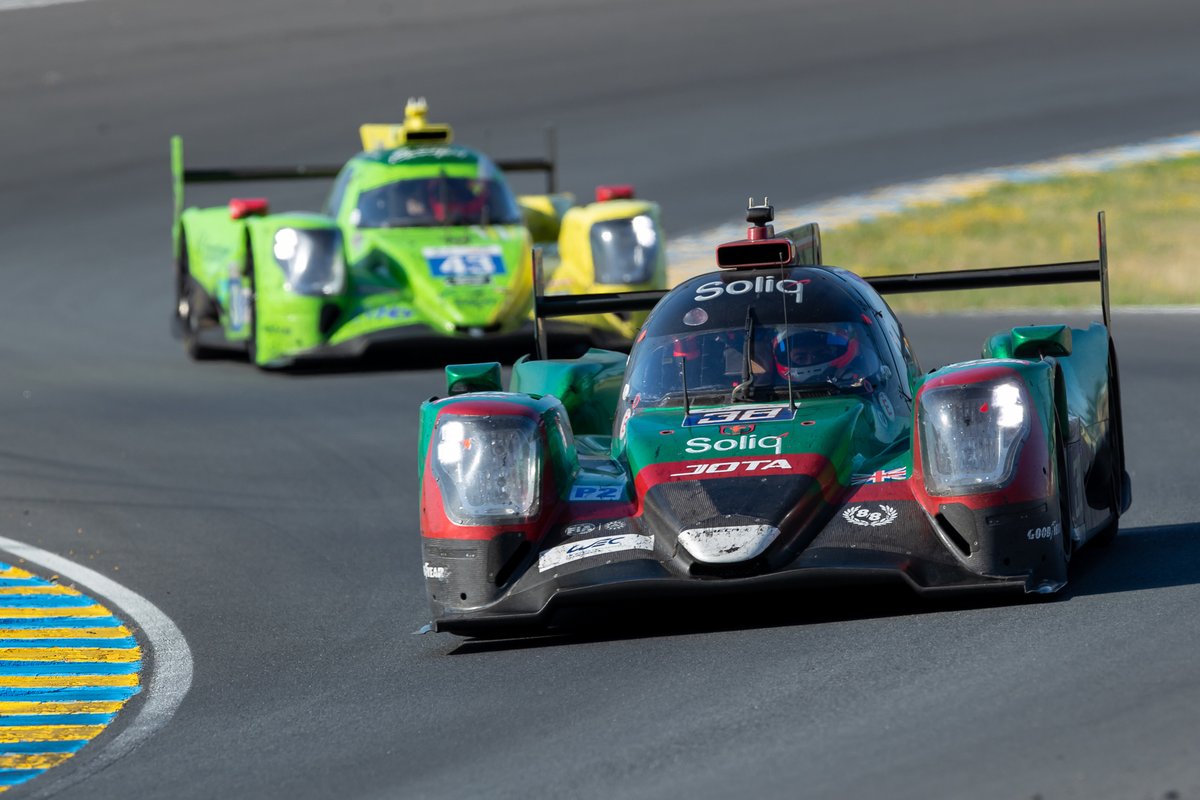 The #38 Jota crew controlled LMP2 from early on as Gonzalez, Da Costa and Stevens took victory

Owen, Filipe Albuquerque and Phil Hanson wound up 11th as they struggled with floor and sidepod damage from their first corner off, for which Rast was penalised, and later stopped on track while completing a power cycle.

With Frijns crashing out the lead WRT entry and the #41 Realteam by WRT car damaged in the first-corner incident involving Rast and Owen, it was the third-string #42 car of Dries Vanthoor, Mirko Bortolotti and Rolf Ineichen that was the Belgian squad’s highest finisher in a lowly 10th place.

With the TDS car no longer eligible for Pro/Am honours after de Vries replaced Philippe Cimadomo, who was barred from participating after several incidents in practice, it was the #45 Algarve Pro Racing entry shared by Rene Binder, Steven Thomas and James Allen that won the subclass.

The battle for the last-ever GTE Pro win at Le Mans went the way of Porsche's #91 car driven by Gianmaria Bruni, Richard Lietz and Frederic Makowiecki, as pre-race favourites Corvette Racing suffered a double retirement with its pair of C8.Rs.

Corvette had swept the front row of the class and its cars looked to be the class of the seven-car Pro field on sheer pace, with Porsche its nearest challenger and Ferrari struggling to hang on to the coat-tails of its two rivals.

However, at around one-third distance, Corvette lost a car from contention when the #63 machine of Antonio Garcia, Jordan Taylor and Nicky Catsburg suffered a dramatic left-rear suspension failure, which foreshadowed the car’s eventual retirement.

That put Porsche’s #92 crew of Kevin Estre, Michael Christensen and Laurens Vanthoor in line to replicate their 2018 GTE Pro victory, until the car was struck by a front-right puncture in the morning hours that destroyed the front end of the works 911 RSR-19.

Corvette reassumed the advantage at this point with the surviving #64 C8.R of Nick Tandy, Tommy Milner and Alexander Sims. But the race was turned on its head again when Sims, who was fighting for the class lead with James Calado's #51 Ferrari 488 GTE Evo, was put into the barriers along the Mulsanne Straight by the AF Corse LMP2 car of Francois Perrodo with six hours to run. 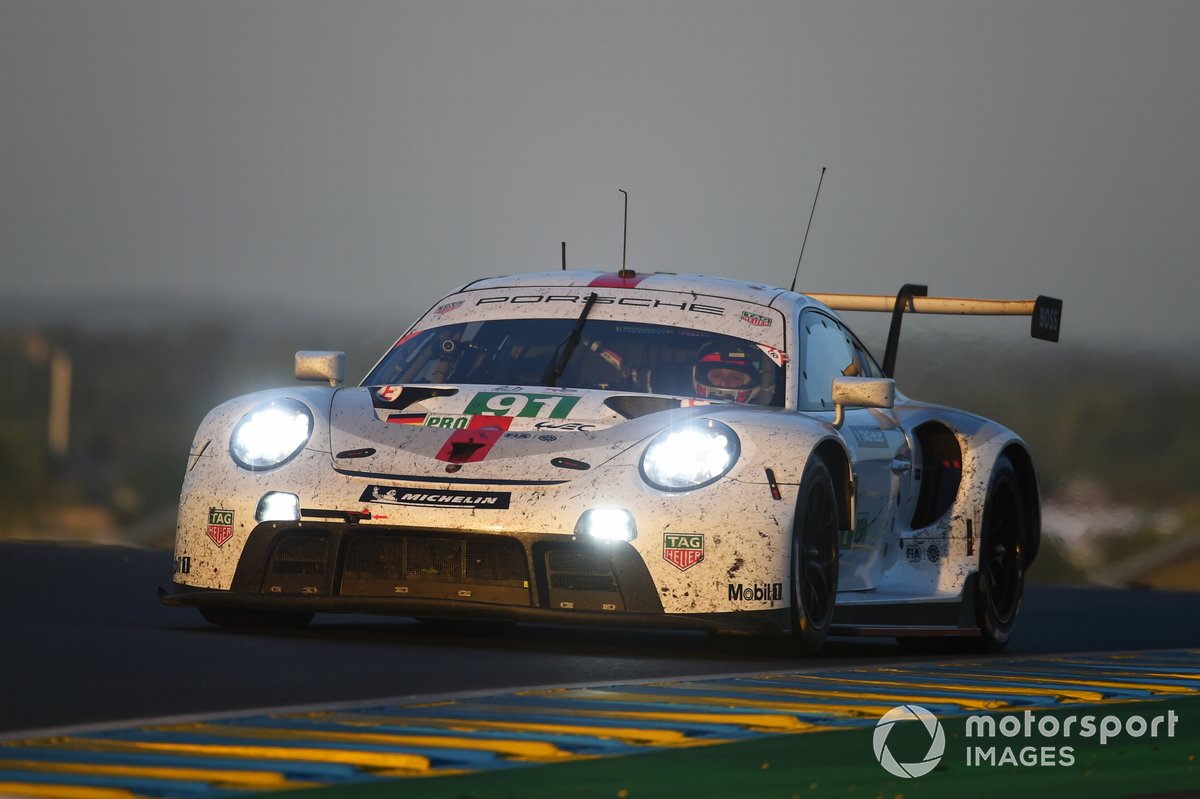 The #91 Porsche of Bruni, Lietz and Makowiecki profited from Corvette woes and the puncture for Pier Guidi's #51 Ferrari to win

With both Corvettes now out, the race became a duel between Porsche’s #91 car and the leading AF Corse-runFerrari 488 GTE Evo that Calado shared with Alessandro Pier Guidi and Daniel Serra.

The Ferrari was barely clinging to a slender advantage when Pier Guidi had to stop early due to a right-rear puncture, and from there it was plain sailing for the #91 Porsche crew, which picked up its first WEC win since the 2019 Silverstone race by 42.6s.

Ferrari’s #52 entry of Miguel Molina, Davide Rigon and Antonio Fuoco completed the podium in third, ahead of the delayed #92 Porsche and the #74 Riley Motorsports Ferrari.

Aston Martin took honours in the GTE Am division, as TF Sport’s Ben Keating avenged his 2019 disqualification with victory in the Vantage he shared with Marco Sorensen and Henrique Chaves.

WeatherTech Racing Porsche trio Julien Andlauer, Cooper MacNeil and impressive bronze-rated Thomas Merrill looked strong in the early stages, but mistakes by both MacNeil and Merrill in the night-time hours handed the initiative back to the ultra-consistent TF car, which ultimately finished 44.4s ahead.

Making it two Aston crews on the podium was the NorthWest AMR of Nicki Thiim, Paul Dalla Lana and David Pittard, a lap behind the leading duo.

The Dempsey-Proton Porsche of Harry Tincknell, Sebastian Priaulx and Christian Ried had looked on course for the final podium place until a broken wishbone inside the final three hours dropped the #77 down the order.