Alpine is targeting 12 laps between refuelling stops in an attempt to unlock its hopes of victory in this weekend's Le Mans 24 Hours.

The boss of the Signatech squad running the Alpine-Gibson A480 grandfathered LMP1 car, Philippe Sinault, explained that the team is doing everything possible to reach the same number of laps that rivals Toyota and Glickenhaus will be able to achieve with their Le Mans Hypercars.

"Twelve laps is the key, because this is the model for the LMH cars," Sinault told Autosport.

"We are working on it: we have made a big analysis on Sunday [at the Le Mans test day] and after practice we will have a better view."

Sinault explained that hitting 12 laps will be imperative for the car driven by Nicolas Lapierre, Matthieu Vaxiviere and Andre Negrao because "Toyota and Glickenhaus will have a small advantage in terms of performance" in the double-points round of the World Endurance Championship.

That, he said, was a "natural" state of affairs under the Balance of Performance in place in the WEC this year.

Sinault's comments follow Alpine's failure to match the distance between stops of the Toyota GR010 HYBRID and the Glickenhaus-Pipo 007 LMH in the opening three rounds of this year's WEC.

The ORECA design also never went more 11 laps at Le Mans when running in different specification as the Rebellion R-13 over the previous three editions of the 24 Hours.

Cars competing in the WEC are given a per-stint energy allocation measured in megajoules, but the A480 was not able to take on the full amount of fuel afforded to it under the BoP because the car was developed out of ORECA's 07 LMP2, which limited it to 75 litres' fuel capacity.

That compares with the 90-litre capacity of the Toyota published on the launch of the car. 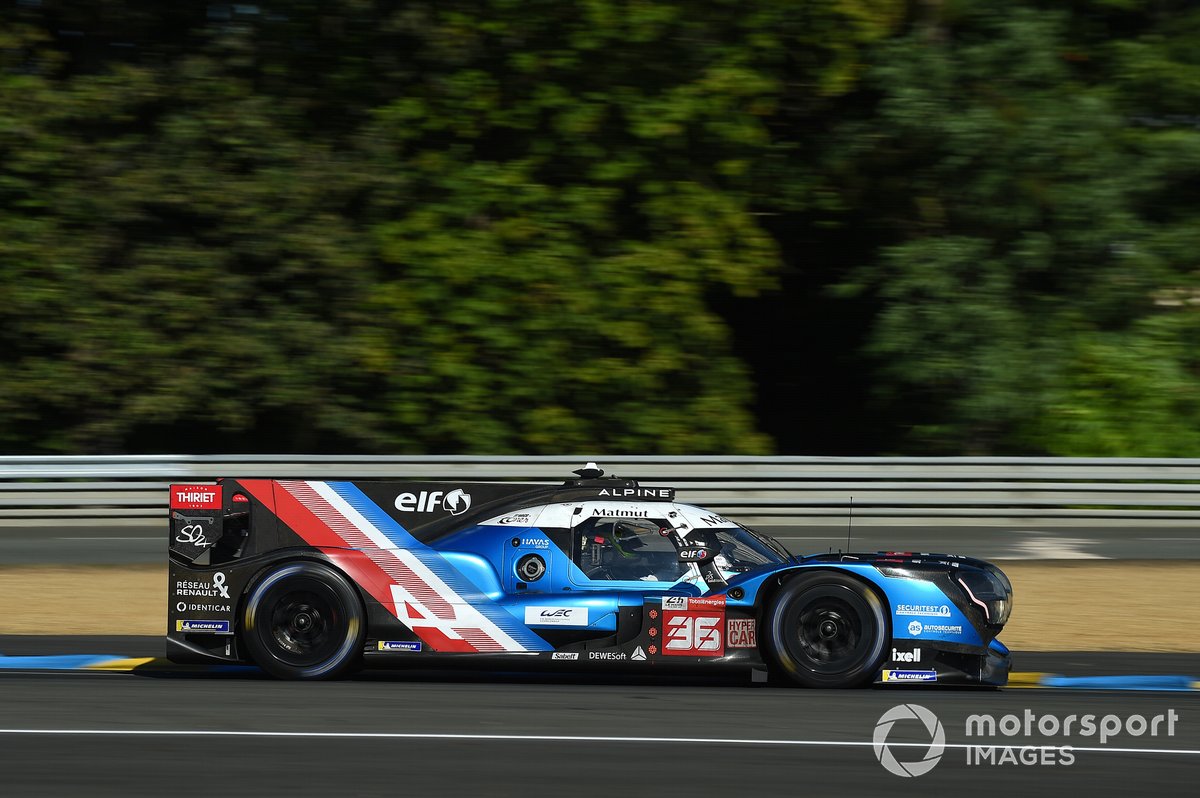 Sinault evaded answering the question when asked if his team and ORECA had been able to increase the tank size of the A480, something he had previously said was not possible.

"This is only one way to improve," he said.

"We have focussed on many parameters, working with [engine supplier] Gibson and with the drivers."

The Alpine had yet to complete a simulation of a full race stint on the conclusion of the first day of practice and qualifying on Wednesday.

Sinault explained that there is more scope for fuel saving at Le Mans than at the circuits visited by the WEC so far this season, calling the Circuit de la Sarthe "a very different track".

The three sections of the Mulsanne Straight and the drag from Mulsanne Corner to Indianapolis give opportunities for lift and coast to reduce consumption.

Alpine's energy allocation has been cut since the previous round of the WEC at Monza in July from 918MJ to 844MJ in the BoP table published ahead of the Le Mans test.

This reflects the amount of fuel the Alpine can taken on board rather than being an attempt to limit the number of laps it can do.

It will also have the effect of levelling up the refuelling times of the Alpine with the LMH cars, because the time the car spends with the refuelling hose attached in the pits is proportional to the amount of its fuel allocation used.

"With the new BoP there has been an adjustment that reflects the real picture; it does not help us, it just reflects reality," said Sinault.