After a 37-minute delay under a red flag following a full-course caution for Charlie Kimball going off, race leader Josef Newgarden almost spun on the run to Turn 1 as he ran over a pool of water.

Team-mate Power had followed him on the restart but under pressure from Dale Coyne Racing's Sebastien Bourdais, he spun into the pitwall and heavily damaged his car.

Power told NBC that he could not understand IndyCar restarting the race.

"I could not see a thing - and I had just one car in front of me," he said. "It just hydroplaned on me and was out of control.

"I just can't believe [IndyCar] went green with how bad it was and the amount of standing water. It's very disappointing, and to me, very dangerous.

"I don't know what you do in that situation, because if you completely back off, somebody will hit you and it becomes really dangerous.

"If you try to keep the throttle, you will do what I did and just spin. It's just a really difficult situation to be put in." 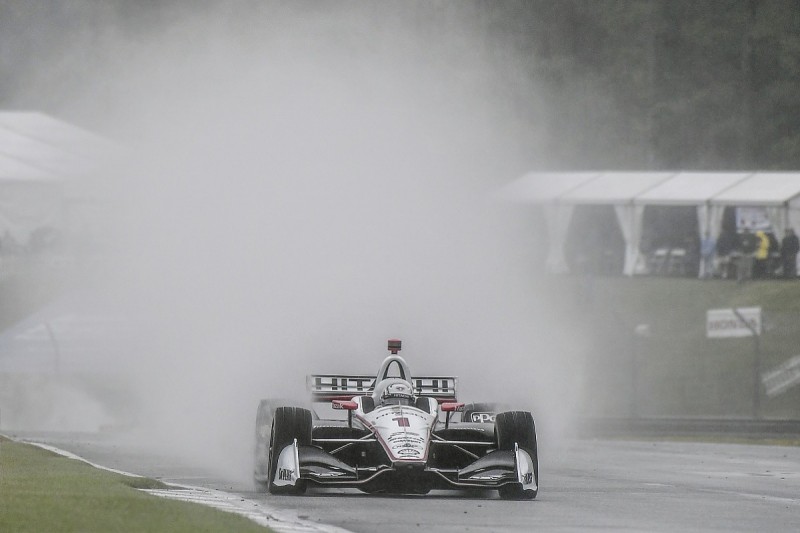 Newgarden said that Power could not be at fault for his crash.

"What happened with Will, I don't think is a driver error," he said. "I don't know how anyone is going to drive hydroplaning on the front straight.

"I think you would have had that for the rest of the track, too. A tough situation."

The reigning IndyCar champion added that postponing the race after a second red flag was the right call.

"When we started the race, the conditions were OK," Newgarden said. You could run at that level of rain. Then, it intensified right before that first [competition] caution.

"I think when the caution came out, it got to a point where it was just too much. There was too much puddling and pooling of water on every straight.

"Then the rivers started flowing [in the] high-speed compressions in the fast corners of Turns 1 and 2, 12 and 13, where the river starts to form.

"It's that this type of track with this water level was too much to race today. We've run here in the rain before, but it intensified to the point where you're starting to get in a situation where it's going to take it out of the drivers' hands."

Last year's Indianapolis 500 winner Takuma Sato said that drivers were left to trust nearby cars because visibility was heavily reduced.

"As you could see on TV, if you couldn't see the car, it was probably three times worse in the cockpit on the main straight or any straight," he said.

"You had to completely trust the guys that they were accelerating."