Newgarden moved into first place due to pitting one lap before a caution period, performing a similar strategy to Alexander Rossi and James Hinchcliffe - who joined him on the podium.

All three benefited when Tony Kanaan locked up his rear black Firestone tyres at Turn 1 when coming out of the pitlane on lap 23 of 85.

The front wing of his car became submerged in the tyres, requiring a caution period so marshals to push it out.

This turned the race away from Helio Castroneves, who had taken the lead at Turn 1 of the opening lap, going down the inside of polesitting Penske team-mate Simon Pagenaud from third place. 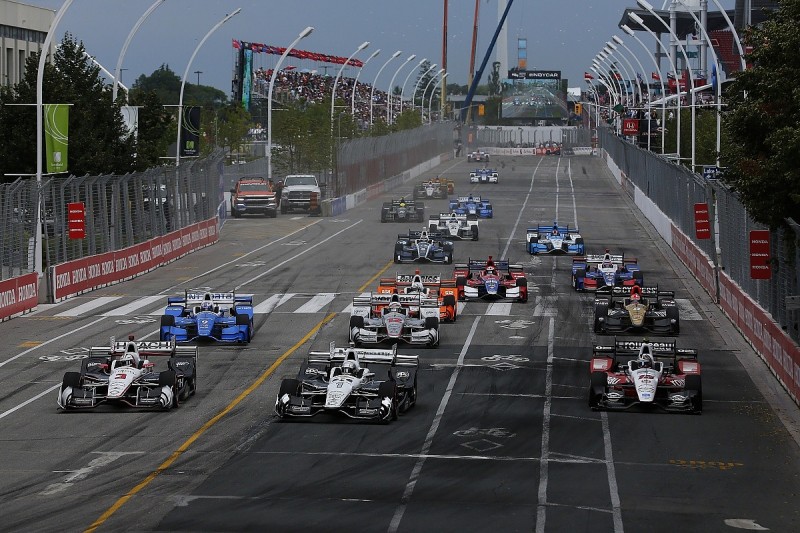 Castroneves then pulled away and looked set to claim back-to-back victories but having to pit under the yellow dropped him into the midfield.

Once ahead, Newgarden held a consistent gap of around three seconds to Rossi for much of the race, ultimately finishing 1.8704s ahead as the race ran green for the rest of its duration.

The runner-up finish is only Rossi's second podium in IndyCar beyond his 2016 Indianapolis 500 victory.

Hinchcliffe was third for a second-successive year at his home track.

Championship leader Scott Dixon recovered 10th, and maintained a three-point gap over Castroneves, after a collision with Will Power at the end of the back straight on the first lap.

He moved left approaching Turn 3 to avoid Rahal but went into the path of Power, who hit the left-hand wall.

Dixon needed a left rear brake replacing after the incident and dropped to the back of the field, while Power's car suffered steering damage and was eventually retired.

A drive-through penalty was also given to Dixon because of excessive work carried out while the pitlane was closed.

Kanaan was classified in 19th, two laps down.