McLaughlin, winner of the 2022 IndyCar opener at St. Petersburg, led for 186 laps having taken the lead on the opening lap from polesitter Felix Rosenqvist, but got caught behind traffic which allowed Newgarden in for a late charge.

Carrying more momentum through Turns 3 and 4, the #2 Penske caught the tail of the leader and went around the outside of McLaughlin to grab the win by 0.0669 seconds.

Having looked every bit as comfortable on the Texas oval as he did in his rookie season, McLaughlin led through an early caution period following Alexander Rossi's glacial trickle to the pitlane as his Andretti-run machine slowed to a crawl, maintaining that lead through the opening pitstop period - with Newgarden 12.5s behind on his Penske stablemate following the first pitlane visits.

But Newgarden drew closer as he picked his way through the order and McLaughlin had to contend with various bouts of traffic, and through three caution periods during the middle portion of the race, with Andretti rookie Devlin DeFrancesco proving to be the epicentre of all three.

Following that trio of interruptions, McLaughlin then had to contend with multiple plays for the lead from his rivals in the second half of the race; Newgarden attempted to wrest control of the race on lap 150, but the Kiwi repassed his team-mate shortly after.

Rinus VeeKay was next to mount an assault on McLaughlin, who began to drop back slightly as Will Power rounded both drivers to momentarily factor in the lead.

But content to remain within the pack for a spell, McLaughlin then repassed VeeKay on the 205th lap around the circuit - assuming the lead after the off-sequence Callum Ilott made a pitstop. Newgarden and Marcus Ericsson followed through soon after, dropping VeeKay from the victory battle. 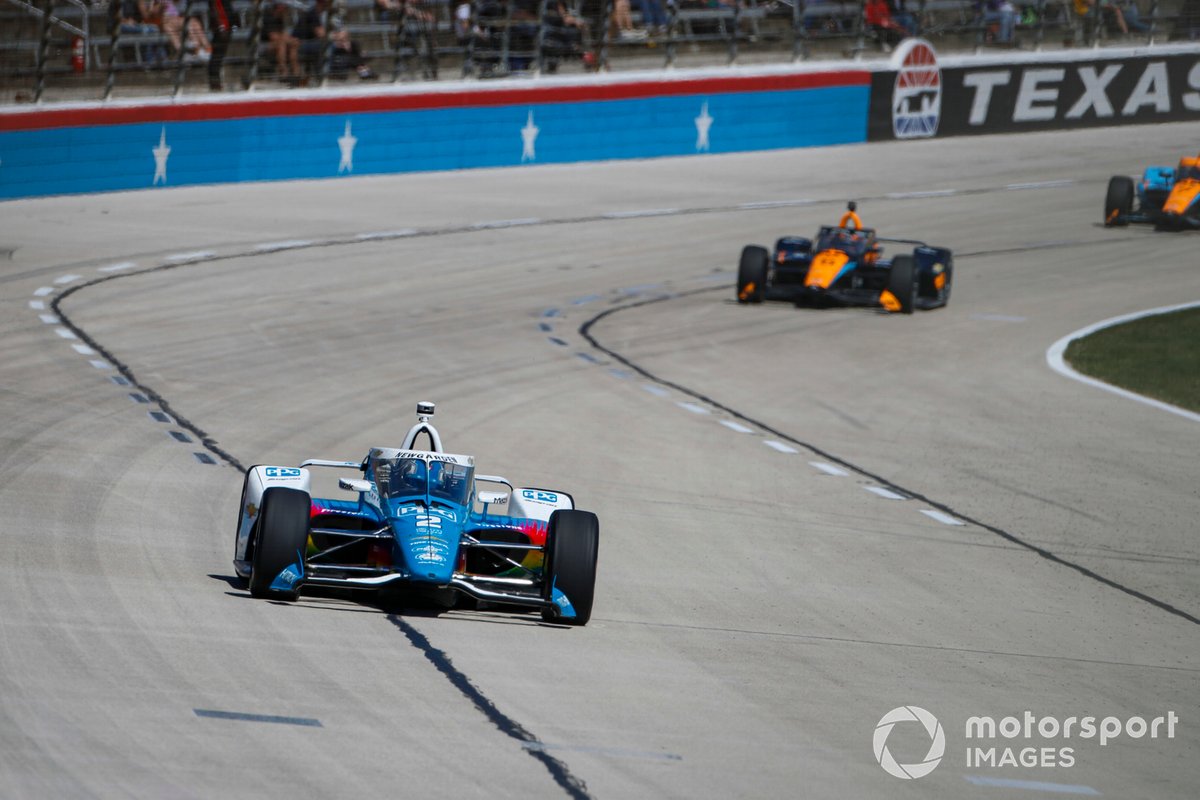 Initially looking serene out in front, McLaughlin got caught behind traffic which suddenly allowed Newgarden to charge behind him. With enough speed garnered from Turns 3 and 4 ahead of the final lap, the #2 Penske charged onto the tail of the leader and went around the outside of McLaughlin - pipping his team-mate to the line.

Behind the front two, Marcus Ericsson scored a worthy podium in third for Chip Ganassi Racing, while Power ensured all three Penske cars finished in the top four as he just held off his long-time rival Scott Dixon of Ganassi.

Dixon managed to edge ahead of Jimmie Johnson for fifth, as the seven-time NASCAR Cup Series winner enjoyed his most complete IndyCar weekend to date - and his first on an oval.

Johnson had been impressive in working his way up the field, and made his way up to the top five after passing Simon Pagenaud - whose lap times began to dwindle towards the end.

Reigning IndyCar champion Alex Palou completed the run of Ganassi cars, ensuring all four made it into the top seven, as Pagenaud ended his day three seconds off the Spanish driver.

Santino Ferrucci, who was a last-minute call-up for Rahal Letterman Lanigan's Jack Harvey after the Brit was not cleared to race following a heavy crash in second practice, finished ninth ahead of VeeKay - while rookie David Malukas was the final driver classified on the lead lap.

Andretti's miserable day at Texas was encapsulated by Colton Herta, who was the sole finisher from the four-strong team with 12th place; Rossi, DeFrancesco and Romain Grosjean all retired.