Scott Dixon: Ganassi at 'deficit' to Penske in IndyCar decider

"As a team, I think this is always one of our most difficult circuits," he said.

"This morning [in practice three], we made some good gains, but in the conditions this afternoon [in qualifying], we just didn't have the grip.

"It was kind of strange. The balance felt good. The car was kind of decent to drive, but just couldn't carry the speed through the corners.

"We almost didn't make it past group one, then just squeaked through in Q2.

"It's good to make it through to where we did. It was definitely hard work so a big credit to the team.

"We'll just have to see how the car is on the long run.

"We always know that the Penskes are going to be strong here.

"The other manufacturer's aerokit is going to be strong at this track.

"We know the deficits that we have. But we can still as a team overcome those, whether it's through strategy or by having a car on the long run that's hopefully going to be good.

Though Dixon said having won at Sonoma three times was not much comfort as each victory was "very different", he did point out that he secured the 2015 title by winning from ninth (pictured below) at the Californian track. 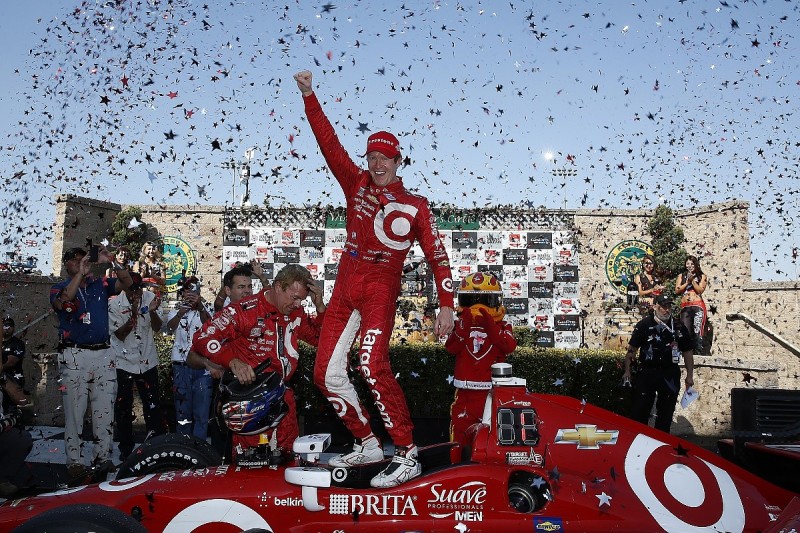 "Sixth position, you can definitely make lots happen from there," he said.

"I think in '15 we started ninth and we won that race.

"We all know how big a caution can be and when it falls, what it does to the field.

"So sometimes if you're at the front, you're a bit of a sitting duck in a scenario like that, as we've seen in the past."