Polesitter Rossi was the only driver to make a two-stop strategy work, despite the likes of Schmidt Peterson Motorsports's Robert Wickens and Indianapolis 500 winner Will Power considering similar plans.

The two-stop option relied on Rossi being able to stretch fuel significantly further than the three-stop strategy cars required.

Rossi's fuel mileage was strong enough that he had built an 18-second lead in the final stint, before easing off to win by 12s over Wickens at the flag.

"Without a warm-up [there was no such session at Mid-Ohio], you don't know what fuel mileage you're capable of getting," Rossi said.

"All of the work leading into the weekend is really focused on qualifying, so you don't really get race mileage information.

"We went into it with the option of doing the two-stop if we could hit a fuel number in the first two or three laps.

"We were able to do that while opening up a gap on Will [Power]. It was at that point that we decided to commit to it.

"It was concerning at times because there were guys who started off trying to do it, then bailed out.

"They were potentially quicker than me. If they pass me, I'd have to bail out as well and lose track position, or if the yellow comes out. We were exposed for a lot of the race.

"At the end of the day, it was obviously the quicker strategy. It was a huge testament to the pace of the car as well.

"To hit the fuel mileage we needed to hit, in two stops, I lifted [off the throttle] a lot of the lap.

"You have to be able to carry a lot of rolling speed, have a balance you're comfortable with."

Rossi's victory elevated him to second in the standings behind Scott Dixon, closing the gap to 46 points as a result of the Chip Ganassi Racing driver finishing fifth after fading during his stints.

Mid-Ohio has been one of Dixon's strongest tracks, having won there five times in his IndyCar career.

When asked if he could catch Dixon in the title fight, Rossi said: "Yeah, for sure. 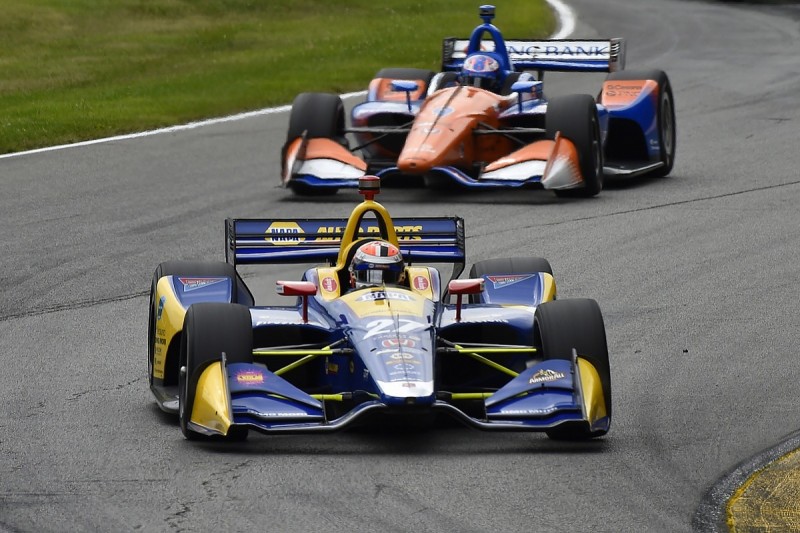 "Sonoma [the season finale] brings in so many different possibilities, being double points. I think the fact that all I heard about coming into this weekend was how he won five times around here, he's excellent at what he does.

"But you have got to capitalise on your good days and his not-so-good days, which unfortunately are slim.

"If we keep running the pace we've had all year, the rest will take care of itself. That's all we're focused on right now.

"By no means is he going to be easy to beat. By no means do I expect to go to Pocono [the next round] and win again and him to finish fifth."