He narrowly fended off Josef Newgarden, who led a quartet of Penske Dallara-Chevrolets in second to fifth.

A great restart after the first of two caution periods got Dixon ahead of Newgarden and he had the speed to ensure he stayed in front until the chequered flag.

In the first half of the 55-lap race, the Team Penske cars carried on the form they had showed in practice and qualifying as polesitter Helio Castroneves and Newgarden battled for the lead.

Both were running a three-stop pit strategy, but Newgarden pitted one lap after Castroneves and used his fresher tyres to good effect as he went round the outside of Castroneves at the first corner on lap 20.

Newgarden ran at the front until the first caution, caused by Takuma Sato spinning and stalling on the kink on the back straight.

By that time Dixon, who had shadowed the Penske drivers early on, had moved up to thanks with slick stops and rapid in/out-laps.

At the restart Newgarden's harder Firestone tyres were not at the right temperature and Dixon used his soft tyres to replicate Newgarden's move on Castroneves by going round the outside at the first corner.

Dixon proceeded to pull away in his Honda-powered machine and made a second strong restart.

That caution had been caused when Tony Kanaan violently hit the wall at the same place Sato went off, having clipped Alexander Rossi.

As the race went green with seven laps to go, Dixon used his push-to-pass boost to stay ahead, take victory and extend his lead in the championship standings to 34 points. 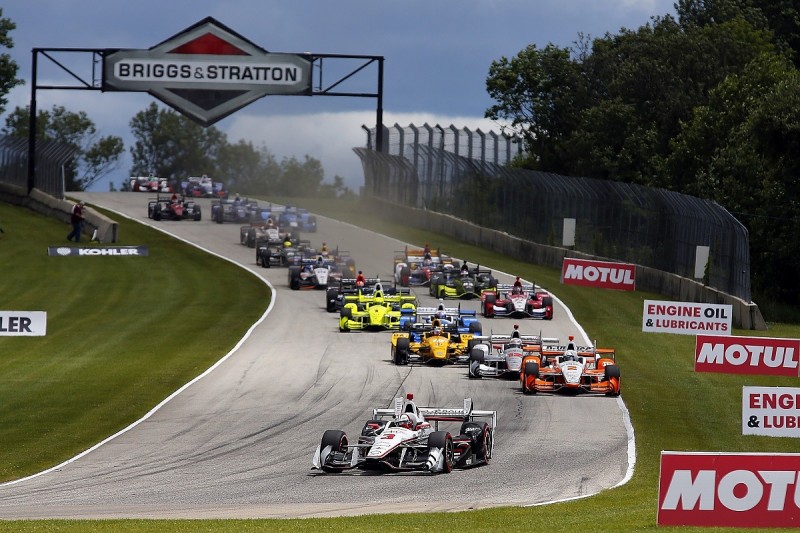 Third place went to Castroneves. Leader for most of the first stint, he didn't have the pace after his initial pitstop and couldn't keep up with the front pair.

He mistakenly pitted one lap early for his final stop and had to switch to a fuel-saving strategy in the closing laps.

Fourth place went to another Penske car as Simon Pagenaud got the upper hand on his team-mate Will Power, who had to give up positions on several occasions after stewards judged him to have blocked rivals.

Charlie Kimball secured sixth place using the good pace of the Chip Ganassi car to get the better of Ed Jones, who himself had a strong race to move up from his starting position of 11th for Dale Coyne Racing.