Penske's Josef Newgarden overcame a pair of late-race restarts to execute a flawless IndyCar race at Road America, taking his third victory of the season.

Newgarden, who had been burned in 2021 following a late caution and hit gearbox trouble with two laps left as the race restarted, suffered no such trouble to beat Indianapolis 500 winner Marcus Ericsson home - as the Swede dispatched polesitter Alexander Rossi late on.

Rossi had been assured in the opening part of the race from pole, keeping Newgarden at bay in the opening 15 laps, but the order switched during the first phase of pitstops as they both came into the pitlane simultaneously.

Making the switch to the black-walled hard tyres, the combination of the reliably swift #2 Penske crew and Rossi having to pause as Scott McLaughlin pulled into the pitbox ahead of him delayed the Andretti driver sufficiently so that he emerged behind his foe.

Newgarden then took the initiative out in front, building a comfortable lead over Rossi as the Andretti driver perhaps had worse luck with traffic, and looked to be in cruise control during the middle portion of the race.

But after the final round of stops on lap 42, Rossi was starting to make inroads into Newgarden’s lead, trimming it to 3.2s and closing in before the safety car was called with eight laps to go as Pato O'Ward's Arrow McLaren SP began to lose power, and engine died at The Kink, bringing out the yellow.

Rossi, who had pared his disadvantage down to 2.8s, now had virtually no disadvantage. But Newgarden bolted on the restart with five laps to go and got comfortable jump on Rossi, only for his efforts to be undone by former teammate Helio Castroneves spinning his Meyer Shank Racing car and stalling.

The caution again came out for two laps as Castroneves' car was restarted, prompting a three-lap shootout to the finish.

Once more, Newgarden got the jump on Rossi - leaving his rival open to Ericsson, who dived inside Rossi to grab second.

Keeping a strong advantage over Ericsson, Newgarden crossed the line to win by 3.3s - winning $1m in the process for securing victories on an oval, road and street course this season, with half going to charity.

Ericsson had survived an early skirmish with Chip Ganassi Racing team-mate Alex Palou on the lap 4 restart as they battled for third, as last year's winner appeared to tuck in a tad too abruptly and the contact sent Palou into the gravel with his front-left suspension track rod broken. 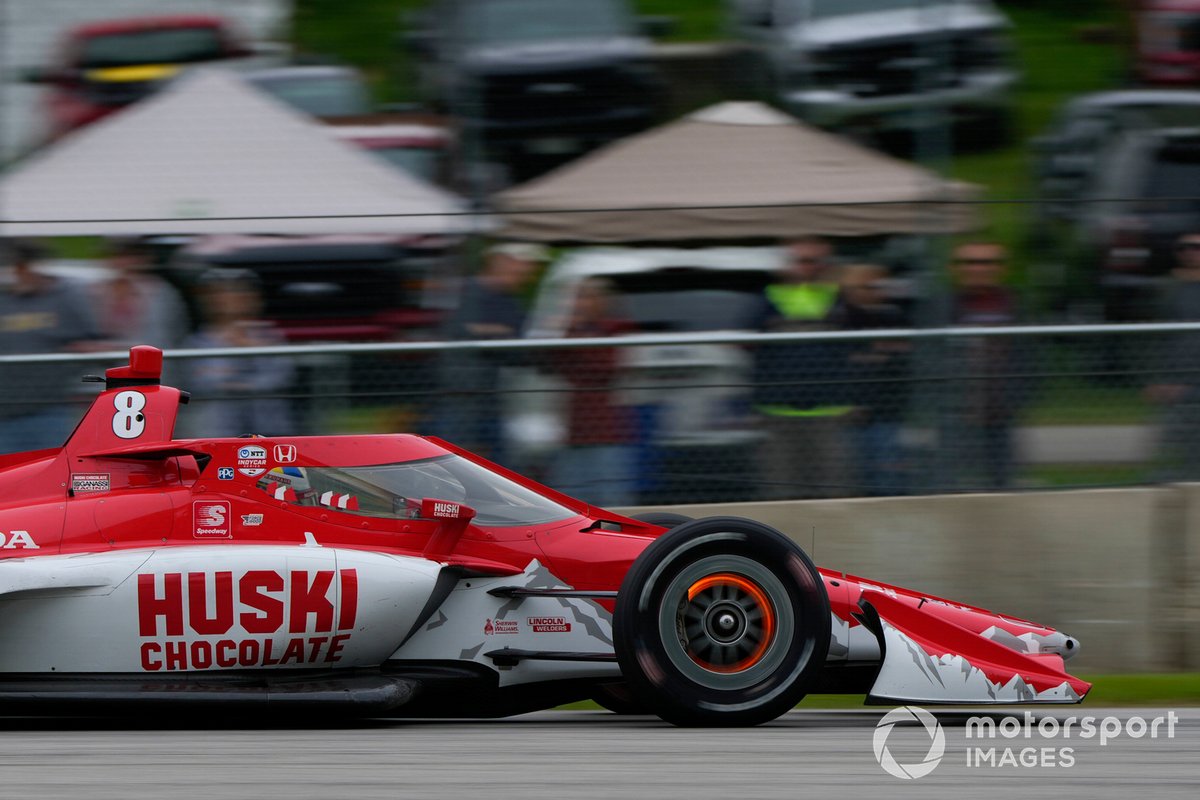 Having looked good for third all race long, the final restart gave Ericsson the ammunition to mount a late move on Rossi and grab more points - in the process, reclaiming the lead of the IndyCar standings as erstwhile leader Will Power endured a difficult run to 19th.

Rossi held on for third despite a late assault from his Andretti team-mates Colton Herta and Romain Grosjean, and in the melee Herta had to defend hard from Grosjean on the run down to Turn 5.

On the last lap along the main straight, Herta had no push to pass left and thus had to concede position to Grosjean through to fourth, but it remained a good recovery from 11th on the grid after being handed a five-place grid drop.

Felix Rosenqvist made an alternate strategy work to get sixth place, he and Graham Rahal making their first stops under the third yellow flag period - produced by Devlin DeFrancesco misjudging a pass on Power into Turn 5, clipping the #12 Penske's rear and sending him spinning into the wall on the outside of the track, where he broke off his front wing.

Power was able to return to the pits and collect a new front wing and stay on the lead lap.

Having hit his ambitious fuel targets, Rosenqvist was able to find parity with the frontrunners by the end, but couldn't pass Herta for fifth, and only just held off McLaughlin and Rahal at the chequered flag.

Ilott made his return from the bench after breaking his fourth metacarpal in his heavy Indy 500 crash, getting through to the Fast 12 in qualifying but sustaining a crash at Turn 14.