Graham Rahal believes he can dominate IndyCar's Detroit double-header weekend if he can qualify well, based on his Friday practice pace

Fifth and fourth in the championship over the last two years, the Rahal Letterman Lanigan driver is only 15th in the 2017 standings so far with just one top-six finish to his name this year.

But he was quickest in Friday morning practice and second in the afternoon, and believes his first win of the season is on the cards this weekend.

"I think if we start up front, we can take off and dominate this thing," said Rahal.

"I really feel that confident about where we're at.

"If we can be on that front row, we'll be strong - if everything goes to plan.

"The car seems to be very strong, very competitive right off the trailer.

"The first session, we didn't even change anything. I mean, there was no reason to.

"I want to win a race now. It's a good opportunity for us. I know our strength is race day. Always has been." 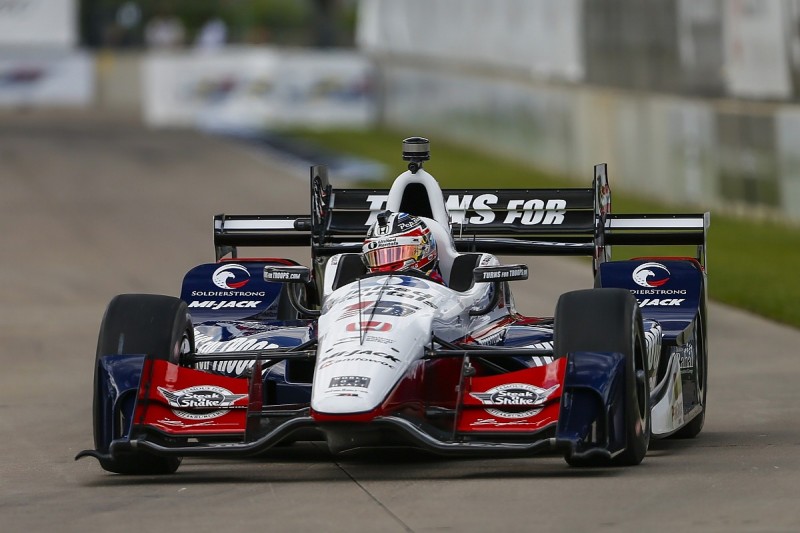 The Detroit schedule and qualifying system has been simplified for this year.

For Detroit, the field is divided in half and each group of 11 gets 12 minutes on track and the best times decide the grid.

There are separate qualifying sessions for the two races, held on Saturday and Sunday mornings.

"In years past, it was practice on Friday morning, qualify Friday night, practice, then race, then qualify, then race. It was always a little funky," said Rahal.

"I like the consistency of the [2017] scheduling. We qualify in the morning, go racing.

"Hopefully we'll be up front."

Rahal said he was using a very different set-up for Detroit this year.

"This set-up kind of started with a concept out of Long Beach," he explained.

"It is very, very different from what we ran here last year, or over the last handful of years.

"But this was something that we had tried at Long Beach, in basic theory, and it worked relatively well.

"I wish we had found this at St Pete or something like that, honestly. But we live, we learn.

"I think the tyre has changed quite a bit this year. We've had to chase that. Maybe some guys haven't.

"Certainly I think what we've got going here is better. I don't want to get over-confident, but hopefully it's going to be strong."