Scott McLaughlin kept himself in the IndyCar title race after scoring a dominant victory at Portland International Raceway, finishing ahead of Penske team-mate and points leader Will Power.

Polesitter McLaughlin dominated the race, leading 104 of the 110 laps, to score his third win of the 2022 season. It was enough to keep the New Zealander in the title race ahead of next weekend's Laguna Seca decider, 41 points shy of Power.

A late caution caused by a clash between Rinus Veekay and Jimmie Johnson briefly threatened McLaughlin's victory hopes, but the Penske driver held his nerve to lead Power home after the restart.

From pole position, McLaughlin led team-mate Power, but Christian Lundgaard, who started fourth was haunting them, and went around the outside of Power into second.

Pato O’Ward, the highest started on the harder Firestone primaries, passed Alex Palou to grab fourth ahead of the Chip Ganassi Racing-Honda.

Behind Palou, David Malukas bounded up to sixth ahead of Felix Rosenqvist, and Andretti Autosport’s primary runners Colton Herta and Alexander Rossi.

One driver struggling to get his tyres up to temperature was Josef Newgarden who slipped to 11th by Lap 4, behind Graham Rahal.

By Lap 6, McLaughlin had a three second lead over Lundgaard, with Power running a further 1.1s adrift but 1.7s ahead of O’Ward, who was working hard to keep his harder-tyred car ahead of Palou and Malukas.  Dixon had made his way up to 14th, but Ganassi team-mate Marcus Ericsson slipped to 19th.

McLaughlin went to Lap 21 before pitting, with Lundgaard stopping a lap later, but a slight delay on the refuelling and some strong out-laps from Power meant he emerged behind the #12 Penske.

McLaughlin’s lead over the yet-to-stop Ericsson was five seconds by Lap 28 of the 110, with Power having to work hard not to get too close to Ericsson and burn up his tyres but also keep Lundgaard in his mirrors.

An early stop for reds worked out well for Newgarden, who was now seventh ahead of Rahal, Colton Herta and Alexander Rossi, while early stopping had also seen Dixon move up to 11th.

Ericsson finally pitted at the end of Lap 31, but the tactic hadn’t worked out well, and he was down in 18th, where he started. Meanwhile, Power now had a near-eight-second deficit to McLaughlin, and was 1.4s ahead of Lundgaard, who was being gradually gained on by O’Ward. 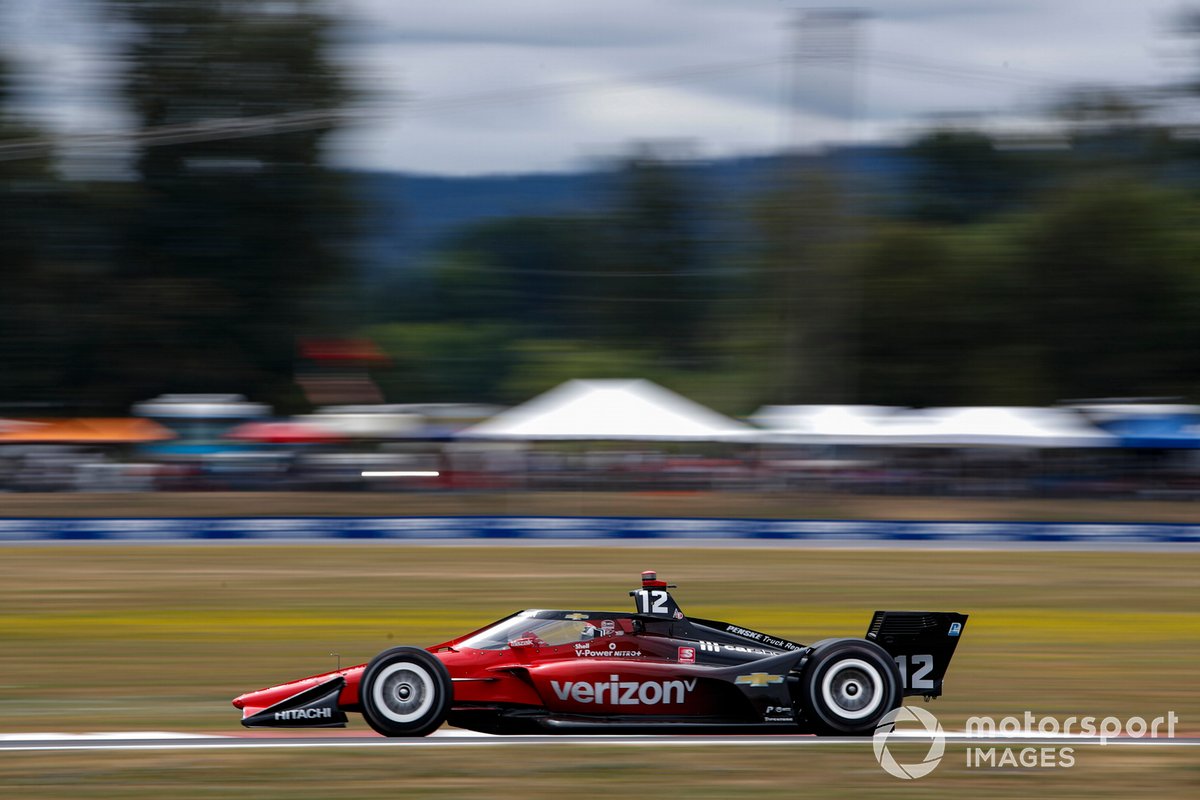 Power managed to shave the margin to McLaughlin down to 5.5s, and had stretched his margin over Lundgaard to over six seconds, and the #30 RLL car was now less than a second ahead of O’Ward.

Newgarden pitted from fifth on Lap 45, the same lap as Dixon, the pair of them taking on scrubbed reds. A lap later, Lundgaard pitted to get off his worn reds to grab a set of primaries.

McLaughlin and Power stopped as they completed Lap 47 to grab primary tyres, and they were followed in by O’Ward, whose AMSP team got him out ahead of Lundgaard, struggling on the primaries.

Now O’Ward was on reds again, and he would endeavour to close the eight second margin to Power, although he’d have to also pass the again late-stopping Ericsson, who was also on the softer alternates.

Unlike his team-mates, Newgarden was on reds and was making the most of them, hustling up onto the tail of Lundgaard, and he calmly outbraked him into Turn 1 on Lap 55 to claim fourth.

Shortly after the halfway mark, McLaughlin’s lead over Power was 4.9s, but the pair were being reeled in by O’Ward and Newgarden.

Lundgaard was a further five seconds back, and a similar distance ahead of team-mate Rahal, who had Rossi filling his mirrors, with Dixon, Herta and VeeKay close behind. Palou was losing time in 11th, reporting something amiss at the rear of his car.

It wasn't long before O’Ward was within a second of Power, with Newgarden only two seconds further back. Having drawn within 4.4s of McLaughlin, Power was briefly stymied by the lapped Johnson but by diving past the #48 Ganassi car at Turn 1, Power bought himself some breathing room as O’Ward couldn’t pass Johnson until the back straight.

Rossi was the first driver in the Top 10 to make his final stop at the end of Lap 77, and Lundgaard, Dixon, VeeKay and Palou followed suit a lap later. Sadly Lundgaard stalled as he tried to leave his box.

McLaughlin, Power, O’Ward, Newgarden, Rahal and Herta stopped next time by, and the remained in that order, but in condensed form.

McLaughlin had lost time on his in-lap when Felix Rosenqvist emerged ahead of him from his final stop, cutting his margin over Power to 1.4s.

Power had got McLaughlin’s lead down to a second when the first caution of the day flew, as VeeKay misjudged lapping Johnson approaching Turn 1, tucking back in before he had cleared the Ganassi car. Instead he squeezed Johnson into the wall, breaking the NASCAR legend’s suspension.

Following the rash of stops, Rossi had moved up to fifth ahead of Dixon, Rahal, Herta and VeeKay, while Lundgaard’s stalling had dropped him to 10th, although still ahead of Palou.

McLaughlin made no mistakes on the restart, but behind O’Ward tried to outbrake Power into Turn 1 and  nudged into the Penske driver. 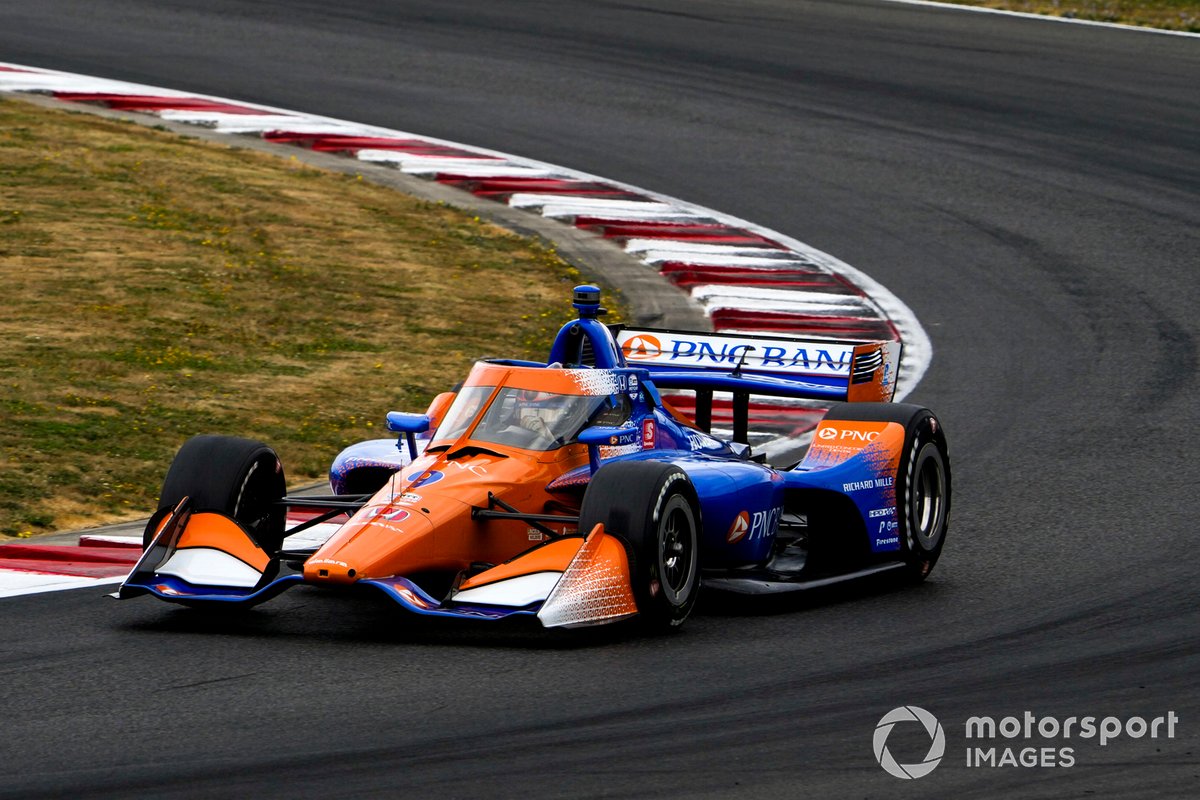 Right behind them, Dixon had ducked past Newgarden and Rossi as they fought over fourth. Then as O’Ward lost momentum from his failed pass on Power, Dixon was now on his tail as they exited Turn 3. The AMSP driver moved hard right into Turn 4 to block Dixon and curb his momentum, so was ordered by Race Control to relinquish the spot to the six-time champion.

Behind them, Newgarden struggling on the primaries lost places to Rossi, Herta, Rahal and Lundgaard, but regained a spot when Lundgaard had to pit to remove a sign he collected, when trying to pass the Andretti driver into Turn 1.

At the front, McLaughlin cruised through the final laps to take victory from Power and Dixon. After picking up damage in he clash with Power, O'Ward managed to bring his wounded car home in fourth.

Rahal took fifth ahead of Herta and Rossi, while Newgarden eighth ahead of the impressive Callum Ilott of Juncos Hollinger Racing, and Rosenqvist.

Ericsson and Palou finished 11th and 12th, Palou now unable to retain his championship. O’Ward, too, has now been eliminated.

Power leads the championship by 20 points from Dixon and Newgarden.