No other driver broke through the 220mph barrier during a session that featured nasty crashes for both title contender Helio Castroneves and practice pacesetter Ryan Hunter-Reay.

Castroneves lost it going through Turn 1, while Hunter-Reay's car snapped into the wall exiting Turn 3.

While Castroneves was quickly cleared to drive again by the medical team, Hunter-Reay will be taken by road to hospital for further checks. He got out of his car unaided but limped as he was helped away by safety crews. 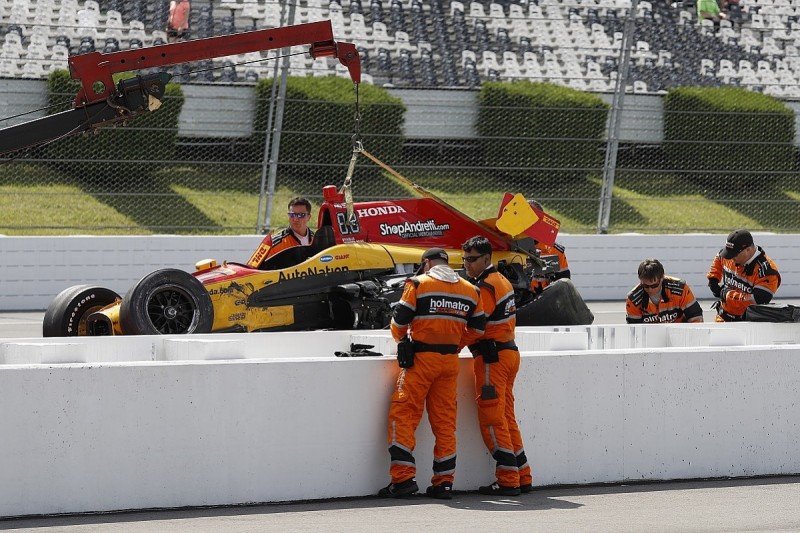 Reigning series champion Simon Pagenaud will join Sato on the front row after posting an average of 219.395mph.

Charlie Kimball sat top of the standings for much of the session before being edged down to third in an all-Ganassi second row alongside Tony Kanaan, the final man to break the 219mph average barrier.

Will Power and Alexander Rossi rounded off the top six.

Graham Rahal clung on to seventh place despite picking up a slow puncture late into his second lap.

Alongside Rahal will be Gabby Chaves, as the Harding Racing team made the top eight for only its third IndyCar start.

Championship leader Josef Newgarden had a poor run, losing 1.2mph on his second lap in windy conditions and ending up 14th.

Ed Carpenter missed qualifying entirely after a crash in practice.

Despite its best efforts, his Ed Carpenter Racing team missed the technical cut-off for qualifying by just six minutes.

Pocono IndyCar: Hunter-Reay out of hospital but in doubt for race