Helio Castroneves led a Penske top-three sweep in Pocono IndyCar qualifying, although team-mate and championship leader Juan Pablo Montoya faces the prospect of fighting through from the 10th row

Castroneves bumped Simon Pagenaud from pole with a two-lap average of 220.530mph, while the 220.398mph average set earlier by Will Power - who was second in line to qualify - proved good enough to keep him in third.

Based on the performance of his colleagues Montoya might have expected to have started up at the front with them.

But the Colombian encountered a load of understeer in the first corner of his first flying lap and was forced to lift off the throttle.

His second lap was a little better, but the combined average of 217.194mph ultimately left him down in 19th.

Main title rival Graham Rahal rubbed some additional salt into Montoya's wound's by qualifying fifth-fastest and best of the Hondas, while Ganassi's Scott Dixon, who currently sits third in the points, was forced to settle for 11th.

Dixon's disappointing run capped a tough day for Chip Ganassi Racing, which will spend the next 24 hours preparing a spare car for Charlie Kimball after he crashed heavily in Turn 3.

Kimball, who was fastest in morning practice, understeered badly through the first corner, and made some adjustments in the cockpit in an attempt to dial it out.

But it appeared that he went too far: as he entered Turn 3 the rear stepped out and sent the car looping along the catch fencing.

His car was extensively damaged, as was the fence, and the session was stopped for the best part of an hour to allow for repairs to the barrier. But Kimball himself was unharmed.

"I went into Turn 1, and the car really caught me out with the handling and I made some adjustments and maybe I was a little aggressive, but it's qualifying and you've got to go for it.

﻿Follow the Pocono IndyCar race as it happens with AUTOSPORT Live from 7.30pm UK time on Sunday 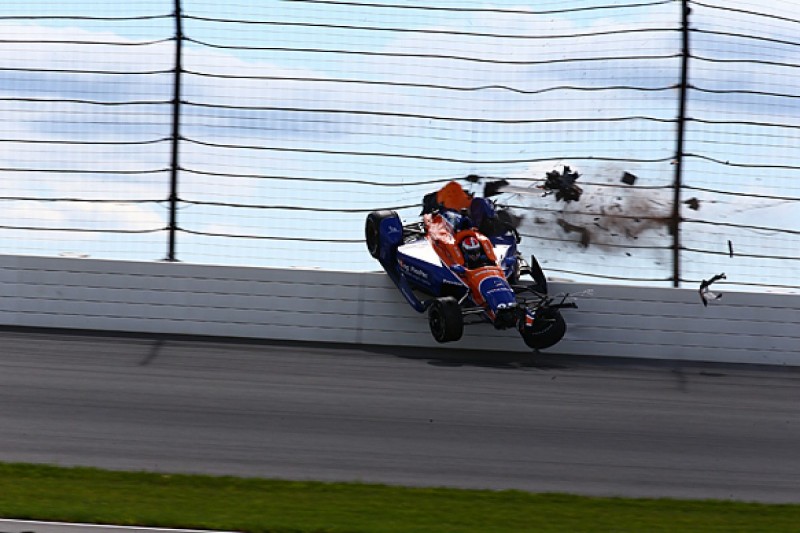 Order set by average speed over a two-lap run