The race was delayed by almost five hours due to storms in the area, but when the race got underway Newgarden and Will Power almost immediately got past their polesitting team-mate Pagenaud and set about controlling the race.

Pagenaud was credited with leading the opening two laps, which took place under caution, but Power then assumed the lead, staying out in front until the 49th lap of the 300-lap event, when Newgarden got by.

The championship leader didn't have long to enjoy the lead at first, with the rain returning two tours later, bringing a temporary halt to proceedings four laps after.

After a 25 minute stoppage, the race resumed and Newgarden was in class of his own for the remainder of the event, leading over 245 laps of the 300 lap contest.

He held Power at bay until the final round of green flag pit stops when the 2014 series champion ran too deep into the pit lane, a mistake which he was later punished with by being forced to take a stop and go penalty.

That allowed Pagenaud, who had a relatively anonymous run in third for much of the race, to move back up to second.

It looked set to remain a Penske one-two until a late race caution for a stopped Ed Carpenter.

The yellow flag period gave Dixon, who was yet to make his final pit stop, a free pit stop, putting him in a prime position to make a late race charge with new tyres.

It was a lucky turn of events for the Ganassi driver who had struggled for much of the race and had been a lap down on two occasions. 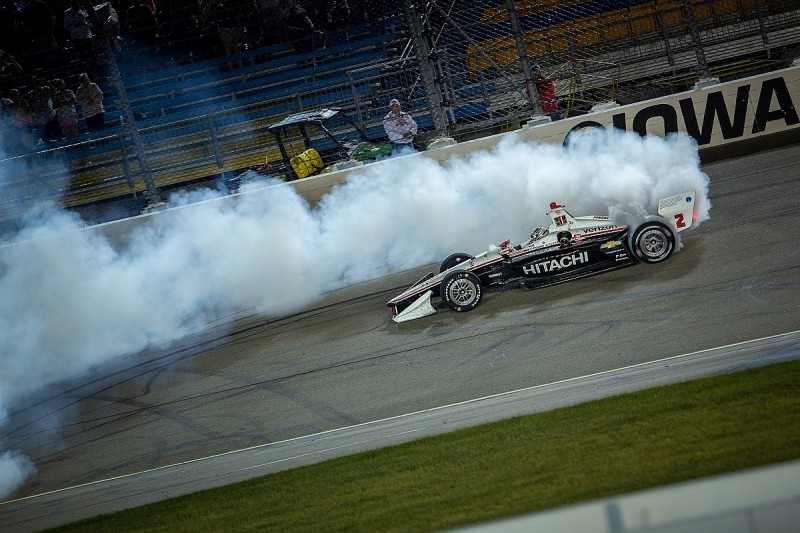 He breezed by last year's winner James Hinchcliffe and Indy 500 winner Pagenaud in the sprint to the end, but couldn't quite make an impact on Newgarden's masterful run at the front of the field.

Hinchcliffe and Pagenaud held station to claim third and fourth respectively, with Spencer Pigot capping off a strong run to finish fifth, having run in the top-five for much of the race.

Alexander Rossi, who was another driver to make a late call to take new tyres in a bid to make his way to the front, finished sixth ahead of Andretti Autosport team-mate Zach Veach, who was the last runner to finish on the lead lap.

Graham Rahal and Sebastien Bourdais were eighth and ninth respectively, while Tony Kanaan took his and A.J. Foyt Racing's first top-10 finish since the Indy 500 by finishing 10th.

Santino Ferrucci missed out on a top-10 result, claiming 12th behind Marcus Ericsson, but made more passes than any other driver after running a bold high line on track for much of the race. H

e made 51 on track passes, 31 more than Ericsson who had the next highest tally.

There were five retirements from the race, with Colton Herta another late retiree along with Carpenter.

Sage Karam and Takuma Sato, who had been running comfortably in the top-five, were sidelined after a collision on lap 188.

Marco Andretti was the other driver to retire after a dismal display. The third-generation driver was called into the pits on lap 180 for failing to keep to the race's minimum speed.