At Road America last weekend, Andretti's Alexander Rossi outqualified Penske drivers Will Power and Newgarden, then led all but one lap on the way to winning by half a minute.

That brought Rossi within seven points of Newgarden in the championship, and with three of the seven remaining races - including the finale at Laguna Seca - being held on road courses, alarm bells have rung at Penske and its engine supplier Chevrolet.

Chevy had planned a manufacturer test at Road America two weeks ago, but it was postponed due to bad weather.

So the Chevy teams plus Honda runners Harding Steinbrenner Racing (with Colton Herta) and Andretti (with the team's Indy Lights driver Ryan Norman) rearranged the test for Mid-Ohio, venue of round 13 next month, on Tuesday this week.

The urgency of the situation meant the three Penske drivers covered 325 laps between them through the day, despite Power losing time due to an engine failure and missing out on a fresh-tyre run.

Newgarden said the trio started off with similar set-ups then covered a lot of ground.

"Obviously I can't get too specific, but I think we definitely found some finetuning stuff that each of us individually preferred, but at the same time we found improvements that push us forward collectively," he explained.

"We turned a lot of laps. In the afternoon, I don't recall getting out of the car at all. Just did four hours straight, in and out of the pits." 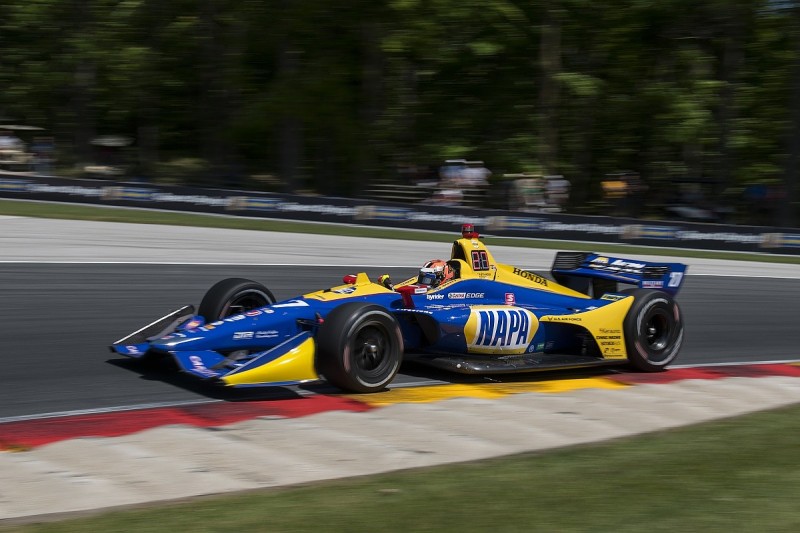 Asked where he thought Andretti Autosport was gaining time, Newgarden echoed Power's suggestion from the race weekend that it was "a little bit of everything".

"Andretti have quite a bit of strength right now, and with Alex in particular," said Newgarden.

They're just getting it 100% right, and here and there we're just a fraction off getting it right.

"And when you apply that to a track as long as Road America and a race with no yellow flags, that advantage tends to look huge.

"But we're plenty capable, I have total faith in the team to flip the situation, but it is funny how this game changes so easily.

"Last year we struggled on street courses for the most part, and yet we worked so hard over the off-season, the guys did an amazing job and our street course car is phenomenal now.

"And it's not like our road course car is bad: we just need a little more work on it to get us on par with our main rivals, and that work needs to come from us and from Chevrolet, working in unison."

Asked if he was worried about his points lead reducing, particularly with nearly half the remaining events on road courses, Newgarden replied: "I wouldn't say 'worried' is the right word, but obviously we know he's there, we've seen him coming.

"But I have the utmost confidence we can find a way to step up because we always do."