At the start of the race, polesitter Palou beat fellow front-row starter Alexander Rossi of Andretti Autosport, the latter also being jumped by the Chip Ganassi Racing-Honda of Scott Dixon, who had started third.

Dixon moved right to protect the inside line and started drawing alongside Palou, but got a tap from the Arrow McLaren SP-Chevrolet of Felix Rosenqvist who then blew through the chicane. That nudged Dixon enough to send him fully alongside Palou and miss his own braking point, going the wrong side of the apex curbs of Turn 2.

Palou also couldn’t turn in with his team-mate fully alongside at the same speed, so they both crawled through the chicane on the wrong line and rejoined fourth (Dixon) and sixth (Palou).

Rossi, Colton Herta and Conor Daly had also failed to make the chicane, and so this quintet, along with Rosenqvist, were sent to the back of the field, with Palou leading the bunch in 16th. The drivers had been told in the pre-race meeting that anyone who failed to negotiate the Turn 1/2 sequence would be moved back behind all those who did make it through.

“I didn't see any replays, so I don't really know what happened there,” said Palou.

“I made it through the chicane, and I said, OK, I only lost like five positions, which is a lot, but I said, ‘At least I'm not out.’

“And then IndyCar decided that was not penalising enough, and they put me in the back, which I don't know what they want me to do at that point. Do they prefer me to like completely stop the car and make that corner, making the race unsafe? 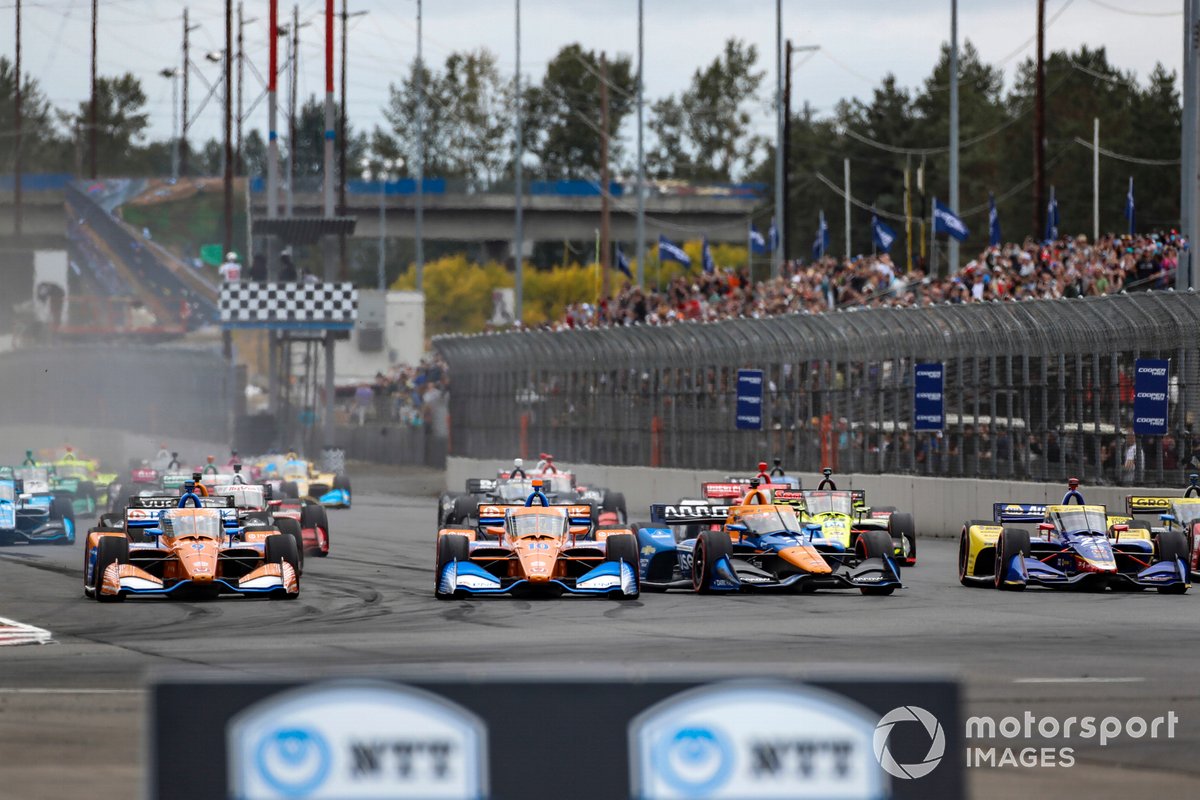 Later asked about his mental state when informed of the penalty, Palou insisted he was angry but couldn’t adopt a defeatist attitude.

Palou and the other penalised drivers elected to pit under the caution that had been caused by more Turn 1 chaos further back in the pack, knowing they could make it on just two more stops. Palou, Rossi and Dixon were able to save enough fuel and move forward and finish in the order in which they started.

“When they were taking a long time to penalise us, it was counting laps,” said Palou.

“I was like, OK, this is a good thing; I know we can make the fuel mileage to make it in two only stops.

“We knew we had a really fast car. Even if we were on the same strategy as everybody, maybe we were not able to win, but I think today we were able to be in the top five, top six without a different strategy.”

Pato O’Ward, his primary title contender, finished a desultory 14th, allowing Palou to move back to the head of the championship table by 25 points. The Spanish sophomore said whatever the outcome of the race, he was going to be reasonably content so long as he beat his main rivals in the points race.

“I knew I had to be in front of Pato, Dixon and Newgarden to be happy tonight,” he said.

“I was not thinking at all the championship, and I think that gave us the win today, otherwise Rossi would have passed us.”