O’Ward was the first driver to set a representative time on used reds in the Fast Six shootout, a 1m07.085s, before pitting immediately to grab another set of worn reds.

His time withstood the first efforts by Scott McLaughlin of Team Penske and his own team-mate Felix Rosenqvist.

Then the Mexican lowered the mark still further to 1m06.705s that ensured he was over 0.13s ahead of McLaughlin, and half a second up on Rosenqvist, who in the previous two segments had looked faster than the 2018 Indy Lights champion.

In fact, Rosenqvist was sent to the outside of the second row by Andretti Autosport driver Colton Herta.

Scott Dixon was the fastest of the Chip Ganassi Racing-Hondas in fifth, albeit 0.7s off the ultimate pace at a track where he has won six times, while Simon Pagenaud’s decision to run two sets of reds on his Meyer Shank Racing-Honda in Q2 helped get him into the Fast Six but obviously hampered him in the final shootout. 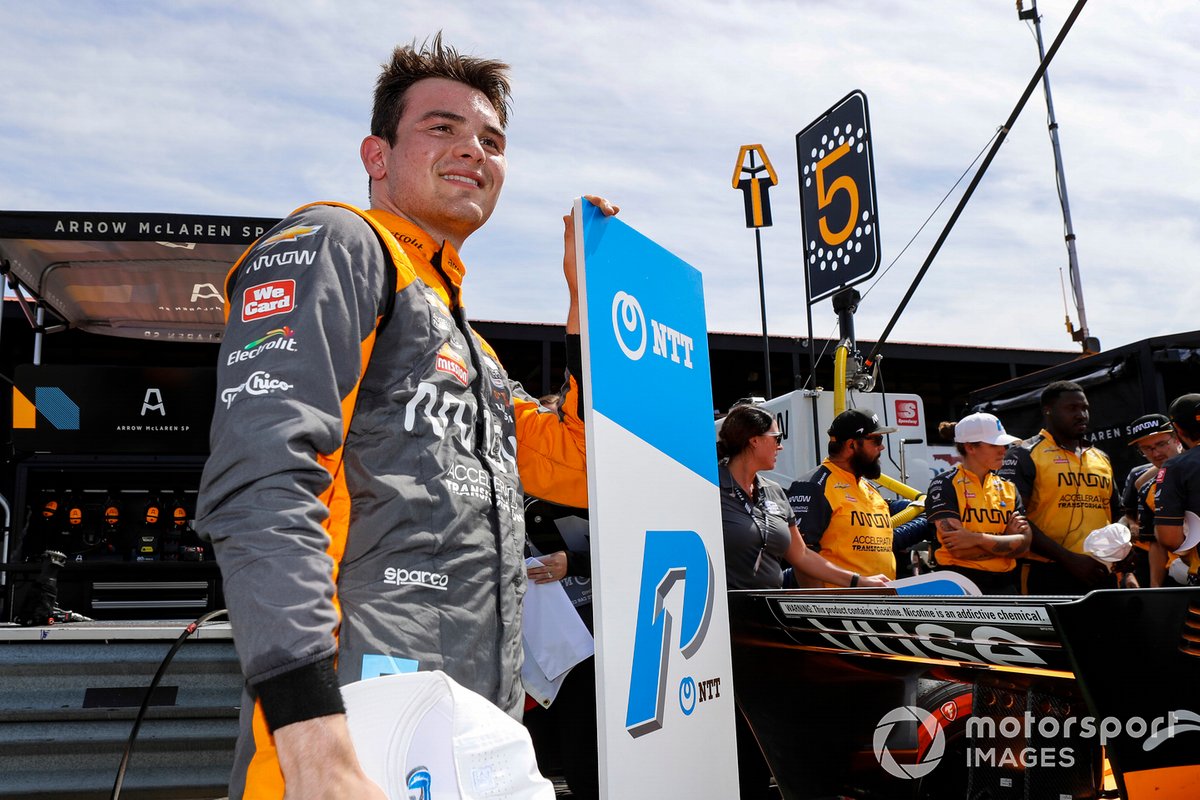 McLaughlin, Pagenaud and Callum Ilott started the Q2 session on Firestone’s alternates, and sure enough they went to the top, perhaps surprisingly with Ilott at the top initially, before McLaughlin beat him by 0.12s.

However, while he was still on primaries, David Malukas was able to send the Dale Coyne Racing w/HMD-Honda to the top of the speed charts with a 1m07.130s.

Pagenaud and Alexander Rossi then took turns at the top, before Herta ducked down to 1m06.7953s, and was then shaded by Dixon by a mere 0.0007s.

The times continued to tumble, with the AMSP cars of Rosenqvist and O’Ward again 0.2s apart, pushing Dixon down to third, before McLaughlin launched the #3 Penske-Chevrolet to the top of the times with a 1m06.534s.

Herta and Pagenaud completed the top six, but defending champion Alex Palou was pushed out of the top six.

Malukas was disappointed that O’Ward wasn’t penalised for holding him up, leaving him eighth, although just ahead of the driver who beat him to last year's Indy Lights title, Kyle Kirkwood.

The AJ Foyt Racing-Chevy driver was ninth, but could be happy with being able to beat two surprise non-graduates to the Fast Six.

Rinus VeeKay of Ed Carpenter Racing-Chevrolet, who has looked strong this weekend, will start 11th behind Ilott while Rossi - the man who Kirkwood will replace at Andretti Autosport next year - was 12th.

None of the top three championship contenders progressed from Q1.

Power meanwhile had been quick enough to progress, but had his best laps taken away for impeding former team-mate Helio Castroneves, so will start a lowly 21st.