Team Penske's Scott McLaughlin held off IndyCar champion Alex Palou to score his second win of the season at Mid-Ohio.

McLaughlin took advantage of a full course caution caused by Kyle Kirkwood to leap from second to lead 45 of the 80 laps.

The three-time Supercars champion came under pressure from Palou in the closing stages but was able to hold off the Spaniard to claim his second career IndyCar win. Penske team-mate Will Power charged from a first-lap spin to claim third.

From pole, Pato O’Ward’s Arrow McLaren SP made a strong start ahead of McLaughlin’s Team Penske entry while Felix Rosenqvist, the highest starter on primaries, immediately got around Colton Herta’s Andretti Autosport to get third and threaten McLaughlin, while Scott Dixon and Simon Pagenaud filed through fifth and sixth.

Next time by, Palou was threatening Pagenaud, while Kirkwood moved his AJ Foyt Racing-Chevy past David Malukas of Dale Coyne Racing, despite being on primary tyres. Further back, Will Power’s day went from bad to worse, as he nudged into Takuma Sato’s Coyne car and half-spun at Turn 9, dropping the Aussie to the back of the field.

Up front, O’Ward wasn’t escaping from McLaughlin, running just a second clear by Lap 8, while team-mate Rosenqvist was third on his primary tyres, 0.8s behind McLaughlin, 0.8s ahead of Herta. However, the following lap, the immensely unlucky Swede’s car suddenly slowed off Turn 2 and stopped at Turn 4 with an expired Chevrolet engine. Under the subsequent caution, Graham Rahal, Power and Jack Harvey pitted, the two RLL cars took on Firestone alternates, while Power fitted primaries. At the restart, Power would pass Rahal and Jimmie Johnson.

The restart on Lap 11 saw six-time Mid-Ohio winner Dixon get around Herta to move into third, and the AA driver had to work hard to joust hard with Pagenaud to retain fourth place. Malukas took advantage of his reds coming up to temperature quicker than Kirkwood’s primaries to move past his 2021 Indy Lights rival and gain seventh. In ninth ran Alexander Rossi, pressing Kirkwood, with Callum Ilott completing the Top 10 ahead of Josef Newgarden and Rinus VeeKay who were both on primaries.

Newgarden and VeeKay pitted at the end of Lap 23, and emerged in 23rd and 24th, while Romain Grosjean pitted his Andretti Autosport on the following lap. Palou and Helio Castroneves stopped on Lap 25, and Malukas, Rossi and Ilott did the same on Lap 26.

Up front, O’Ward was only 0.77s ahead of McLaughlin, with Dixon only 1.1s further back, and Herta only 0.9s behind the Ganassi driver. After 29 laps, O’Ward and Dixon pitted, with McLaughlin and Marcus Ericsson and Power stopping next time by. However, this was just before Race Control threw a full-course caution, as Kirkwood, who had just pitted to switch from primaries onto alternates, had gone off course and stopped at Turn 9.

The big beneficiary from the undercut, stopping four laps before O’Ward and Dixon, was Palou, who had taken on another set of Firestone reds, set some blistering laps and jumped to second place, behind McLaughlin whose Penske #3 crew had got him out ahead of O’Ward, who was now third ahead of Herta, Dixon and other early stoppers Newgarden and VeeKay.

Another driver to benefit from making a late stop before the yellow was called was Power, who had legitimately climbed to 18th beforehand, but now gained a further six places. 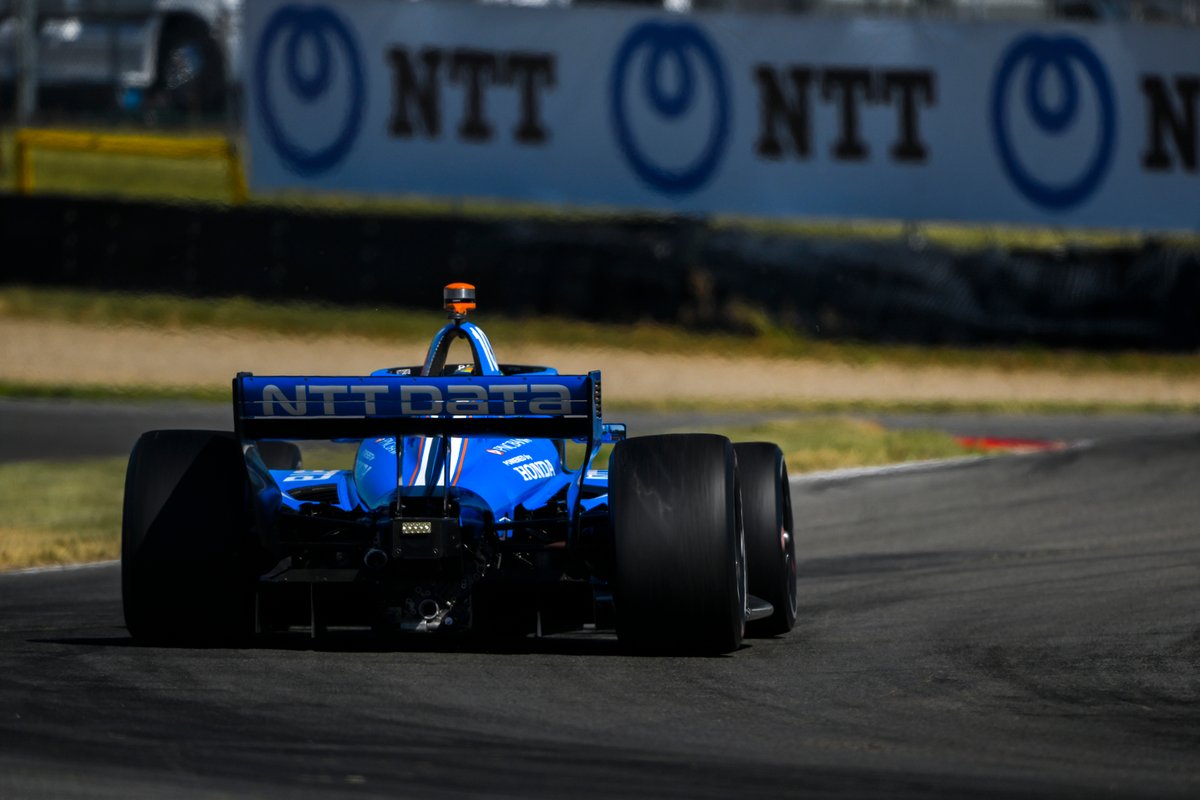 On the Lap 36 restart, McLaughlin – now on the harder primaries – slithered out of Turn 2, the Keyhole hairpin, which allowed Palou to close up. But the caution flew again as Harvey ran AJ Foyt Racing’s Dalton Kellett off the track at the Keyhole. That didn’t happen before Rossi had passed Malukas for 10th.

The next restart on Lap 40, saw Dixon defending fifth so hard from Newgarden through Turn 4, that the pair of them didn’t notice VeeKay carrying so much more momentum into Turn 5, and the bold ECR driver drove around the outside of both Newgarden and Dixon at Turn 6 to gain fifth. His charge wouldn’t stop there, either, for O’Ward was struggling with an engine issue – possibly down to fuel feed problems. O’Ward would lose out to Dixon and Newgarden on Lap 44 and Marcus Ericsson Lap 45.

Also making strong progress was Power who demoted Malukas, Pagenaud and Rossi to move into ninth. That became eighth as the crippled O’Ward continued to drop down the field.

Newgarden pitted at the end of Lap 52 as the next pit window opened, and grabbed a set of fresh alternates. To cover off the potential undercut, and in response to an imminent yellow flag for Tatiana Calderon going off track at Turn 4, the rest of the frontrunners pitted, too. Herta, however, stayed out and his race was now ruined as he would lose several places as the field was bunched and the pits was closed.

The pitstops saw McLaughlin emerge ahead of Palou with Power out ahead of Newgarden, while both O’Ward and Ilott went out with engine issues.

At the restart Palou pressured McLaughlin, and Power passed VeeKay for fourth at Turn 4, while team-mates Rossi and Grosjean came together at Turn 2 and brought out yet another yellow. Under this yellow, Herta stopped and dropped down the order before being nudged off at Turn 2 by Grosjean. Both Grosjean (for the Herta collision) and Rossi (for later nudging off another teammate, Devlin DeFrancesco at Turn 6) would serve drive-through penalties.

The Lap 63 restart saw Palou drop a wheel out of Turn 1, but kept it all together to easily hold off Power down to Turn 2. Behind Power – the lead driver on alternate tires – VeeKay held off Scott Dixon – who was pursued closely by Ericsson and Newgarden. Then came Castroneves, who charged past Malukas, and team-mate Pagenaud to move into eighth. With 10 laps to go, the top three were one second apart, with VeeKay a further 3sec back.

The battle up front was a stalemate, with Palou burning up his overtake boost trying to catch McLaughlin. Their battle took them around three seconds clear of Power, who was now nursing his red tyres and conserving his own push-to-pass which he had used so much in the early laps.

McLaughlin crossed the line 0.551s ahead of Palou to score his second IndyCar win in superbly composed fashion, thereby pushing Penske’s win tally at Mid-Ohio to 12, one ahead of Ganassi.

Power delivered a third place from 21st on the grid – from 27th on Lap 1 – to close to within 20 points of championship leader Ericsson, who finished right behind Dixon and right ahead of Newgarden. VeeKay could be satisfied with a fine fourth, especially after his stunning pass of Dixon and Newgarden.