The three-time and reigning Supercars champion started only 15th after inclement weather compressed the Saturday schedule at Texas Motor Speedway and forced IndyCar to cancel qualifying, and instead base the grid on entrant points.

However, he moved up through the field as several rivals pitted slightly early – just before the first caution for Sebastien Bourdais’ crash. That, combined with a great pitstop from the #3 Penske crew, meant McLaughlin started the second stint in sixth.

A second strong stop – and a good in-lap and out-lap – vaulted him up to third and, when Felix Rosenqvist suffered a nightmarish third stop, McLaughlin found only Scott Dixon ahead at the final restart.

McLaughlin then held off Pato O’Ward at the drop of the green and pressured Dixon but fell a quarter of a second short.

“I had a tremendous amount of fun, about as much fun as I thought I was going to have,” he said.

“We also had great strategy calls, pitstops - the crew on pit road were unbelievable, I have to thank them a huge amount.

“It's a big thing taking on my first oval race - I just tried to get through the first few laps.

“I was pretty cautious – probably too cautious in my first stint, just sort of worked up to it.

“I managed to dodge the Bourdais wreck, which was pretty close for me. Then the Hinchcliffe one, which put us right there.

“It's definitely the most happy I've ever been finishing second.

“It's one of those things that’s a little bit unexpected just because I knew how tough it was going to be sort of getting through the field.

“But, yeah, things fell our way. For it to happen on an oval is a pretty proud moment.

“I've worked very hard behind the scenes looking at footage, talking to my team-mates about where we can get better.

McLaughlin, for whom this was only a fourth IndyCar start, admitted he was slightly awestruck to be tailing his hero in the final stint. 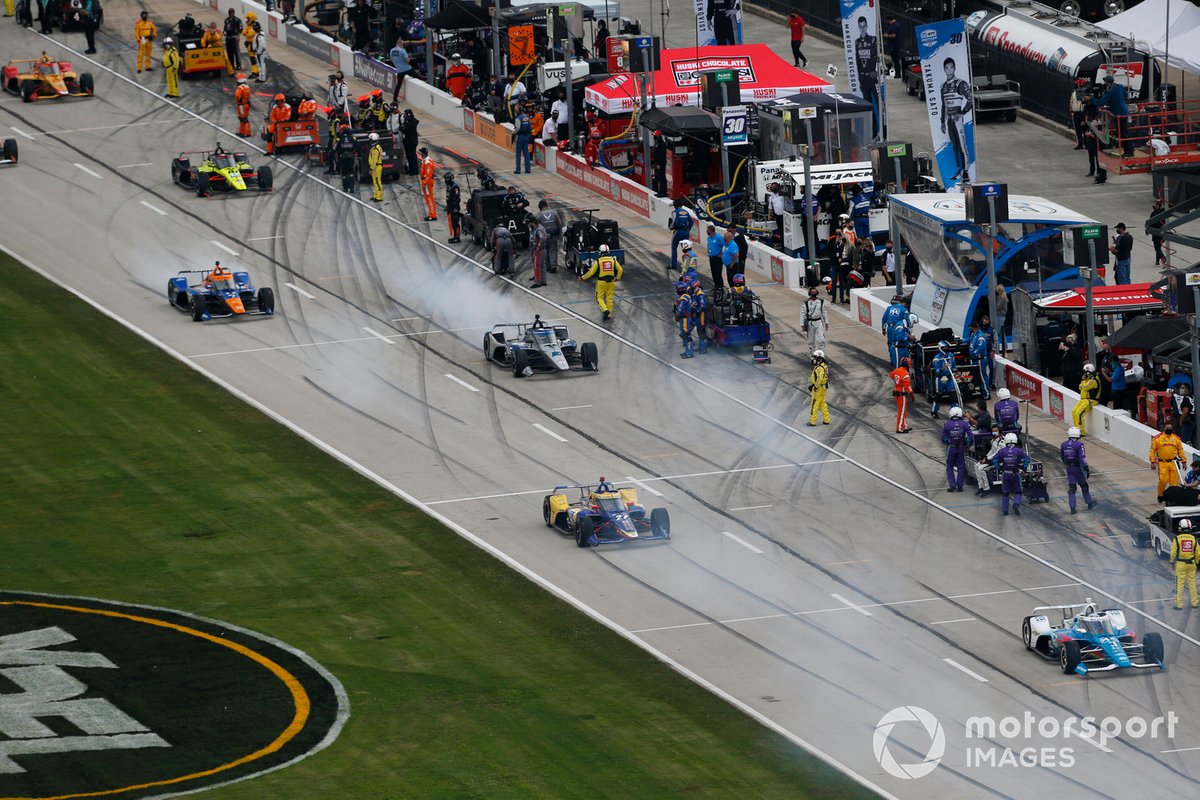 McLaughlin leads Rossi out of pitlane.

“I've been watching Scott since really 2001 when he first joined PacWest, around that time,” said McLaughlin.

“So, to follow him and race him towards the end, have genuine pace for him, was pretty cool.

“I said to the guys in the caution period, ‘This is pretty cool, isn't it?’ I think they were trying to calm me down a little bit. It was cool.

“I'm probably too happy finishing second. Definitely you won't get me like this ever again!

“It's very surprising to get a result on the oval - you have the confidence to be able to do it, but there's a lot to learn.

“We put ourselves in a good spot today with strategy, my in and out laps were good.

“That was how we have to move forward and we certainly did. Very proud to be there or thereabouts.”

Regarding what he had learned for Sunday’s longer (248-lap race) McLaughlin replied: “How I need to sort of adjust my driving style, what changes inside the car I can do to help me in dirty air, stuff like that. What moves I can do.”