Newgarden led much of the race but his reigning champion team-mate Pagenaud made the most of an out-of-sequence four-stop pit strategy to move into the lead on lap 65 of the 85 lap race.

Newgarden's championship triumph is Penske's 15th IndyCar crown, and is also the first for an American driver since Ryan Hunter-Reay won the 2012 title.

Penske's four drivers entered the race all in the championship hunt along with Ganassi driver Scott Dixon.

While Newgarden's second place was more than enough to secure the championship, Pagenaud's win moved him from fourth to second in the standings.

Dixon slipped from second to third after finishing the race in fourth place.

He still prevented Penske from taking a clean sweep of the top four championship positions, with Helio Castroneves and Will Power rounding out the top five in the points.

The race was a largely processional affair, the first Sonoma IndyCar event run without a single caution since 1970. The only real change of lead came via Pagenaud's unconventional pit strategy. 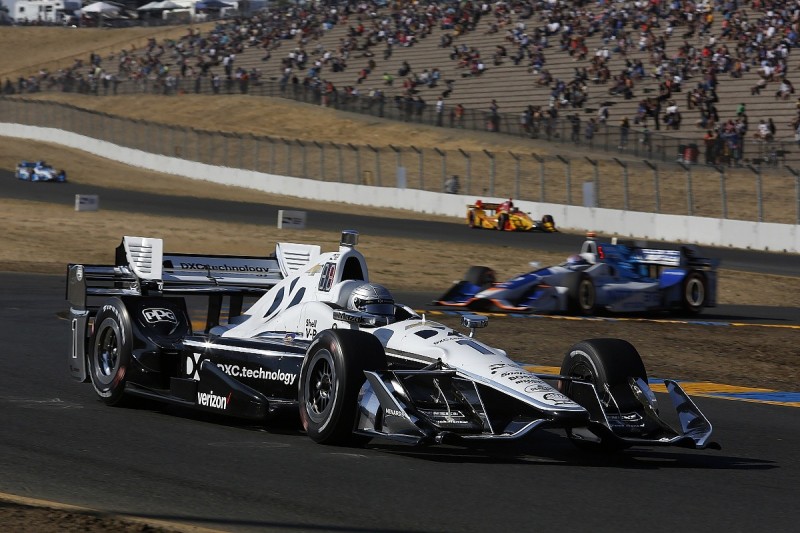 The championship five remained in the top five from start to finish, with Power taking the final podium spot and Castroneves fifth behind Dixon.

Away from the title battle, Graham Rahal made up three places to finish the race in sixth, one spot ahead of Marco Andretti - who was competing in his 200th IndyCar race.

Dixon's best hope of assistance from his Ganassi team-mates ended on the opening lap when Tony Kanaan, in what is set to be his final race with the team, suffered a puncture.

Takuma Sato was another victim of a blown tyre. After being the only non-championship contending driver to start in the top six, he dropped out of contention early on with a puncture on lap seven, before retiring with engine trouble 18 laps from the end.

Sato's Andretti team-mate and fellow Indianapolis 500 winner Alexander Rossi, who began the race as a massive outsider in the championship fight, also suffered from engine issues. His race ended on lap 25.

Zachary Claman DeMelo was the highest placed rookie in his very first IndyCar race. He finished in 17th, ahead of fellow rookies Jack Harvey and Ed Jones.

Scott Dixon: Ganassi at 'deficit' to Penske in IndyCar decider