The Andretti driver started in ninth, and began his move into the lead when he jumped from fifth to second with a great restart on lap 185.

That later turned into the lead when he emerged ahead of Josef Newgarden after the next round of stops, and from there on he capitalised on the clean air ahead to secure his third win at the venue in four years.

"It was going to be tough to beat everyone today, but this car was on rails at the end," he said.

"I was driving the snot out of it. It was loose and I just kept my foot on the floor. This is just amazing.

"We're having a tough year, but we got the thing into victory lane in one of the most competitive IndyCar seasons ever."

Newgarden, who led the most laps, remained clamped to Hunter-Reay's rear wing during the final stage, but he was unable to break out of the turbulence on the final restart and had to settle for second.

The pair finished 1-2 at the same race last year.

"It was tough," said Newgarden. "I really feared that if we were going to get into a shootout situation and we weren't leading it was going to be hard.

"You can't beat running around Iowa in an Indycar, it's unbelievably fun, but I'm disappointed."

Sage Karam completed an all-American podium - the first since the 2006 Indy 500 - with a swashbuckling final couple of stints, although the Ganassi rookie's aggression drew the ire of Ed Carpenter, who hunted the 20-year-old down in pitlane immediately after the race, following a particularly robust battle towards the end.

"I told him that he has no respect for anyone," Carpenter, who had to settle for sixth, said.

"If it wasn't for guys with experience driving with their heads on he would have crashed.

"I had a car that was good enough for third or fourth, and I got on the brakes and saved his butt and he got rewarded with the podium. 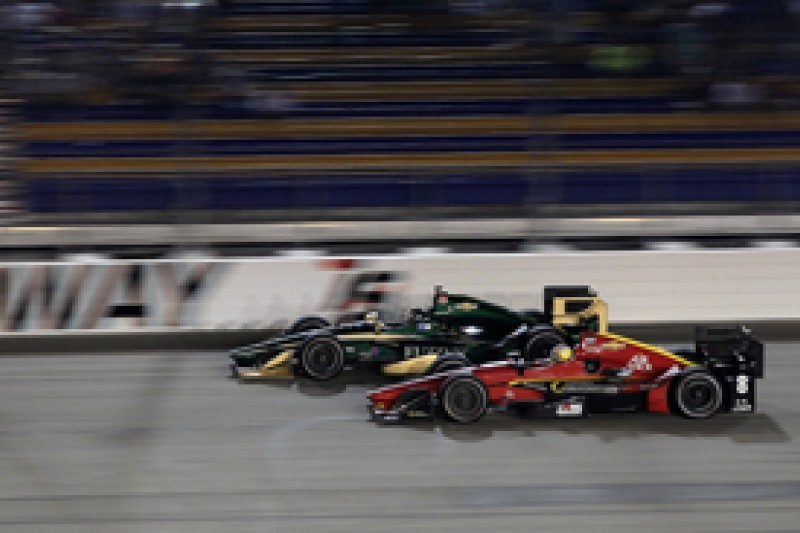 "He should have been penalised on the spot."

"He was just angry with my driving," he said.

"He says I squeezed him a few times. But it's the same way he drove me.

"This isn't go karts, this is IndyCar and we're professionals and we know each other's limits.

Graham Rahal secured a remarkable fourth from a race in which he fell two laps down with a puncture, recovered back onto the lead lap, lost another lap with a shifting problem, got back onto the lead lap again with the help of a lucky yellow, and then cut through the pack to finish within sight of the podium.

The RLL driver also moved up to second in the points after an evening of problems for all of the other championship contenders.

Points leader Juan Pablo Montoya appeared to open the door for his rivals early on, when he suffered a suspension failure and hit the wall on lap 10: his first DNF since this race last year.

However Montoya's crash was the precursor a remarkable chain of disasters: Tony Kanaan's potentially race-winning car vanished with a mechanical problem; Scott Dixon appeared primed to take a huge slice out of Montoya's points advantage but then suffered a broken upright; polesitter Helio Castroneves faded out of contention mid-way through the race.

Elsewhere, a number of other drivers were eliminated by single-car accidents including Stefano Coletti, Takuma Sato and Charlie Kimball, while Justin Wilson was lucky not to join their ranks after Pippa Mann took the air off his front wing and prompted a glancing blow against the outside wall.