Frye has revealed IndyCar's current regulatory path was set between 2015 and '16 in collaboration with non-series manufacturers it had been in talks with, as well as current competitors and partners.

Senior IndyCar figures are known to have spent time travelling and meeting with potential third manufacturers in the 2017 off-season, and removing aerokit development from the rules was said to have been greeted positively by potential future entrants.

The series has now launched its new 2018 car complete with the new universal aerokit as part of its five-year plan, and Frye told Autosport last month that adding a third manufacturer alongside Chevrolet and Honda was a "massive priority".

"[In] the winter of 2015 we started talking about the aerokits and the future and where we wanted to go collectively as a group," said Frye.

"Simultaneously we started talking to some other OEM prospects and based on all those conversations we really got to this point. So in March of '16, we came up with a vision of what it could look like.

"The vision was through collaboration with our OEM partners, our teams, our paddock, and the fans.

"I think this will be the centrepiece of this five-year plan that we have in going forward."

Chevrolet took a "leap of faith" to join IndyCar 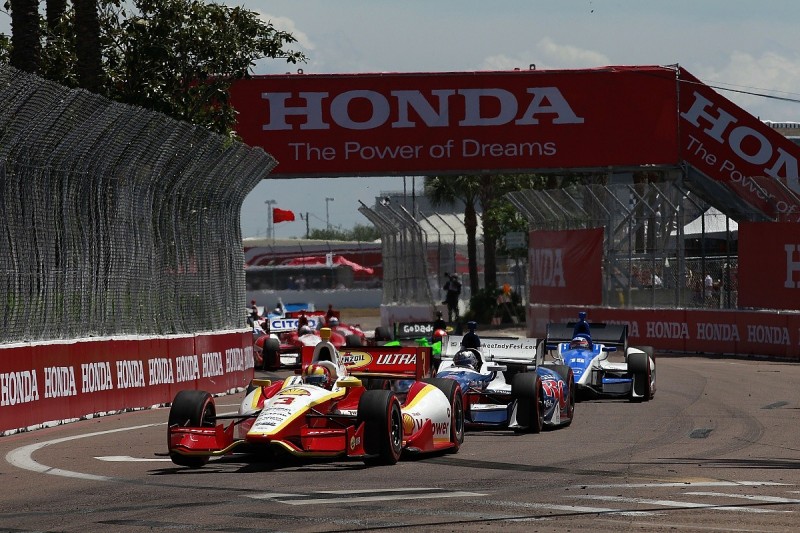 Chevrolet has admitted it had to take a "leap of faith" to join IndyCar for 2012 (St Petersburg season-opener pictured above) given the series' struggles in the final years of its previous rules package.

Honda had been the only supplier before Chevrolet joined, while Lotus managed only a single season in 2012 after a dismal campaign.

"A few years ago when we sat down and put this engine programme together again to get back into this sport, it was a little bit of a leap of faith," he said.

"But I can tell you that the new crew here with Jay, CJ [O'Donnell, chief marketing officer] and Mark [Miles, CEO] have done a great job of growing the sport.

"The twin-turbo V6 is something where we take that technology - like the fuel injection piece of that and the direct injection - and take it right into our passenger cars and crossovers, so there's a great engineering technical exchange.

"There's a great fanbase we reach, and it's in a place that's now growing again, and I couldn't be happier for American motorsports and open-wheel racing."