IndyCar champion Josef Newgarden says he was "steaming" at missing out on race victory in the Sonoma finale, despite winning the title

Newgarden had taken pole for the double-points decider, but lost out to Penske team-mate Simon Pagenaud in the race after the 2016 champion chose an alternate four-stop strategy and took the lead on lap 65 of 85.

The new champion's point buffer was more than enough to ensure second place would secure the title but, when asked if he was disappointed to miss out on the race win, Newgarden said: "Oh, 100%. I'm not joking. I was kind of steaming inside the car.

"This is probably the most gruelling race you'll run every year just because of the tyre degradation and the way this track drives.

"It is the most difficult race that you will put together; physically, mentally, it's draining.

"So when you feel like you've done everything to win the race and you don't win it, it's very annoying as a racer. So I hated that."

Newgarden added that Penske president Tim Cindric had to remind him of the bigger picture.

"Tim was coaching me through, thinking about it [the title], and it's a team effort, so I had to be smart about it, and that gave me a lot more gratification than just losing the race," he said. 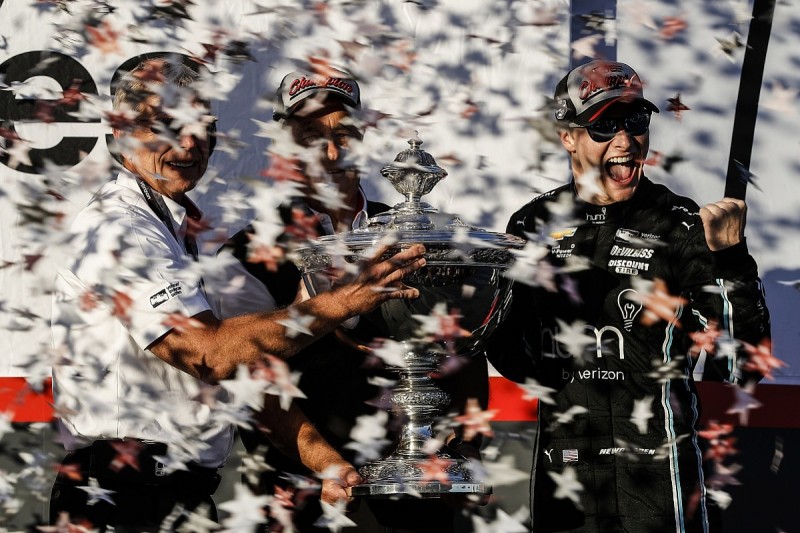 Newgarden said he always believed the title fight would be resolved at Sonoma, and that helped him get over his costly crash at Watkins Glen.

The then-championship leader crashed in the pit exit while racing team-mate Will Power and had his 31-point lead slashed to just three, with 104 on offer at Sonoma.

But Newgarden said his title race perspective allowed him to process the crash.

"I was pissed at myself for making a mistake," he said. "I always get pissed when I make a mistake.

"The way I always looked at the championship was it was going to come down to Sonoma, and I don't know if it's a good way or bad way to view it but it's the way I viewed it and the way I was playing it was that Watkins didn't matter.

"Looking back on it, I feel like that's kind of a mistake.

"I think I'd play it differently now after what happened at Watkins Glen, but at the end of the day it did come down to this race."