Penske and Ed Carpenter Racing led a Chevrolet-dominated 'Fast Nine' Indianapolis 500 qualifying, while 2016 polesitter James Hinchcliffe was a high-profile victim of bumping and will not start the race

A disrupted morning of testing thanks to two rain delays put pressure on the IndyCar field, but it produced a relatively settled Fast Nine compared to the bumping at the other end of the field.

Penske's Helio Castroneves was able to set his benchmark average speed of 228.919mph early in the session before rain and an increase in humidity slowed the track down.

His lap speed was not threatened until the final driver, Ed Carpenter, headed out for his opening four-lap qualifying run.

The Ed Carpenter Racing boss looked set to take the fastest time after a first lap of 229.266mph, but fell away and ended up second with a 228.692mph average.

That meant he split the leading Penske drivers, who backed up the underlying pace the team showed in this week's practice.

Simon Pagenaud was third with the benefit of being the last driver to run before the first rain delay.

That meant Will Power, who had continually been the fastest driver without a tow this week, could only go fourth.

Dale Coyne Racing's Sebastien Bourdais was one of only two Honda-powered drivers to make the Fast Nine in fifth, with Chip Ganassi Racing's Scott Dixon eighth.

Danica Patrick was the last driver to secure a place in the Fast Nine ahead of the final race of her career.

She had to survive an attempt from Andretti's Alexander Rossi in the final moments, but his final lap left him less than a tenth of a mile an hour short of making the cut.

There was similar and more intense drama at the other end of the field to make the 33-car cut, as Dale Coyne Racing's duo Pippa Mann and Conor Daly traded laps with Oriol Servia. 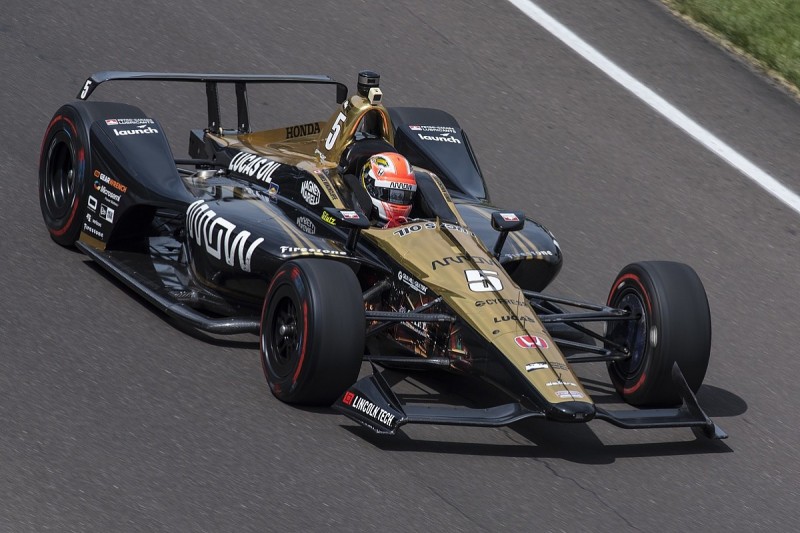 That dragged Schmidt Peterson Motorsports driver Hinchcliffe (pictured above) into the fray, Hinchcliffe having been the first competitor to run after the second rain delay.

Servia's first attempt was botched when rain arrived, and he visibly battled with the balance of his car on his second run.

But his third attempt was enough to elevate him to 31st and out of trouble, while Daly's third run elevated him to 32nd after struggling throughout the week following a late build of his car.

That left AJ Foyt Racing's James Davison on the bubble in 33rd, but repeated attempts from Mann never put her in contention to make the race.

Hinchcliffe's agonising fate was sealed when his second run was ruined by a vibration that forced him to abort that attempt.

He then became stuck waiting for Mann's third run to end, and the clock ticked down before he could take to the track - eliminating him from qualifying.

The grid positions for the 102nd Indy 500 will be set in Sunday's second qualifying session.