Rahal bounced back from a difficult Wednesday to top the following day's practice session after an early qualifying lap simulation.

Hildebrand had the first on-track accident of the week on Thursday when he ran high out of Turn 3 and collided with the outside wall at Turn 4, sustaining minor damage.

Rahal said he could have had a similar incident to Hildebrand's on multiple occasions.

"I can't tell you how many times I thought I was going to be in that scenario today [Thursday] where the right front tyre is so overworked, you have so much slip angle in it, it just gives up," he said.

"When it gives up, it's like ice and then bang, you hit a kerb. You turn in to a neighbourhood, it doesn't turn. We've all done it. That's exactly what it feels like.

"It's difficult because you don't know what a fine line is. Sometimes it's slide, slide, slide, then OK. Other times it never comes back.

"I think the further back you are [in the race], you have to hang on. These cars, you have to drive the you-know-what out of them.

"The rear is sliding around, the front is pushing. It's not pretty, that's for sure.

"But the one thing it does do, if you do get a tow, it is massive. When you get 10 car lengths back, the acceleration rate is unbelievable.

"Takuma [Sato] and I were even joking about it. 'Do you want to lead the last lap or not?'

"Where do you place yourself if you're in that position in the race? I don't know. If you're leading, you could be in trouble."

Rahal said the new car package is dramatically different to how the manufacturer aerokits behaved.

"A lot of it is trying to understand the way that it wiggles," he said. "It sounds ridiculous, but it's true.

"We're used to the old car. This car is a different animal. 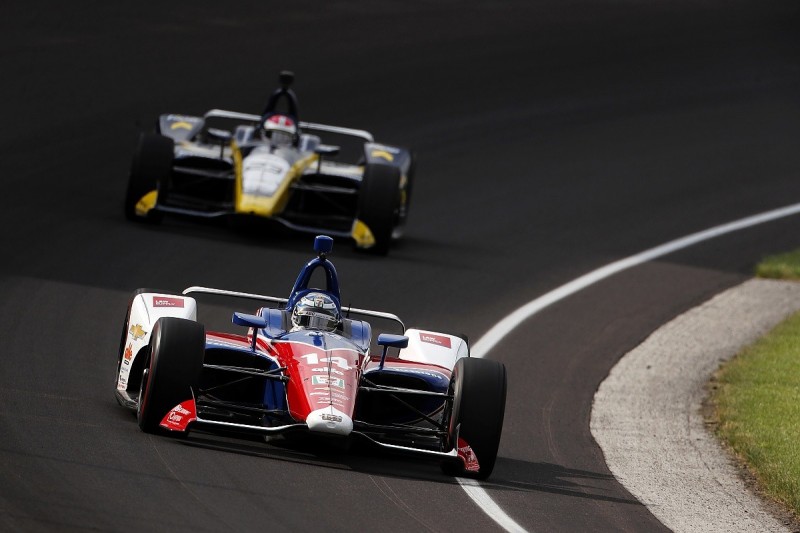 Tony Kanaan, who was second in Thursday's practice, said the car is completely different to its predecessor in traffic.

"It's a whole different beast," said Kanaan. "If you see how many people did long runs this week, I think [it] is the most that we've done in a long time.

"I won't worry about qualifying until tomorrow [Friday], because everybody is really concerned how these cars are going to race as far as downforce, how we're going to run in traffic.

"Running in a pack like this, it's not as representative as the race. Sometimes you have people trying to back off and let you by."

The rivalry that will define IndyCar's next decade