Wickens had comfortably topped group one qualifying and both he and Power eased through the top 12 into the fast six.

Their battle intensified after Power completed a one-lap tour on red scuffed tyres before switching to another used alternate set of tyres.

Wickens had initially jumped to the top of the times, but Power responded with a benchmark of 1m09.8182s.

The SPM driver hit back but fell 0.0870 seconds short of Power to seal second on the grid, and admitted to being "gutted" to miss out after what he called a scruffy lap.

Dale Coyne Racing's Sebastien Bourdais figured in the fight for pole but ended the fast six in third ahead of SPM's James Hinchcliffe.

Jordan King was an impressive fifth for Ed Carpenter Racing, having recovered from a brake problem that restricted his group one running and required a late dash into the 12-car session.

He then made a late lap good enough to secure a place in the top six, with a similar effort enough to allow Josef Newgarden into the final stage.

The 2017 IndyCar champion will start Saturday's race in sixth, having bumped team-mate Penske Simon Pagenaud down to seventh with his late surge.

Pagenaud believes he has now made a breakthrough in the "feeling" of his Penske-run car, and he will start ahead of Andretti's Alexander Rossi. 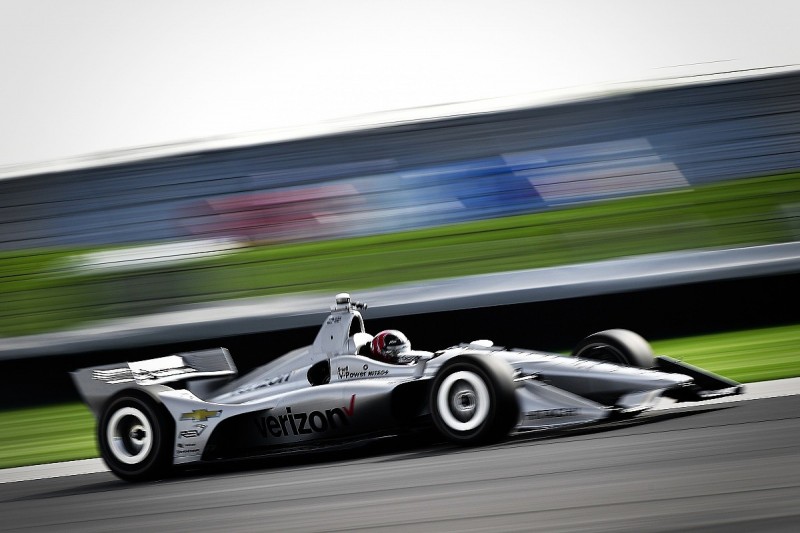 ECR's Spencer Pigot was ninth ahead of the returning Helio Castroneves (pictured), who showed glimpses of promise with fifth in group one qualifying on the slower black tyres - the only driver to use them.

But Castroneves earned a five-minute penalty for Saturday's warm-up because he took the chequered flag twice.

Last year's Indianapolis 500 winner Takuma Sato began his Month of May defence with 11th for Rahal Letterman Lanigan Racing ahead of Tony Kanaan.

Ryan Hunter-Reay could only take 13th after complaining of balance issues in his Andretti-prepared car.

Chip Ganassi Racing's struggles continued with Ed Jones and Scott Dixon unable to get out of their groups, leaving them starting 15th and 18th respectively.

Zachary Claman de Melo returned to IndyCar early as a stand-in for the injured DCR team-mate Pietro Fittipaldi and failed to advance from his group, qualifying 19th.